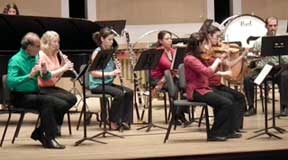 Mirage of the Mountains

is a work for chamber orchestra that finds its pitch material from the spectral analysis of two pitches on the contrabass, F1 and C1. The title, Mirage of the Mountains, comes from the idea that a spectral analysis of a sound and the physical characteristics of a mountain share similar properties. The lowest part of a mountain is less steep and much wider at the base, just as the first partial of a spectral analysis is wider in distance and more audible because of its sound properties. Similarly, as the terrain closer to the top of a mountain becomes more jagged, steep and narrow with more frequent peaks, the higher partials of a spectral analysis also become more frequent in relation to others preceding and following it. When looking at a mountain from a distance, it is also hard to discern all of the peaks that occur near the top, just as it is hard to discern each upper partial of a sound, but each small peak help to give each their own unique characteristics.

Zach Zubow's music has been featured on many new music conferences and festivals throughout the United States and abroad. Zach was named regional winner in the 2011 SCI/ASCAP Student Composition Commission Award for his string quartet, Sundown, which also received the 2012 College Music Society Mid-Atlantic Composition Award. He has also received awards from the 2011 Five College Composition Competition and the 2012 College Music Society Southern Region's Composition Competition. Zach has received degrees from Luther College, Illinois State University and is now pursuing a PhD in music composition at The University of Iowa. For more information please visit www.zachzubow.com.

When I began work on this String Trio in the autumn of 1976, it was partly by way of giving myself a tonic. I was 'on the rebound' from a very different kind of operation—a large-scale, deeply subjective piece—and I wanted to refresh myself my working on the minutest scale, both with regard to medium and musical thinking. I started 'doodlin': composing what I thought would be a modest collection of bagatelles. Four years later, with twenty-seven such bits and pieces on my hands, I still felt the medium of the string trio to be inexhaustible.

As usual with me, one of the strongest stimuli had been the musical character and sound of the players for whom I was writing: the members of the Arditti Quartet. Another was my reawakened delight in all forms of miniature artistry: not only the supreme musical models of Couperin, Beethoven, Scriabin, Webern and many others; but also, for instance, the poetry and artefacts of the Far East; Blake's wood-cuts; the daily jottings of Baudelaire—what he called his 'squibs'; the drawings of Watteau—where the subject is sometimes reduced to a mere fragment of costume or a girl's nostrils.

"Croquis" means 'sketch'; and in this collection—as in any album—there is to be found not only finished work, precisely organized, but also the odd scribble, dashed off: as it were, provisional. The pieces are gathered together in three 'Cahiers', or portfolios, and can be performed in a number of different ways: as a framework, as fillers or as an anthology. Tonight's programme takes the latter approach, collecting movements from each of the three portfolios to make a coherent statement of about 12 minutes.

Recent work includes: Stelae, a large-scale piece for gamelan; Nightpiece for soprano and two bass viols; a collection of pieces for organ; and a few tangos.

One definition of musica segreta—a genre associated with the late Renaissance—speaks to its intended use for a private, informed, and limited audience, an audience "in the know" both in terms of stylistic concerns (syntactical, grammatical and otherwise), and allusional associations specific to the work in question. This composition was written for a concert in honor of Glenn Watkins upon his retirement from the University of Michigan and is dedicated to him. He is the author of Gesualdo: The man and his music, for which Stravinsky wrote the preface. The work also makes use of a hexachord, extracted from the seven-note set found in Boulez's '…explosante-fixe…' which was written to the memory of Igor Stravinsky. Hence the quartet of characters: Gesualdo, Stravinsky, Boulez, and Watkins.

David Gompper has lived and worked professionally as a pianist, a conductor, and a composer in New York, San Diego, London, Nigeria, Michigan, Texas and Iowa. He studied at the Royal College of Music in London with Jeremy Dale Roberts, Humphrey Searle and Phyllis Sellick. After teaching in Nigeria, he received his doctorate at the University of Michigan, taught at the University of Texas, Arlington, and since 1991 has been Professor of Composition and Director of the Center for New Music at the University of Iowa. In 2002 – 2003 Gompper was in Russia as a Fulbright Scholar, teaching, performing and conducting at the Moscow Conservatory. In 2009 he received an Academy Award from the American Academy of Arts and Letters in New York City.

Gompper's compositions have been performed in such venues as Carnegie and Merkin Halls (New York), Wigmore Hall (London), Konzerthaus (Vienna) and the Bolshoi Hall (Moscow). Wolfgang David and the Royal Philharmonic Orchestra recently recorded his Violin Concerto for a Naxos CD. His song cycle The Animals, based on the poetry of Marvin Bell and written for Stephen Swanson, will be released on an Albany disc later this year.

"The Chamber Symphony, written for 15 instruments, bears a suspicious resemblance to its eponymous predecessor, the opus 9 of Arnold Schoenberg. The choice of instruments is roughly the same as Schoenberg's, although mine includes parts for synthesizer, percussion (a trap set), trumpet, and trombone. However, whereas the Schoenberg symphony is in one uninterrupted structure, mine is broken into three discrete movements, 'Mongrel Airs', 'Aria with Walking Bass', and 'Roadrunner'. The titles give a hint of the general ambience of the music.

"I originally set out to write a children's piece, and my intentions were to sample the voices of children and work them into a fabric of acoustic and electronic instruments. But before I began that project I had another one of those strange interludes that often lead to a new piece. This one involved a brief moment of what Melville called 'the shock of recognition': I was sitting in my studio, studying the score to Schoenberg's Chamber Symphony (1906), and as I was doing so I became aware that my seven-year-old son Sam was in the adjacent room watching cartoons (good cartoons, old ones from the '50's). The hyperactive, insistently aggressive and acrobatic scores for the cartoons mixed in my head with the Schoenberg music, itself hyperactive, acrobatic and not a little aggressive, and I realized suddenly how much these two traditions had in common.

"For a long time my music has been conceived for large forces and has involved broad brushstrokes on big canvasses. These works have been either symphonic or operatic, and even the ones for smaller forces like Phrygian Gates (1977), Shaker Loops (1978), or Grand Pianola Music (1982) have essentially been studies in the acoustical power of massed sonorities. Chamber music, with its inherently polyphonic and democratic sharing of roles, was always difficult for me to compose. But the Schoenberg symphony provided a key to unlock that door, and it did so by suggesting a format in which the weight and mass of a symphonic work could be married to the transparency and mobility of a chamber work. The tradition of American cartoon music — and I freely acknowledge that I am only one of a host of people scrambling to jump on that particular bandwagon — also suggested a further model for a music that was at once flamboyantly virtuosic and polyphonic. There were several other models from earlier in the century, most of which I come to know as a performer, which also served as suggestive: Milhaud's La Creation du Monde (1923), Stravinsky's Octet (1922-1923) and L'Histoire du Soldat (1918), and Hindemith's marvelous Kleine Kammermusik (1923), a little known masterpiece for woodwind quintet that predates [the cartoon] Ren and Stimpy by nearly sixty years.

"Despite all the good humor, my Chamber Symphony turned out to be shockingly difficult to play. Unlike Phrygian Gates or Pianola, with their fundamentally diatonic palettes, this new piece, in what I suppose could be termed my post-Klinghoffer [Adams' opera from 1991] language, is linear and chromatic. Instruments are asked to negotiate unreasonably difficult passages and alarmingly fast tempi, often to the inexorable click of the trap set. But therein, I suppose, lies the perverse charm of the piece. ('Discipliner et Punire' was the original title of the first movement, before I decided on 'Mongrel Airs' to honor a British critic who complained that my music lacked breeding.)

John Adams (b. 1947) is one of the best known and most often performed of America's composers. He received both his BA and MA degrees from Harvard University, where he was active as a conductor, clarinetist, and composer. His principal teachers included Leon Kirchner, David Del Tredici, and Roger Sessions.

In 1971 Adams began an active career in the San Francisco area, teaching at the San Francisco Conservatory of Music (1972-83) and serving as new music adviser and composer-in-residence for the San Francisco Symphony (1978-85). His creative output spans a wide range of media: works for orchestra, opera, video, film, and dance, as well as electronic and instrumental music. Such pieces as Harmonium, Harmonielehre, Shaker Loops, and The Chairman Dances are among the best known and most frequently performed of contemporary American music. In these works he has taken minimalism into a new and fresh terrain characterized by luminous sonorities and a powerful and dramatic approach to form.