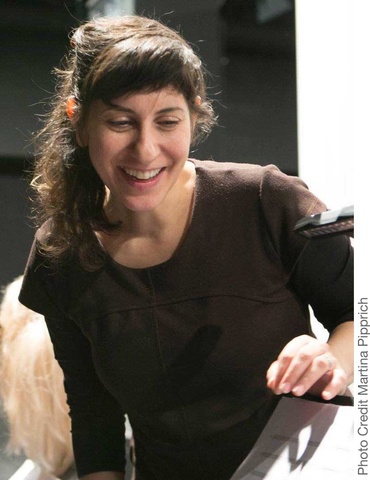 Sivan Cohen Elias's work as a composer is cross-disciplinary, using the body, objects, installations, technological interventions and musical instruments to all constantly contribute to, and disrupt, one another's domains. Cohen Elias been the recipient of numerous international awards, residencies and commissions, including the Impuls International Composition Competition (2009), the Boost! project Prize Darmstadt (2012), Akademie Schloss Solitude fellowship (2012), and the International Music Theatre Competition Darmstadt Prize (2016). Her opera, Eve&ADINN, premiered in Darmstadt in April 2018.

Born in Jerusalem, her works have been commissioned, broadcast and performed by ensembles and performers (including herself) in and around the United States, Europe, Israel, Scandinavia, and Russia. Collaborators include Klangforum Wien, MusikFabrik, Mosaik, Dal Niente, Distractfold, Mocrep, Jack Quartet, and Nikel, among many others. Festival appearances include Darmstadt Fereinkurse, Bludenz, Wien Modern, Witten, Klangspuren, Ultraschall, and Warsaw Autumn.

After receiving her BEdMus and MMus from the Rubin Academy of Music and Buchmann-Mehta school of Music, respectively, Cohen Elias left her home country and relocated to Vienna for a postgraduate program at the University for Music and Performance Art. In 2009 she commenced PhD composition studies at Harvard University under the guidance of Prof. Chaya Czernowin and Prof. Hans Tutchku, graduating in May 2017.

From 2006 to 2007 Cohen Elias served as the chairperson of the Israel Women Composers' Forum. Throughout her time in Israel, she participated in organizing committees of international new music festivals, including Tzlil Meudcan, dedicated to developing previously non-existent platforms. In 2017 she relocated to Chicago, where she was the Composer in Residence at the Chicago Academy for the Arts. Cohen Elias joins the faculty at the University of Iowa as a visiting assistant professor, teaching applied composition and courses in the Electronic Music Studios.