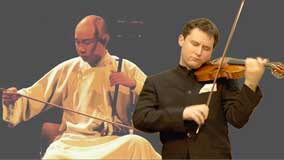 The impetus for today's recital grew out of a concert that took place last year, when Wolfgang David was invited to perform with Guo Gan at the Victoria Hall in Geneva and the UNESCO Hall in Paris. The organizer, Mehri Madarshahi who is president of "Melody for Dialogue Among Civilization Association," engaged them in a concert of Western and Eastern music. She is an active concert promoter in Paris who helps to bring together a dialogue among civilizations, cultures and communities. See: www.melodydialogue.org.

is a collection of three miniatures reflecting Chinese-American culture. The title refers to words of wisdom typically found in fortune cookies, a staple of Chinese restaurants in the United States, but which actually are not Chinese at all. Along these lines, I thought it best to write melodies that reference Chinese tunes, and not by a direct appropriation of folk music. To that end, the combination of erhu and two violins were immediately appealing to me, and the addition of some extended techniques for the piano allowed a balance of sound to create a lighter texture. In "Red Lanterns," the violins and erhu try to "catch" one another. The piano joins in the second movement, "Paper Cranes." This movement is a lyrical solo for the erhu, while the violins emerge from the texture at points to overtake the lines. In "Nine Fish," the main motive is presented in the form of a rondo.

I wish to thank Guo Gan, Wolfgang David, Scott Conklin and David Gompper for the opportunity to write for such amazing musicians.

Ching-chu Hu's music has been performed in the United States, England, Germany, Russia, Austria, China, Taiwan, and Australia. Recent honors have included composer-in-residence at the Piccolo Spoleto Festival, and guest composer at the American Music Week Festival in Sofia, Bulgaria. Hu has been a composition fellow at the Aspen and Bowdoin Music Festivals, Yaddo, The MacDowell Colony, and the Banff Centre for the Arts. He has received performances in various national and international festivals and concerts, including the Alternativa Festival (Center "DOM") in Moscow. Born in Iowa City, Iowa, Ching-chu Hu studied at Yale University, Freiburg Musikhochschule in Freiburg, Germany, The University of Iowa, and the University of Michigan, where he earned his Doctorate of Musical Arts in Composition. He is active as a pianist and conductor, and wrote the scores for several short award-winning films. Upcoming commissioned projects include a work for the Western Springs School of Talent Education Program's 30th Anniversary Concert in Chicago Symphony Center's Orchestra Hall in March, 2010 as well as Newark Granville Youth Symphony's John F. Kennedy Center for the Performing Arts performance in May, 2011. His music can be heard on the ERM Media's "Masterworks of the New Era" CD series (vol. 4), Albany Records CD "Finnegan's Wake" (Troy 680), "Star of the County Down" (Troy 937), "Spirals: American Music in Moscow" (Troy 1095), "Vive Concertante" (Troy 1110-11), "Violinguistics" (Troy 1138) and Capstone Records' "Journeys" (CPS-8809). Ching-chu Hu is Associate Professor of Composition and Theory at and Chair of the Music Department.

A Song for New Year's Eve

Liu Tian-hua ( b. Jiangyin, Jiangsu province, China, 1895; died 1932) was a Chinese musician and composer. He is best known for his reformative work for the erhu.

The opera Thaïs (1894), set in Egypt during the Byzantine rule, is famous for the entr'acte for violin and orchestra entitled Meditation, played between the scenes of Act II.

Jules (Émile Frédéric) Massenet (1842-1912) was a French composer best known for his operas.

is a violin fantasy on themes from the opera Carmen by Georges Bizet. The piece contains an adaptation of the Aragonaise, Habanera, an interlude, Seguidilla, and the Gypsy Dance. Sarasate wrote a number of works for violin and piano or violin and orchestra, including, as might be expected, compositions based on Spanish themes and rhythms. Following the common practice of his time, he also wrote concert fantasies based on themes from popular operas and compositions based on Spanish themes and rhythms. Among these one of the best known is his Zigeunerweisen (Gypsy Airs), together with his Spanish Dances of which the best known remains his Carmen Fantasy.

Pablo de Sarasate, a violin prodigy, was born in Pamplona, Spain and studied at the Paris Conservatoire. He gave concert tours from 1859, playing throughout Europe and both North and South America. A number of pieces were written for him, including Édouard Lalo's Symphonie espagnole, Camille Saint-Saëns' Violin Concerto No. 3 and Introduction and rondo capriccioso and Max Bruch's Scottish Fantasy.

is a brilliant virtuoso piece that reveals the exotic Eastern inflections of the time. Kreisler provides this work a touch of Oriental ambience, although the middle section with its charm and elegance is completely reminiscent of Viennese salon music.

Friedrich "Fritz" Kreisler was an Austrian-born violinist and composer, one of the most famous of his day. Known for his sweet tone and expressive phrasing, he produced a characteristic sound that was immediately recognizable as his own.

This work is part composition, part arrangement of a famous series of Chinese tunes from Mongolian origins. The seven-minute work is in three sections: slow, moderato and allegro.

David Gompper (b. 1954) has lived and worked professionally as a pianist, a conductor, and a composer in New York, San Diego, London, Nigeria, Michigan, Texas and Iowa. He studied at the Royal College of Music in London with Jeremy Dale Roberts, Humphrey Searle and Phyllis Sellick. After teaching in Nigeria, he received his doctorate at the University of Michigan, taught at the University of Texas, Arlington, and since 1991 has been Professor of Composition and Director of the Center for New Music at the University of Iowa. In 2002 - 2003 Gompper was in Russia as a Fulbright Scholar, teaching, performing and conducting at the Moscow Conservatory. In 2009 he received an Academy Award from the American Academy of Arts and Letters in New York City.

Gompper's compositions are heard throughout the United States and Europe. In 1999 his Transitus (for wind ensemble) premiered at Carnegie Hall, and a number of his works have premiered in London's Wigmore Hall, including: Homage a W. A. (William Albright) for piano; and Shades of Love, a song cycle on the poetry of Constantin Cavafy. Subsequent returns to Moscow have included premieres and performances of Crossed, Music in the Glen, Six Love Poems, Star of the County Down, Butterfly Dance, Spirals, "pÿt" (the way), and Ikon.

For more information, consult the his website at www.davidgompper.com.