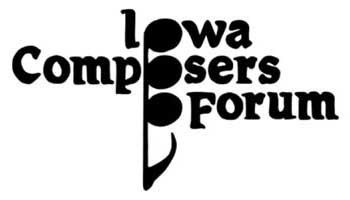 in two movements and written for a virtuoso performer, explores the extreme registers and different colors of the organ. There are two themes of the work: one is dissonant and atonal, often employing polyharmonic chords, and the other is tonal and expressive. In the second movement there is a fugal section leading to the return of a tonal theme in D major. At the end, polyharmonic chords resolve to the work's B-major climax.

Elaine Erickson holds the MM in Music Composition from Drake University, and studied composition at the University of Iowa and at Peabody Conservatory in Baltimore. Her awards and fellowships include the Ford Foundation, the National League of American Pen Women, and the Pyle Commission from the Iowa Composers Forum. She taught composition at Central College in Pella, Iowa, and gives school workshops as an artist for VSA Iowa.

This work is based on a short theme composed for organist Madame Duruflé who visited the Trinity University campus on the Parker Chapel Organ Recital Series in 1993. The theme was the basis for her improvisation that closed her recital. Organist David Heller then commissioned Etude Fantasy the following year and premiered the piece in April 1996. The work explores the various motivic relationships inherent in the theme through a variety of moods and textures.

was commissioned by the Mandel Foundation and Utah Arts Festival for 2012. When starting this piece, I looked for context: the landscape of Utah, the people who settled there, and the Great Salt Lake. The result is six variations based on two ideas: pitch (from the word Ut-A-H) and rhythm (from the famous Mormon hymn: Come, Come, Ye Saints). Overall, the work evokes an image of a storm with a lake effect.

Timothy Kramer's works have been performed widely throughout the world by major orchestras and ensembles and he has received grants from the Guggenheim Foundation, the NEA, the MacDowell Colony, Meet the Composer, BMI, and ASCAP among many others. His degrees are from Pacific Lutheran University and the University of Michigan, and he was a Fulbright Scholar to Germany. He taught at Trinity University (San Antonio) for 19 years and became Chair of the Music Dept. at Illinois College in Jacksonville, Illinois in 2010, where he holds the Edward Capps Professorship in the Humanities. Visit timothykramer.com for more information.

In 2006, I resurrected a wellspring of my musical self. After fifteen years of scrambling for tenure, going through a divorce and raising two children, I found enough slack in my life to return to free improvisation, with which I had once been deeply involved. When I started up again I immediately felt that a lost part of myself had returned; the same feeling occurred when I resumed going to artist colonies and playing jazz in the years immediately thereafter.

Orion is one of a string of pieces I wrote shortly after resuming life as an improviser and which were affected by improvisation in the best possible ways. Because one must let go and let intuition get in the driver's seat when improvising, in these pieces I found myself newly able to tap into something mysterious and vital and to trust it; the resulting music often turned out to be simple on the surface but full of fine attention to nuances of tone color, pitch and expression.

The title came later, as they often do for me. Naming the piece for the starry hunter who dominates the winter sky feels appropriate to me on several levels. With their prismatic twinklings, their whispers and their vast, lonely reverberations, the outer sections of Orion seem to evoke the night sky in its beauty and mystery. The middle section, more earthbound, is full of animal vigor and power, like the hunter for whom the constellation is named; he seems to coalesce out of the sparkling particles of the universe and then dissolve back into them.

David Vayo teaches composition, improvisation and contemporary music at Illinois Wesleyan University, where he also is Coordinator of New Music Activities. He studied at The University of Michigan and Indiana University. Vayo has received awards from the John Simon Guggenheim Memorial Foundation, ASCAP, and the Koussevitzky Music Foundations, among others. Over four hundred performances of his compositions have taken place, including at the International Trombone Festival, the Grand Teton Music Festival, the Thailand Composition Festival, and three World Music Days of the International Society for Contemporary Music. Vayo is also active as a pianist performing contemporary music, jazz and free improvisations.

This work was written during the fall of 2013. It is built around two hexachords (GABCDE and DbEbFGbAb), which, when combined, comprise all twelve pitches. Both harmonies and melodies are derived from these hexachords, intended, by the way, as a nod to Guido of Arezzo, though incorporating contemporary applications to his basic scalar concept. In this work, each of the six instruments has a solo made from various 12-tone combinations of the notes in the hexachords. The result is a combination of tonal and 12-tone music that is intended to be accessible (possibly enjoyable) to most listeners.

Alan Schmitz is Professor of Theory/Composition and Associate Director of Undergraduate Music Programs at the School of Music, University of Northern Iowa. He received bachelor and master of music degrees from the University of New Mexico and the Ph.D. in music theory and composition from Rutgers University. Schmitz's music has been performed in the United States, Western Europe, Romania, and Russia. He has received awards, commissions, and grants for composition from several agencies including the Alaska Council of the Arts, the Iowa Arts Council, and the Lila Wallace/Readers Digest Foundation. Two CDs of his music have been released on the Capstone/PARMA labels.

Generator - Generators of all types are built to produce something. Whether it is heat, gas, electricity, or even signal generators, they are all types of machines that create a product. Generator creates a type of musical energy through the means of a consistent flow of two musical ideas. The opening of the piece is focused on quartal harmonies combined with an ostinato figure that work together and against each other to create a type of musical energy that rises and falls. A contrasting energy section follows the opening. Contrapuntal ideas between each voice create a flux of energy that also rises and falls through dense and sparse textures.

Zack Zubow's compositions have been featured on numerous new music conferences and festivals throughout the United States, Europe, and Asia. He has won awards from the College Music Society, named the Region IV winner of the SCI/ASCAP Student National Composition Competition, and was the first place winner of the Five College New Music Festival Student Composition Competition. Zubow's string quartet, Sundown, was included in the most recent publication of the SCI Journal of Music Scores Volume No. 49. Zubow completed his PhD in music composition from The University of Iowa in May of 2012 and currently teaches music theory and composition at Coe and Cornell Colleges. For more information please visit www.Zackzubow.com.

Imagine watching a film with no sound. Imagine composing music to accompany this film. Imagine that the music attempts to represent, in some way, the visual elements contained in the film. You have now imagined a particular kind of music that shares a syntactic relationship with the film. Now imagine composing the same kind of music just described but with no film. Repeat three times. You have now imagined Four Short Scenes.

Brooke Joyce's music has been described as "vividly pictorial" (San Francisco Chronicle) and "exceptionally gripping" (Los Angeles Times) and has been performed by soloists and ensembles around the world, including the Cincinnati Symphony, the Brentano Quartet, and the Nash Ensemble. In addition to his concert music, Brooke collaborated on several musical theater works with playwright Frederick Gaines, including An Imaginary Line, based on the book Into the Wild by Jon Krakauer. Brooke serves as composer-in-residence at Luther College in Decorah, and is a faculty member of the International Music Festival of the Adriatic.