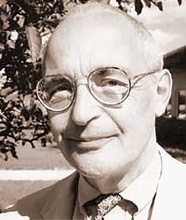 A tribute to the life and works of
D. Martin Jenni

A formative teacher of composition, I met Humphrey Searle during his one-quarter residence at Stanford in 1964, my first year. I took his Webern course (running commentary on his not-yet published translation of a composerly biography). My Inventio super nomen naturally caught his eye: his name as soggetto cavato, Webernesque microserializing, a decadent Viennese waltz-abstraction, and inspired in part by the performance (in which I played contrabass) of his Fifth Symphony. I reproduced its marvelous percussion "glissando" cadenza. I made several visits to his & Fiona's multi-storey house in St John's Wood; a regular pilgrimage whenever I was in London.

Composed for a memorial to HS at Southwark Cathedral and performed by Kate Lukas and myself, the work uses (exclusively) the 6-note series [B, C, E, F, D, Eb] constructed for Inventio super nomen. Dated Cornwall, 14 May 1982, shortly upon learning of Searle's death in London.

I composed the duet in Chicago, during my DePaul tenure, for Kate Lukas and myself. Manuscript evidence shows an initial "take" in ink, with subsequent developmental expansions. A very intimate sense of chamber music, as also the earlier piece with harpsichord. Musique printaniere was later included in a Composers Recordings Inc. LP.

Text by Iowa City poet Pauline Aspel, set to song for a performance at a summer Interlochen concert. (Aspel provided an English version as well, but I have lost it.) Rhapsodic response to Aspel's "vos musiques."

Written for 4 timpani and 3 bongos (high, medium, low) and composed at Canton, NY (13-15 March 1968) presumably during a visit to Richard Saylor (graduate co-pain, with wife Naomi, at Stanford. His first position out was at St Lawrence University in Canton, NY, which led to the creation of Axis). The work was written for Gary Chaffee, and arose from my interest in exploring the expressive possibilities (both awesome and introspective) of the medium, as well as subtleties of pitch and gesture.

Composed from MacDowell sketches from 1981 (v. Figura circulorum). Largely sustained harmonic monody, but with the emergence (and disapperance) of a second voice-persona. Recurrent periods interspersed with variations. In its singlemindedness, it is related to The Opalion, Figura c., Ballfall, Musica dell'autunno etc. (G, a major arrival note, is also a friend's initial.)

Tio = Ti[m] O[Dell], who asked for the piece and arranged for Augustana College to "commission" it. Brief, playful, and nearly monothematic (Lydian diatessaron).

This irrepressibly gleeful conceals metrical games and anagrams (explained in the inner cover). The matrical lay-out (without pitch) was done chiefly in Switzerland at year end of 1984; musical realization took place in Iowa City, about a month into the spring semester of 1985. Theme V. is based on a repetitive set I concocted at a very early age (standing at an upright piano); after a dormancy of four decades, the idea found a home! It is the affective peak of the piece, utterly joyous fun. Theme VI. was consciously inspired by marimba music that accompanied the Hartz Mountain Canaries radio broadcasts of my youth; this is immensely playful music, a kind of music theatre in its performance.

Requested by a graduate percussionist at Iowa, David Colton; before several times at Iowa and, again through Colton, at Rice. The inner cover of the score bears this note:

The work bears the subtitle William H. in memoriam. It was first performed the in spring following Bill Hibbard's death. A meter-driven composition (the measure being two beats, each subdivided into 5 eights), Per Elysios (through the Elysian Fields) is loosely modelled on Couperin's Les Gondoles de Delos, i.e. a rondeau with independent couplet-episode. The whole is obsessed with the soggetto cavato b-h [b-flat, b-natural]. The farthest-out couplet cites R-Music Asphodel (the first work I wrote for Hibbard's CNM); the work ends in a 10-m. citation of the conclusion of Get Hence Foule Griefe (1975) which, quite remarkably, is a mini-series of variations on a b-flat, b-natural cadence.

The dedication reads: "In joyful memory of my father (1897-1971) and for the occasion of the dedication of the organ in Messiah Lutheran Church, Santa Cruz, California."

Exuberant, wild (quasi-Messiaenish) music, this work was to have been played by the organist of Grace Cathedral, San Francisco, but as (he claimed) the manuscript got to him too late, I was obliged to play it myself (somewhat under tempo).

Albinas Prizgintas adds, "Curiously, the Verbum Supernum is located in the middle of the thick old Liber Usualis - almost slide rule perfectly centered. Not that Martin would stoop to such games of chance...or would he? When I first read through the piece I thought, "aha, another Messiaen clone." Messiaen's influence makes itself known in much of all organ music since his time. But Martin's piece is a work quite apart. It's modular. Parts are moved around like furniture. Call it a kind of serialization, if you will; as was Messiaen's also. But it is more influence by modern jazz harmony. The rhythms, perhaps also owing a glance back to Messiaen, have much more spirited dance to them, particularly in the pedal, and in the constantly changing meters. The piece has a satisfying unity of sound. It is a modern piece of organ music influenced by the jazz scene in Chicago that Martin must have known something about, and, also, the influence of Leo Sowerby, who Martin was quick to point out having heard him play."

The work fulfills an NEA grant awarded in 1980 or 81. I had hoped to have finished the work at the MacDowell Colony that winter but made little headway beyond generating sketch collections (later used in The Opalion and Canto). The title and the figure of circles itself--fig.3 in the Musica speculativa of Jehan de Muris (c.1325)--came to hand through close doctoral advising of the editing of that work by Susan Fast. Jehan taught Boethian mathematics (a form of music) at the Sorbonne. Especially fascinating to me was his concept of chaos as a positive container of all musical sonorities and relationships. (It might be thought of as "The De Muris Codex!") The title names a figure found early on in the treatise, with the annotation:

This figure of the perfect consonances of music virtually contains all the harmonies and principles of music. Were these to be unbound and brought forth, they would make known nearly the whole of music. Thus it is reasonable enough to call the figure a kind of chaos in which many forms are hidden.

The nonce-ensemble includes the 7 Tibetan singing bowls acquired by me (some with Kathryn Lukas) in 1990 in Nepal (Kathmandu Valley Tibetan settlement) and later in Bloomington IN, and 2 dingsha (finger cymbals); as well as the tanpura I purchased on a 1992 visit to Chennai. The bass quartet nods to R-Music and Eulalia's Rounds, the 12 violin writing to Canticum B.V.

The notion of the work is a kind of medieval clock, tallying years rather than hours. (The tallying occurs in the metallophones.) The clockwork mechanism is the representation of Oct. 4 from anno 1937 and into the 21st c. [m.177] and the age of the composer in each year, terminating at 73 (as the reverse of '37). The scheme for the 20th c. is an exploration in the violins of the complex sonorities of the singing bowls; the shift into the 21st can be heard when the sonorities exchange date-keeping functions, the tanpura and harpsichord enter, and the violin scheme shifts ultimately into a series of 12 solo violin phrases. The score bears the completion date of 31 January 1993, commemorating the day of the funeral of my distinguished Iowa colleague, Kenneth Gaburo.