This program was conceived for the contemporary music series AVANCE in Mainz, Germany. The idea was to have the American composer David Gompper and the German composer Bernd Thewes write a piece using the preparations of Cage's Sonatas & Interludes. 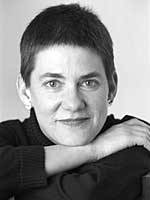 Patricia von Blumröder, born in Oakland, California, Patricia studied piano at the University of Idaho, the University of Iowa and the Staatliche Hochschule für Musik in Freiburg, Germany. Concerts, radio broadcasts and television appearances in Europe and America have given her a reputation as an artist who does not confine herself to the traditional piano literature, but has a keen interest in the new music of the twentieth and twenty-first century. Her contemporary repertoire ranges from the piano music of the New Viennese School (Arnold Schoenberg, Anton Webern, Alban Berg) by way of the French modernists (Claude Debussy, Olivier Messiaen) to the key works in the post-war serial and experimental music (Karlheinz Stockhausen, Pierre Boulez, Luciano Berio, John Cage). She has been acclaimed in performances of Stockhausen's KLAVIERSTÜCKE, Messiaen's Catalogue d'oiseaux, the piano works of Boulez, and Cage's Sonatas and Interludes; she has performed these and other compositions as a guest artist at music festivals in Paris, Lille, Leipzig, Hamburg, Salzburg, Fribourg and Zagreb, at the Alte Oper in Frankfurt am Main and at the Berliner Festwochen.

Sonatas and Interludes (1946-48) is considered Cage's first mature composition. The idea of a prepared piano filled with nuts, bolts, screws, rubber mutes and weather-stripping comes as much from Cowell's tinkering 15 years earlier (Aeolian Harp, for instance) as it does from Cage's engagement with percussion ensembles beginning in 1937. Indeed, it was the practical limitations of the stage at the Cornish School that forced Cage, an accomplished pianist, to consider the piano as his personal percussion ensemble (Bacchanale). And while many writers acknowledge the possible portrayal of the eight "permanent emotions" of Indian aesthetics (the erotic, heroic, odious, anger, mirth, fear, sorrow and the wondrous -- and their common tendency towards tranquillity), there is nothing in the score to suggest such a direct reference--although in a review of the 1949 Carnegie Hall performance, Cage says that the emphasis on ten-bar phrases in the last four sonatas represents tranquillity.

Sonatas I-VII and XII through XVI are binary forms, with each section repeating (AABB rhythmic structures) but using various proportions. The first two interludes have no structural repetitions, and the last two interludes, as well as Sonatas IX, X and XI each contain a prelude, interlude and postlude.

John Cage (1912-1992) American composer, philosopher and writer on music, was a leading figure of the post-war avant garde. His ideas and innovations are echoed today in many contemporary works, both American and European. Cage studied with Schoenberg in 1934. By 1938 he was an accompanist and teacher at the Cornish School of the Arts in Seattle, where he first met dancer Merce Cunningham. But it was after 1949 that he began to develop his famous aesthetic of silence (thanks to Feldman's influence), and only after the late 1950s that chance operations affected Cage's compositional approach to silence. While Cage is most famously known for his 4' 33", he continued to explore sounds in many of his later works--often unintended, to be 'free of individual taste and memory.' Cage's fame became firmly established thanks to a series of performances and recordings abroad, publication of his music but especially his book Silence: Lectures and Writings. This collection helped launch him into a composer of international renown. Many young composers in the 1960s were taken by his music, so much so that echoes of his aesthetic continue to resonant in current European compositions today, especially those still writing in the high modernist style. 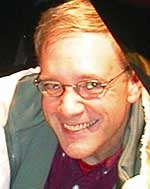 This short work was written for the same preparation found in John Cage's Sonatas and Interludes. Much of the material is generated from two sources: five letters (C, A, G, E and D) representing five pitches and the idea of existing outside or inside a cage, with six different pathways through such an object using the corners as entrance points. The sounds of the piano fall into three categories: dry (drums), semi-dry (drums with sustained quality) and sustained (gamelan bells). I mapped those sets of timbres onto three imaginary placements: looking into the cage (sustained yielding to semi-dry), circular movement inside the cage (dry), and looking outward (semi-dry yielding to sustained). This composition is dedicated to Patricia von Blumröder, who premiered it in Mainz, Germany on November 22, 2005.

David Gompper (b. 1954) has lived and worked professionally as a pianist, a conductor, and a composer in New York, San Diego, London, Nigeria, Michigan, and Texas. Since 1991 he has been Professor of Composition and Director of the Center for New Music at the University of Iowa. In 2002-2003 Gompper lived in Russia as a Fulbright Scholar, teaching, performing and conducting at the Moscow Conservatory. This fall he is also teaching composition as an adjunct at the University of Minnesota. In October 2004, Albany Records released a CD entitled Finnegan's Wake with performances of works for violin and piano by Gompper and Viennese violinist Wolfgang Dávid. They recorded a second album last September which included works by Debussy, Messiaen and Bartok, among others. Visit davidgompper.com for more information.

Richochet for piano, with the preparation found in John Cage's Sonatas and Interludes (2005)

Cage's invention of preparing a piano was often the subject of various speculations. For me, such alteration is an act of disintegration. The piano is considered the principle instrument that represents western tonality and, more importantly, enabled to handle the system. The tempered tuning system is represented as an analogue not only in the way the strings but the keys are positioned. By preparing a piano, Cage influenced and changed that system:

... mutes of various materials are placed between the strings of keys used, thus effecting transformations of the piano sounds with respect to all of their characteristics.

I view the term transformations as actually being deformations. The piano as a single instrument with unified sounds has now been turned into an instrument with different specific sounds, like a percussionist who assembles a setup from a wide array of instruments. Just as you find in the tonal system and its analogue in the position of the keys, this structure is even mirrored by playing the keys of the piano. I imagine performing on the piano is similar to a ballet of fingers, hands, arms, body and feet. If someone, for instance, watches the piano-playing sequence of a silent movie, he is able to imagine the sound because higher sounds are to the right, lower to the left. In my piano work Richochet, I use all 88 keys, not just the 45 which are prepared by Cage. So the musical figures, in the sense of a ballet, superimpose the individuality of the prepared sounds. In order to perceive this phenomenon better, I used a simple musical theme that was deduced from the bouncing (ricochet) of a pingpong ball against the strings. I worked up this theme using the principles of classical counterpoint (i.e. augmentation, diminuation but not retrograde because the ricochet-figure would loose its unique gesture). Expressed in the subtitle, I would describe my piano piece as a musical object that resides in the conflict of gesture and figuration. 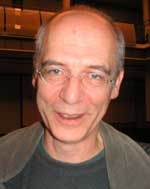 Bernd Thewes (b. 1957 in Saarbrücken, Germany) started playing the piano at age 15. He studied music in Saarbrücken and Musicology in Mainz (MA degree). As a composer, he considers himself an autodidact. He was the organizer of a series of new music concerts (Illinger Burgfestes fuer Neue Musik) from 1988-1997, and together with Michael Gross produced radio broadcasts at four German radio stations: SR, SWR, HR and BR. He has written numerous chamber and orchestral works, as well as diverse fields involving sound installations, electronic and film music, an opera and building new instruments. A CD of his music is available from Acapulco Records. Thewes lives as a free-lance composer in Mainz. Visit www.bernd-thewes.net for more information.