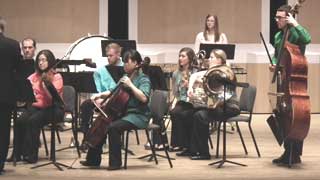 The Center wishes to thank Professor Lawrence Fritts for the EMS equipment used in tonight's concert, and to the following students who assisted in the long process and effort to ensure a successful performance: Zach Zubow, Will Huff, Dan Frantz, Shane Hoose, Nima Hamidi and Leo Iogansen.

for flute and electronics has a very simple idea: one single arch. Beginning with the flute sound, gradually a transformation towards noisy and distorted textures is achieved supported by the electronics. Then gradually the music finds it's way back to the pure flute sound. The treatments of the electronics start very subtle by using delays. Gradually this delay distorts the sound by delaying different parts of the spectrum differently until the original sound is barely recognizable. This forms the backbone for the realization of the electronics in Inner Friction. Some other layers have been added, but overall, the music is characterized by mostly subtle and detailed events, both in the flute and in the electronics.

was commissioned by the Spectra Ensemble in Gent (Belgium), and first performed in March 2008. While the title refers to the Spectra Ensemble, the harmonies are also derived from spectra. However these are 'fictional' spectra: the spectra are distorted or hybrids, a combination of multiple spectra. More importantly, the duration and timing of the spectra create another dimension upon which the form of the composition is built. This idea: that the form is not only supported, but also directed by the underlying harmonies is an important characteristic of this composition. Of course, many other parameters contribute to the form in various ways, and all together is creates a rich variety in the musical textures.

Spectra is dedicated to Filip Rathé, the conductor of the Spectra Ensemble.

Bert Van Herck is Visiting Assistant Professor at the University of Iowa. He holds a PhD from Harvard University where he studied with Magnus Lindberg, Julian Anderson, Chaya Czernowin, Brian Ferneyhough, and Helmut Lachenmann. With Hans Tutschku, he studied electroacoustic music. In the fall of 2006 he was an exchange scholar at Columbia University, working with Tristan Murail.

His compositional interests include large ensemble and orchestra, electro-acoustic, and microtonal tunings. Recent performances include Sept Chansons and Spectra at the ISCM World New Music Days, Formes Fluides at the Huygens-Fokker Foundation for microtonal organ, and Inner Friction for flute and electronics at the EMM Festival by flutist Rebecca Ashe.

Flutist Rebecca Ashe is currently on the faculty of the University of Missouri-Kansas City, as Adjunct Instructor of Flute at the Community Music and Dance Academy. She is also a freelance musician and appears across the country as a performer, lecturer, and masterclass clinician. A new music performer and collaborator, she has partnered with several composers and has performed at several festivals, including SPARK, SEAMUS and the Electroacoustic Juke Joint.

Dr. Ashe earned her Bachelor degree in Applied Music (flute) at the Eastman School of Music, where her principal teacher was Bonita Boyd. She earned both Master of Musical Arts and Doctor of Musical Arts degrees from the University of Missouri -Kansas City, studying with Dr. Mary Posses. In 1998, she was the only American and one of four flutists worldwide to be chosen for Trevor Wye's prestigious one-year course in Kent, England. Other major teachers have included William Bennett and Karl Kraber.

In 2007, Dr. Ashe collaborated with three composers, Christopher Biggs, Ryan Oldham, and Jorge Sosa to premiere three new pieces for flute. A recording project for the pieces is underway, with a release expected in 2010.

Dr. Ashe has performed recitals throughout the United States, Canada, England, and Latvia. In 2003, Dr. Ashe and pianist, Inara Zandmane, gave a recital at the Academy of Music in Riga, Latvia. Ms. Ashe was the first American flutist to perform a recital at the Academy, which was broadcast on national radio. She also gave a master class at the E. Darzins Academy of Music, the most prestigious preparatory music school in Latvia. Along with her recent collaborations, Dr. Ashe has premiered several pieces, including the Kansas City premier of Chen Yi's The Golden Flute, for flute and orchestra, in 2003, and Hsueh-Yung Shen's …And Then Things Changed, for flute and piano. She has won several local and national grants and awards.

is a dialogue between the solo oboe and subtle electroacoustic treatments. Each of the three sections of the piece explores different relationships between the instrument and the electronics. The work was commissioned by Ecole Nationale de Music du Pays de Montbéliard (France) and first performed during the festival "Nuie bleue" Besançon (France) by Christian Schmitt.

A universe of sound is surrounding us "from within". It is composed of our dreams, fears and longings. It only exists within our body, our own imagination. We want to share it - but there are no words, no possible descriptions. We are sitting on a meadow on a warm night - alone; watching the stars.

Nobody is disturbing our thoughts. Nobody is limiting our space. We don't have to rush anywhere; we have time to let go and to follow these sounding creatures...

It's not a nightmare - it's just the interplay of our imaginations.

In May 2003 he completed a doctorate (PhD) with Professor Jonty Harrison at the University of Birmingham. During the spring term 2003 he was the "Edgar Varèse Gast Professor" at the TU Berlin. Since September 2004 Tutschku has been Professor of Composition and Director of the electroacoustic studios at Harvard University. He is the winner of many international composition competitions, among other: Bourges, CIMESP Sao Paulo, Hanns Eisler price, Prix Ars Electronica, Prix Noroit and Prix Musica Nova. In 2005 he received the culture prize of the city of Weimar.

"Talea," in Latin, means cutting. In medieval music this term designates a reiterated rhythmic pattern to which a configuration of pitches called "color," likewise reiterated and coinciding or not with the first, is grafted. In the twentieth century we have rediscovered this dissociation between pitches and durations. The idea of a "cutting" of the initial idea, of putting the various rhythmic structures in phase and out of phase, as well of a structure in two parts in which the second could easily be termed "color", have suggested the title of this quintet to me.

In Talea, I tackle two aspects of musical discourse from which my research on instrumental synthesis, on micro-phonics and on contiguous transformations had estranged me, that is, speed and contrast. Talea consists of two parts linked together without interruption that express two aspects or, more precisely, two auditory angles of a single phenomenon. Thus this single gesture (fast, fortissimo, ascending - slow, pianissimo, descending) is presented in the first part by durations of medium length and gradually eroded to the point of leveling off the contrasts. In the second part, it expresses the overall form and the succession of sequences. It is polyphonic in the first part and homophonic in the second.

From the perceptual point of view, the first part seems to me like an inexorable process, a veritable machine for forging the freedom, which will emerge in the second part. The course of the latter is in fact pierced by more or less irrational emergences, kinds of recollections from the first part, which gradually assume the color of the new context until they become unrecognizable. These wild flowers, these rank weeds pushing up in the interstices of the machine, grow in importance and then overflow until they give the sections unto which they have wormed their way like parasites an entirely unexpected coloration.

Upon completing his studies at the Paris Conservatory in 1972, having studied with composers Olivier Messiaen and Henri Dutilleux, Gérard Grisey (1946-1998) won the coveted Prix de Rome and founded, with fellow composers Tristan Murail, Michaël Lévinas, Hugues Dufourt, and Roger Tessier, a contemporary music ensemble known as l'Itinéraire. This ensemble, and the composers associated with it, became the driving force behind the establishment of an attitude towards composition that has come to be known as spectral music.

Any vibration, according to the work of French mathematician and physicist Joseph Fourier, may be analyzed as the interaction of a number of individual sinusoidal frequencies. In music, this property is evident in the phenomenon of overtones or partials that combine in particular ways to create a sense of timbre. Groups of overtones and their relationships (specifically their relative frequencies and intensities) are known as spectra, and translating these spectra into musical sonorities provides composers with tools for the isolation and manipulation of timbre as the basis for the interaction of musical forces. Spectral composers use these "spectra" along with the refined capabilities of sonic analysis available through modern technology to construct compositional models that are founded on the innate properties of sound.

Due primarily to the use of spectra as compositional models, the term "spectral" has come to be the standard label associated with this music. However, most of its founders have abandoned this term as an overly reductive characterization of a broad aesthetic preoccupation with exploring how the innate properties of sound may be translated into musical processes. Grisey was often at the forefront of this opposition, proposing instead the term "liminal" as a more appropriate label for this attitude towards composition.

Liminality, in the sense of the threshold between two perceptual phenomena, can be seen on every level of a spectral composition. Through its mimetic nature, spectral music in general, and the music of Gerard Grisey in particular, explores the regions between the conception and perception of one-dimensional timbre and multi-dimensional harmony, exact frequency and approximate pitch, precise duration and rhythmic subdivision, and the gradual evolution of musical processes and the precise articulation of musical form.

In order to refine and develop his particular attitude towards composition, Grisey pursued studies in acoustics with Emile Leipp at the Paris VI University in 1974 and further training in acoustic research at IRCAM in 1980. In 1982, Grisey accepted a position at the University of California, Berkeley as a professor of music theory and composition. In 1986, he left Berkeley to teach composition at the Paris Conservatory, a post he held until his death on November 11th, 1998 at the age of 52.  — Christopher Gainey