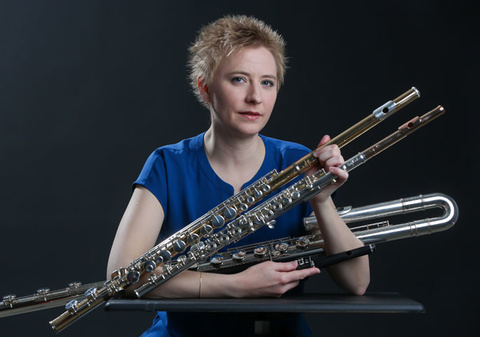 Flames Must Not Encircle Sides (1980)

for flute and tape

for alto or bass flute and electronics 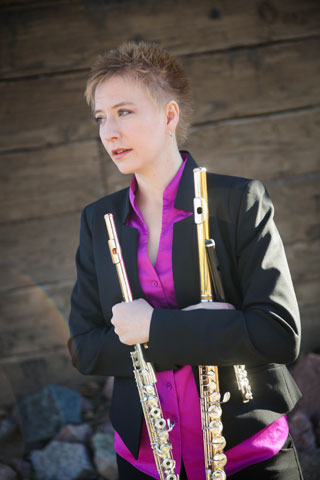 Lisa Bost Dr. Lisa Bost-Sandberg is a flutist, composer, and improviser deeply committed to contemporary music as well as its rich roots in the classical repertoire. In demand as a soloist and chamber musician, she has performed across the United States and Europe, including National Flute Association conventions, new music festivals (SEAMUS, EMM, Pixilerations, Spark, and SCI), and guest appearances at universities. She is the flutist of the InterSpheres Trio, which toured Hungary in 2014, and served as principal flute of the Bismarck-Mandan Symphony Orchestra from 2013-2017. She has recorded on the Albany, GIA, and North Texas Jazz labels. Currently serving the National Flute Association as chair of New Music Advisory Committee, on November 1st she will begin a term on the Board of Directors.
A dynamic and impactful teacher, Bost-Sandberg has taught masterclasses, presented lecture-recitals, and led workshops at numerous institutions. She is the Instructor of Flute at the University of North Dakota and teaches at the International Music Camp. She has also served on the faculties of the University of Mary, the University of North Texas, the University of Texas at Dallas, Clarke College, and the Great Neck Arts Center.
Her compositions have been selected for performance at conferences of the World Saxophone Congress, North American Saxophone Alliance, National Flute Association, Society of Composers Inc., and Iowa Composers Forum. Glint for solo tenor trombone was selected as the winner of the 2016 American Trombone Workshop Composition Competition. Her most recent project, titled Chroma, is a series of eight movements of diverse instrumentations paired with paintings by artist and commissioner Marjorie Schlossman. Premiered at the Plains Art Museum in Fargo, North Dakota, in May of 2018, the collaboration with Schlossman is the subject of a short film (forthcoming) by Mary Trunk and Caren McCaleb.
A Montana native, Bost-Sandberg received her doctorate in flute performance with a related field in composition from the University of North Texas as a recipient of the prestigious Masters and Doctoral Fellowship. She is also a graduate of New York University (Master of Arts) and The University of Iowa (Bachelor of Music). Her primary flute instructors include Terri Sundberg, Elizabeth McNutt, Robert Dick, Tadeu Coelho, and Tamara Thweatt. Bost-Sandberg’s primary composition instructors include Andrew May, Christopher Trebue Moore, Robert Dick, and Lawrence Fritts. She studied the Alexander Technique with Käthe Jarka of New York City and Pedro de Alcantara of Paris, France.
www.lisabost.com

Flames Must Not Encircle Sides

Flames Must Not Encircle Sides is a solo piece that spectacularly combines multiphonics and circular breathing. In a setting of continuous multiple trills, the flutist creates illusions as to how many players there are, and where “they” are in the room. This piece was the only American composition on the repertoire list for the 1990 Munich International Competition. – Robert Dick

Snowblink was commissioned by Loren Been, who performed the world premiere on her senior recital at the University of Kentucky. Due to Loren’s interest in the pedagogy of contemporary flute music, she requested a solo work that utilized various extended techniques (percussive sonorities, multiphonics, timbral variations, etc.) and featured other new music conventions. A “snowblink” is a white reflection or glare in the sky that appears over a snowfield.

Fluxion was written for and premiered at PKN Productions' UnTapped @ the Tank 2008 Concert Series in New York City. The title refers to the state of the melodic and timbral materials used in the piece. During my time in New York I was surrounded by an incredible amount of sonic experimentation by my colleagues and instructors, and this piece is very much inspired by my collaborations with these people and by the percussive timbres that the flute is capable of producing.

December was written in December of 2011, and Sollberger describes it as “a circular, ‘decentered’ composition.” Composed in four main sections, it can be performed either Continuously or Discontinuously. If presented Continuously, the performer can choose from four different orderings of the sections—ABCD, BCDA, CDAB, or DABC—and they are performed without pause. If presented Discontinuously, the sections are performed as separate movements and can be performed in any order. Mondo liso is a play on “Mona Lisa” and means “threadbare world” in Italian—reflective of how Iowa, where Sollberger lives, looks in December without snow. Pas de deux is about the (sharp!) contrast between karate and ballet. Night Forest is a kind of nocturne or nocturnal evocation. Fragile Shapes/Liminal Song is about fragile gestures cohering gradually into what might be called “song.”

In the musical as well as visual arts, the relation between concept, process, and object raises fundamental question that must be newly addressed in each work. These questions are as intriguing today as ever: which comes first, concept or process? is the concept the object? does the process determine the object or does the object imply its own means of generation? Artistic responses to such questions are naturally influenced by the medium. In Life-Drawing, the compositional process originated with the physical sound of the flute. The instrument was digitally analyzed and various sonic features were extracted and compositionally manipulated. Among the most important transformations was one that mapped the flute's partials from a linear space to a curved space, creating a symmetrical, sometimes Impressionistic harmony. Another important transformation was one which applied mathematical curvilinear functions to the iterations of key clicks, giving the work a flowing, almost hand-drawn temporal quality. As it interacts with the tape part, the live flute draws from the computer-realized material, creating a sound universe which acts to unify concept, process, and object. – Lawrence Fritts

Der Ohrenzeuge ("The Earwitness") is the sixth in a series of short works for solo instrument based upon characters in Der Ohrenzeuge: Fünfzig Charaktere ("Earwitness: Fifty Characters"), written in 1974 by the Bulgarian-born British-Austrian novelist Elias Canetti (1905-1994). Canetti’s distinctive studies incorporate poetic imagery, singular insights, and unabashed wordplay to create fifty ironic paradigms of human behavior. This collection of works, begun in 1997, was inspired by the vividly surreal depictions of Canetti’s characters and includes works for contrabass, violin, bass flute, ocarina, contrabassoon, glass harmonica, trumpet, percussion, bass saxophone, piccolo, organ, basset horn, and violoncello, among others. In Canetti's depiction of this character, The Earwitness “comes, halts, huddles unnoticed in a corner, peers into a book or display, hears whatever is to be heard, and moves away untouched and absent.” Accordingly, the work itself quotes fragments of nearly two dozen twentieth-century works from the flute and bass flute repertoire. – Joseph Klein

I Will Not Be Sad in This World

Rubha Hunish (pronounced “rue’ah hoon’ish”) is a location on the tip of the Isle of Skye in Scotland. This music is inspired by the Gaelic folk music native to the region. The first half of the piece is a stylized strathspey, which attempts to capture both a sense of lyricism and the snappy rhythms associated with the dance; the second half is a jig. Rubha Hunish was commissioned by Lisa Bost, and is dedicated to John White and Anne Martin. – Brooke Joyce