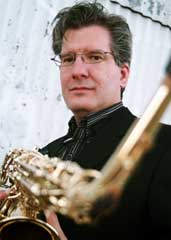 a leading interpreter of contemporary music for saxophone

Randall Hall is a leading interpreter of contemporary music for saxophone. His performances of new music range from the contemplative to the ferocious, and feature his mastery of experimental playing techniques, cutting edge electronics and white-hot improvisations. Innova Recordings describes his music as "high-octane, supercharged sax" and The Wire says his music has "fire and teeth". In addition to his solo concerts Hall performs in the contemporary improvisation duo Pendulum and is also a distinguished performer of traditional concert music.

This collection of etudes demonstrates the musical potential of the simultaneous production of multiple pitches on woodwind instruments. This effect can be used alone or in combination with other techniques such as multiphonic trills, microtones and slap tongue. At times multiphonics are brutal, other times ethereal. Etudes 21 and 24 respectively focus on legato and staccato multiphonics lines. The close of the first half of the concert returns to the Etudes. The introspective Etude 20 uses subtle harmonics within the multiphonics, while Etude 22 is much more rhythmic and exploits multiphonics combined with slap tongue.

the further in the nearer the actual thing

is inspired by the thirteenth century German mystic Meister Eckhart. In his eleventh sermon he states, "To find nature herself all her likenesses have to be shattered and the further in the nearer the actual thing." This is a cryptic reference to the idea that the physical manifestation of a thing does not represent its essential quality, and focus on the material image can actually obscure true knowledge of what is beheld; thus the outer image must be transcended to reveal the inner image. The piece has two parts; the first consists of electronic manipulation of a recording of this quotation form Meister Eckhart, while the second features the electronic manipulation of the saxophone.

transliterated as "ite bakkhai" means "onward Bacchae". The Bacchae (or bacchants) are followers of Dionysus, the Greek the god of wine who induced wild rites, including crazed orgiastic excesses and even cannibalism, reaching back to a dark, archaic level of humanity. Reflecting on these mysteries, the scholar of comparative religion Mircea Eliade, wrote, "Whence the attraction, this mystery: to eat raw flesh of the pursued animal, trapped and torn apart with the nails? Isn't it probably a regression to a very archaic stage, perhaps even prehuman? The wild stage? This unfathomable fall into the world of animals of prey can constitute a spiritual and physical shock that is extremely creative. A feeling of freedom; you feel that you are no longer a man, no longer subject to laws, to prohibitions. There is even more: you relive a primordial stage, you rediscover a world that has thought to be lost, you are immersed in the time of purely zoological existence, a time thought to have been abolished. The Dionysiac ecstasies: to rediscover the time from before the world, when time was only presence without beginning or end…" (No Souviniers, 92-93).

The piece is built around a passage from Euripides' play, The Bacchae, read in the original Greek by Augustana College classicist Mischa Hooker. The selection describes the return of Dionysus to the city of Thebes accompanied by new converts to his cult from Asia. The opening presents the text as a sort of invocation, the gathering of some imagined ritual. The piece builds intensity as the bacchants withdraw from profane time and enter into mythic time, gathering energy and become increasingly frenetic.

In part 2, I return to ιτε βακχαι as a postlude to HARD and the conclusion of the rite.

My long time friend and collaborator, Jonathon Kirk's Kirk teaches at North Central College and performs with me in the free improvisation ensemble Pendulum. The saxophone part of Riddled Ladder is a fully composed piece derived from our work in that ensemble. The accompanying computer part is generated in real time from the electronic manipulation of the saxophone material. About the title the composer writes, "Essentially, the 'ladder' reference is all about the scale...the word scale coming from the original meaning ladder. Think of the never-ending staircases in the Borges story, 'The Library of Babel.'"

Francoise Rossé wrote Le Frêne Égaré in 1978-79 while he was a student of Messiaen. The title translates to the lost or displaced (even distraught) ash tree, a reference to the ash tree in Norse mythology depicted in Wagner's Ring cycle; the tree from which Wotan made his spear and where he gave up his eye to gain the secret knowledge of the ruins. This is the World Tree or axis munde, the center of the world where the physical and spiritual spheres intersect, now damaged by Wotan's actions. The great saxophonist Jean-Marie Londeix calls Le Frêne Égaré "an extremely important work, not only because of its modernity but also because of the fact that this modernity led to the discovery of many of the saxophone's extraordinary idiomatic possibilities. This challenging work demonstrates how appealing the saxophone can be to an imaginative, demanding, yet open-minded composer. It also shows that without a doubt the saxophone can stand alone." The music makes use of a variety of sonorities including blowing air, breathy tone, barely audible dynamics, multiphonics and rapid passage work (which Londeix describes as "reptilian") taking us into a sound world that passes the boundaries of traditional distinctions between musical sound and noise. The focus on the alternation between air and tone gives the effect that the piece is a living-breathing creature.

Ed Martin is an award winning composer of instrumental and electro-acoustic music. His pieces have been performed in Asia, Europe, South America and throughout the United States. He currently teaches at the University of Wisconsin in Oshkosh. "The title Apparitions" Martin writes, "refers to the reoccurring saxophone sound that appears in various forms throughout the accompaniment. These sounds are introduced as long delicate tones that emerge from the soloist's line. Further along in the piece, they appear as short melodic phrases that subtly taunt the soloist. These 'ghost saxophones' become increasingly agitated and torment the soloist as the piece builds to its climax. Eventually the soloist is overcome by the accompanying texture of ferocious saxophones."

The preceding work moves directly into Victoria for solo tenor saxophone, by Taiwanese composer Yiu-kwong Chung. Victoria begins with the vocalization of utters phonetic texts set against the percussive use of the saxophone. The developmental process of Victoria continues with forceful melodic patterns and brilliant rhythmic passages, balanced by short lamenting expressive transitions.

In this performance, I have used Part 1 of ιτε βακχαι as a prelude leading directly into HARD by French composer Christian Lauba. This raucous solo is an anthem of contemporary music for saxophone, taking advantage of the instrument's full palette of extended techniques: multiphonics, slap-tongue, tone-color trills, vibrato manipulation, flutter-tongue and key clicks. The composer describes the piece as a "synthesis between the present contemporary music and the more popular music (Hard rock, Soul music) which is often improvised. These musics have many aspects in common in spite of the barriers that apparently separate these essential means of expression. The piece is very precisely written but it must give the impression that it is a long improvisation. Both performer and audience must go into a trace at the end of the performance." The piece achieves Dionysian extremes on its own, but embedded within an imagine ritual it becomes the revelation of Dionysus himself, the god who represents the overwhelming even destructive forces of life.