Kim Cassisa, clarinet
This piece is in a traditional Sonata-Allegro form. There is an exposition with two contrasting themes, a development of the themes, and a recapitulation that is based on a modified version of the themes.

for microphones, cables, mixing board and speakers
Raise the volume of the microphones until feedback occurs. Filter the signal to find different sounds. Find a balance between taming and embracing the chaotic nature of the feedback. Don’t break anything, don’t hurt anyone.

for live piano, mono-channel MIDI piano
Alexander Toth, piano
This study represents a burgeoning interest in the “black MIDI” style, named so for the appearance of the score, which is drenched in masses of black note-heads. The MIDI interprets the score in a hyper-realistic manner, producing notes beyond the extremes of the actual instrument and performing at speeds much faster than is humanly possible. The compositional material is derived from the iconic Jaws theme. Characteristics of the primary motive saturate the structure of the piece to such an extent that the source material is nearly entirely obscured by its development. A somewhat non-linear form further exaggerates the ambiguity between genotype and phenotype.

for String Quintet
Louis Barker, violin
Amalia Helmkamp, violin
Vanessa Van Holland, viola
Jamie Lim, cello
Abigail Whitford, bass
The Forest takes listeners through the various emotions they may experience when walking through a forest. The piece starts with a sense of wonder and tranquility as one ventures into the woods, but then a curious sense of danger begins to emerge as the traveler starts to stray off of the trail and the terrain starts becoming more treacherous. However, the traveler soon finds their bearings along a stream at the foot of a cliff and finds comfort in the hidden world they discover downstream…
Ace White is a first year student at the University of Iowa, currently majoring in Physics and Music. Their musical journey started in fourth grade with the double bass, and their passion for music blossomed when they began the electric bass in fifth grade. They started arranging music for themself and their ensembles in sixth grade. Their adventures into composition began in eighth grade when they began songwriting. A year later they started composing scores for duets and trios, but their music still retained a more lyrical tone. Two years ago, they started writing music for larger ensembles and began experimenting with more abstract works. Their works tend to be programmatic, feature a heavy bass presence, and showcase dissonance in a variety of contexts.

for violoncello solo
Alexander Wemmie, violoncello
The piece, Light Blue, is inspired by Yujia’s mother. Yujia has always wanted to write a piece for her mother. This piece is melodic and full of hope.
Yujia Bai (b. 1999) is an international student from China. She is a freshman at the University of Iowa, majoring in Nursing Interest. Yujia is passionate about music and composition, and she has played the violin for 15 years. Yujia has played in All-State Orchestra, musicals, etc. She is now studying composition with Wenxin Li.

for double bass solo
Alexander Ferkey, double bass
There are various reasons for why a person may experience grief because there are many losses that are suffered. The depth of emotion felt from that loss creates an extensive range or "spectrum" of feelings. Grief is not a stable, passive emotion, but instead one that is sporadic and unstable. It cannot be ignored, quelled, or controlled, and any attempts to do so often end up causing even more pain. Grief has to be faced and fought to find a measure of healing and acceptance, a struggle which can last a lifetime. This struggle is represented in the shifting of moods: agitation that gives way to depression, bitterness growing into a boiling anger, and a rupture of chaotic emotions that lead to calm relief, though not complete acceptance. The purpose of the piece is not to poke fun at grief or imply that it can be contained within a composition; rather, it is meant to be a reminder that all people at one point or another suffer some kind of grief, and there is no shame in having to fight through grief.

for solo trombone
Alexander Spenceri, trombone
Abstract #2 has been written for either any possible instrument which has five different registers or human voice. In this piece [like traditional notation], the horizontal axis represents time (5-second blocks) and the vertical axis is pitch in five different registers. Dynamics have been shown as boxes and each box has a different spectrum of Gray (pale grey to black). Each spectrum is basically the maximum possible dynamic the performer can get to. In other words, if the spectrum is dark black, the performer is allowed to make a dynamic change from the quietest sounds to possible loudest ones. White is reserved for silence.
*Premiere 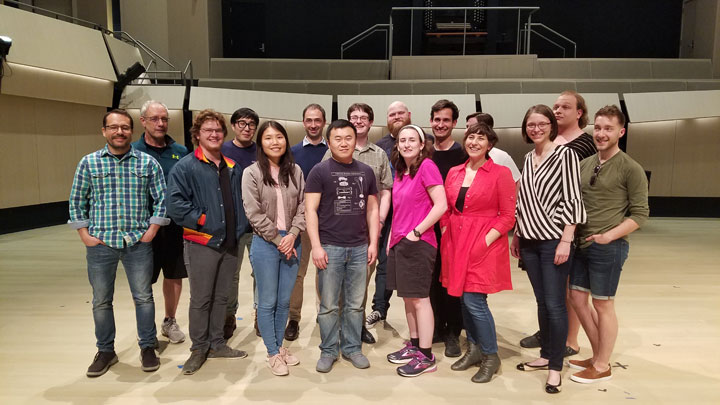