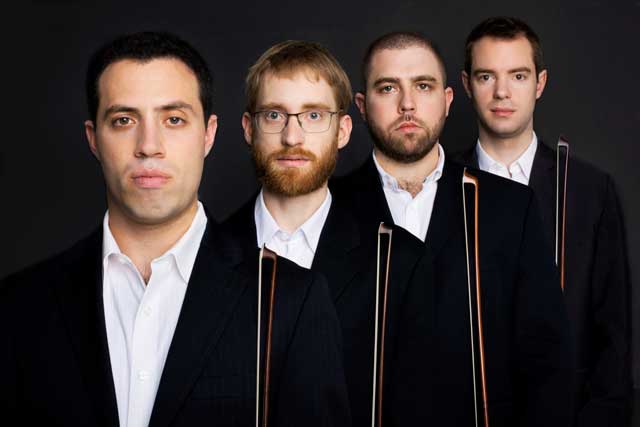 The JACK QUARTET electrifies audiences worldwide with "explosive virtuosity" (Boston Globe) and "viscerally exciting performances" (New York Times). David Patrick Stearns (Philadelphia Inquirer) proclaimed their performance as being "among the most stimulating new-music concerts of my experience." The Washington Post commented, "The string quartet may be a 250-year-old contraption, but young, brilliant groups like the JACK Quartet are keeping it thrillingly vital." Alex Ross (New Yorker) hailed their performance of Iannis Xenakis' complete string quartets as being "exceptional" and "beautifully harsh," and Mark Swed (Los Angeles Times) called their sold-out performances of Georg Friedrich Haas' String Quartet No. 3 In iij. Noct. "mind-blowingly good."

never bowing down
Almost everyone agrees that human beings have a thing called a soul; an indefinable, supernatural spirit that transcends the physical body and makes up the essence of who a person is. Many people who believe in souls also believe you can lose or degrade your soul by committing certain bad actions. Objectively, society mostly agrees regarding what actions will lead to the loss or degradation of a soul. A person, in striving for something he wants but does not deserve may foolishly harm or degrade his soul. But can a person give their soul away? Is it possible to trade your soul for some cheap, transient thing? If so, what seemingly innocent road might lead one to make this choice? To what or whom is the sold soul given? Also, to whom did it really belong in the first place?

This piece is dedicated to the JACK Quartet with all possible gratitude for their artistry, brilliance, and willingness to work with composers whose careers are still in the birthing stages. My own experiences with the JACK have been the highlight of my time as a composition student at the University of Iowa. I can’t thank them enough for their hard work, technical brilliance, and patience.

Jason Palamara is a fourth year PhD candidate in music composition at the University of Iowa. He is an active performer on the violin, guitar and laptop and was/is a founding member of the Bonecrusher Ensemble of Louisville, the newly constructed Laptop Orchestra at the University of Iowa (LOUI) and the 24+24 Hour Composition Project in Iowa City, IA. Jason currently works as the in-house composer and audio engineer for the University Of Iowa Department Of Dance. Jason composes music for many dance department projects, specializing in electroacoustic music, collaboration, and improvisation. In his spare time, he teaches songwriting and musicianship to the inmates at Oakdale Community Prison.

You can find links to his music, events and more info at www.jasonpalamara.com.

molto agitato
originated from short proto-gestures made up of pitches and rhythmic attack points. These proto-gestures were created using a simple probability based decision making system. These gestures were then enriched, simplified, and in other ways manipulated to create the unified piece. Individual lines are constantly changing rhythmic time levels, appearing many times faster or slower than the originating material. Expressive melodic lines change into aggressive rhythmic structures, often with no perceptible pulse.

Esotera III
focuses on issues of multi-temporality, non-linear narrative and material transformation. Rotations and metamorphoses of two archetypical spatial patterns are used to construct higher level structures. The emergence or saturation as well as the temporal placement of these patterns creates constant structural alterations in density, shape and flux.

Esotera is a cycle of works which deal with the dispositions of psyche.

Alexandros Spyrou is a Greek composer. His music has been performed in Greece, the United Kingdom and the United States by such ensembles as the London Sinfonietta, the JACK Quartet, the New York Miniaturist Ensemble, the Contemporary Directions Ensemble, Musica Nova Ensemble and DissonArt ensemble. He studied music theory and composition in Greece and the United Kingdom with Michael Finnissy, Evangelia Kikou, Georges Papoutsis and Athanasios Zervas. He is presently a PhD candidate at the University of Iowa studying composition with David Gompper.

Raw (String Quartet No. 2)
was written in parallel with the following poem by Kassia Lisinski.  †

ROUGH OUTLINE
An uncultivated break of truncate and musical rhyme,
it begins with a split and slow slime;
silence and a bang of naked skretch,
retching skinless, rough, and bright in time
as blood and grime. Then,
a slinging peal of tingling scrapes:
a quiet, a plucker, a spider scratch
a thatch of twine drawn vulgar--
the smaller signs of unmatched natural flesh
moving with porish toe taps
through a frisson of skin and scabby swell--
a frank hell of untempered discontent--
of violent timber splintered and
ribboned, abraded and bended
RAW
bursts crustless, gross, and unprotected
RAW
chafed, scathed, and bathed in crude
RAW
muscles its mass through air
and spits a taste copper and rare
RAW
RAW
RAW

† This poem is cited with permission from poet Kassia Lisinski.
The author reserves all rights for the work.

American composer Barry Sharp received his B.M. in Composition from Murray State University, and is currently pursuing his M.A. in Composition at the University of Iowa. Barry's works exploit the gravity of a single note or notes to bring about a variety of textures and atmospheres from which developments of material can arise. Barry’s composition teachers have included Mike D'Ambrosio, Brian Ciach, Lawrence Fritts, and David Gompper.

More of his work, including scores and recordings, can be found at www.barrysharpmusic.com.

Space Jumping
​is a programmatic work that attempts to reach the audience on two different levels: The first is to depict the act of space jumping, defined as jumping from an aircraft from outer space and falling to Earth's atmosphere before parachuting to a landing. The second, is to depict the journey a soul takes immediately after death, as it crosses through different dimensions of space and time before landing in it's final resting place. The colors and sensations a person experiences while space jumping could be the closest earthly activity comparable to this journey. ​

Joseph Z. Adams is a second year PhD student at the University of Iowa, where he studies with David Gompper, and is a Teaching Assistant in the Music Theory Department. He earned his Bachelor's Degree from New York University, his Masters Degree from the Hartt School at the University of Hartford, and since 2009, his music has has received dozens performances throughout the Upper Midwest. His greatest influences include early to mid 20th Century composers such Vaughan Williams, Ravel, and Bernstein, as well as Minimalism.

String Quartet No.5 (XonyaGar)
is my latest work continuing the idea of discovering Eastern/Iranian musical aesthetic in/with Western compositional techniques. Microtones and extended techniques are used in a very precise manner to express subtle traditional musical features found in this type of music.

Harmonic language is designed based on melodic intervals, including the idea of a drone to keep the original realization of music together with a sophisticated harmonic structure. To achieve that, vertical intervals are derived from the 4ths and 2nds that are traditionally used linearly in Eastern/Iranian music. Additionally, seconds are a quartertone sharper than western classical intervals and pitch generation is achieved by 4th transposition.

Nima Hamidi (b.1984) is a Persian composer and currently pursuing the PhD in Music Composition at the University of Iowa. He studied the setar, an Iranian traditional instrument, as well as the guitar before moving beginning his terminal degree in 2011. His music attempts to bring together aspects of Iranian traditional folk music with Western contemporary techniques. He is currently a Teaching Assistant in music theory and studies composition with David Gompper.

The Laughing Crane's Lament
has multiple interpretations. One is an allusion to a character of the same name from a contemporary dance that dealt with the philosophical issues of the Earth's balance. Another draws a connection to a dancer who played this role on stage. This was a dancer I knew and went to school with many years ago. This piece is written, in part, in memory of this person, the bird in flight that sadly took its own life at a young age. This work explores the aspects of such a dancer: the graceful and enchanting qualities that come into conflict with the underlying torments and bitter melancholy that may have plagued this gentle spirit.

Jonathan Wilson is a second-year doctoral student studying music composition with David Gompper at the University of Iowa. Jonathan received his Master of Music and Bachelor of Music degrees in music composition from Western Illinois University. He has also studied with Lawrence Fritts, James Romig, James Caldwell, Paul Paccione, and John Cooper. Jonathan is a member of the Society of Composers, Inc., the Iowa Composers Forum, and the American Composers Forum.

Joshua Marquez (b. 1990) is a Filipino-American composer currently pursuing a PhD in composition at the University of Iowa. Joshua holds degrees from the University of North Carolina at Greensboro (MM '13), and Campbell University (BA ‘11). Marquez's music has been performed by ensembles such as the JACK Quartet, Stony Brook Contemporary Chamber Players, Akropolis Reed Quintet, Quintet Sirocco, and the Cape Fear Wind Symphony along with performances at the New York City Electroacoustic Music Festival (NYCEMF 2014), the National Student Electronic Music Event, Birmingham New Music Festival, Circuit Bridges, and Vox Novus at venues such as Symphony Space, Abron Arts Center, Gallery MC, Weatherspoon Art Museum, Hulsey Recital Hall, Georgia Southern University and other universities and institutions. Joshua's music for film has also been featured at the Canada International Film Festival and the Utopia Film Festival.