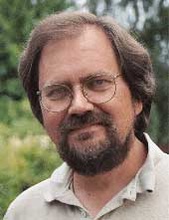 Awakening of the Heart, for piano trio

Awakening of the Heart was composed during a period of turmoil and loneliness. My longing for tenderness and intimacy and my hope for the future fill the piece, which I half-seriously thought of calling Naked Music - not because of any sexual overtones, but because it struck me as so emotionally exposed. My hopes were fulfilled several years later when I met Marie-Susanne, who I married and to whom I had been waiting to dedicate this composition. Awakening of the Heart was commissioned by The Barlow Endowment for Music Composition at Brigham Young University, and was premiered in April 2006 by the New York New Music Ensemble; it has also been performed by the Sher Jie Ensemble of the Sichuan Conservatory of Music (China), and the faculty piano trio of Ohio State University.

David Vayo (b. 1957) is Professor and head of the composition department at Illinois Wesleyan University, where he teaches composition and contemporary music and coordinates the Symposium of Contemporary Music and the New Music Cafe concert series. Vayo has also taught at Connecticut College and the National University of Costa Rica. He holds an A.Mus.D. in Composition from The University of Michigan, where his principal teachers were Leslie Bassett and William Bolcom; his M. Mus. and B. Mus. degrees are from Indiana University, where he studied with Frederick Fox and Juan Orrego-Salas.

Vayo has received awards and commissions from the John Simon Guggenheim Memorial Foundation, ASCAP, the Koussevitzky Music Foundations, the Barlow Endowment for Music Composition, the American Academy and Institute of Arts and Letters, the American Music Center, the National Association of College Wind and Percussion Instructors, and the Illinois Council for the Arts, and has been granted numerous artists' colony residencies. Over three hundred performances and broadcasts of his compositions have taken place, including recent performances in Mexico, Japan, the Netherlands, Hong Kong, and France and at Northwestern University, Ohio State University and CalArts. Festivals which have programmed his work include the International Trombone Festival, the International Double Reed Festival, the Grand Teton Music Festival, and three World Music Days of the International Society for Contemporary Music. His compositions are published by A. M. Percussion Publications, Bèrben/Italia Guitar Society Series, and the International Trombone Association Press. Vayo is also active as a pianist performing contemporary music and free improvisations.

Three Chôros and Three for the Road are the first and third in a series of pieces in chôro style I have written for Maurita Murphy Mead. Chôro is a genre of Brazilian urban popular instrumental music that began in Rio de Janeiro in the late 19th century. Typically, a choro ensemble includes a melody instrument (such as flute or bandolim, the Brazilian version of the mandolin), accompanied by cavaquinho (a small four-stringed guitar), guitar, and seven-string guitar. The performer of the main melody enjoys considerable interpretive freedom to vary ornamentation, articulation, and rhythm; the accompaniment and bass line are normally improvised.

Three for the Road for clarinet & piano

Luz e Sombra was composed in November 2006 for Maurita Murphy Mead and Rafael Dos Santos, who received the DMA in piano at Iowa and is now professor of piano at Cidade Universitaria, Campinas, Brazil; they gave the first performance at the University of Iowa in December 2006. The second and third pieces of the set date from October 2007. Maurita Mead and Shari Rhoads gave the first performance of Three Chôros in November 2007 at the University of Georgia, Athens, Ga. Three for the Road was written mostly in March 2008. Maurita Mead gave the first performance in October 2008 at an Iowa Composers Festival at Luther College, with pianist Jessica Paul. The title of the set and the pieces reflect Mead's longtime interest in fast cars and racing. Indeed, "Bye Bye Beetle" refers to Maurita's former car, a VW which was a lemon that Carousel Motors had to take back - she wound up with a Jetta. She came up with "90 on I-80" herself.

Michael Eckert has taught at the University of Iowa School of Music since 1985. His awards for composition include the Bearns Prize from Columbia University, a Charles E. Ives Scholarship from the National Institute of Arts and Letters, an NEA fellowship, and the Music Teachers National Association Distinguished Composer of the Year Award. He has been a fellow at the Charles Ives Center for American Music, and at the Composers Conference at Wellesley College.

In 2006 Eckert's Vamp for string orchestra was a first-round selection in the "International blitz-competition for composers 'Homage to Mozart'" in Moscow, where it was performed and broadcast by Chamber Orchestra Kremlin in January; the same orchestra played it in New York in October. His Echo's Song won second prize in the 2006 New York Virtuoso Singers Choral Composition Competition. In October 2006 his Wind Quintet was premiered by the Iowa Woodwind Quintet at a concert celebrating the 100th anniversary of the School of Music. Echo's Song and the instrumental sextet Point of No Return (2003) are recorded on Albany Records TROY900, and Wind Quintet on Albany CD TROY956.

Oboe Quartet (2007) for oboe and string trio was commissioned by Richard Mason, for whose on going support of my music, I am exceptionally grateful. The inspiration for the piece is two-fold. Firstly, the work is dedicated to composer Louis Karchin, whose superbly vibrant music continues to delight, surprise, and inspire me. Secondly, this quartet is directly inspired by the playing of a series of oboists who, through their performing, recording, and repertoire advocacy, have come to define the way I think about the instrument and its repertoire: Toni Marie Marchioni, Stephen Taylor, George Caird, Peggy Pearson, Jacqueline Leclair, and Cynthia Koledo De Almeida.

The oboe quartet genre tends to inspire two different kinds of works: in one type, the pieces are conceived as "mini-oboe concerti" with the oboe defined as a clear solo voice over the backing of the string trio; in the other type of work, the oboe is the "first among equals" in an integrated chamber music discourse. This work falls into the latter category. In recent years, wonderful oboe quartets from Yehudi Wyner (1999), Elliott Carter (2001), and Fred Lerdahl (2002) have continued to define an American voice in this genre.

This work is cast in a single movement, controlled by a loose variation form with the intent of creating a single musical "line" and narrative. From the beginning to the end, there is continuous melodic and harmonic development, working towards creating a structure which, though tightly controlled, is also somewhat improvisatory in spirit. The music can be grouped broadly into three sections, each of which is a large-scale variation and each also containing a number of overlapping smaller variations.

The opening, with its nervous cascades of pizzicato strings, is marked "tumbling wildly, with restless energy." Switching to bowed playing, the cello states the basic musical material of the piece: a whirling series of melodic intervals. An oboe cadenza ("colored" by the strings) begins the development and leads into a contrapuntal texture with interplay and flourishes between all four instruments. The next section is marked "keening, fierce lament."(Keening is defined as a "wailing lament for the dead.") The underlying pulse of the music is slow, but it is full in sonority and passionate in gesture. The shorter final section contains aspects of both the two preceding sections, as part of the ongoing development. In places, the music moves towards the raw and violent in affect. The final coda, however, is slow and lyrical as the oboe sings a last melody over "bell-like" chords in the strings.

Carson Cooman is an American composer with a catalogue of works in many forms: ranging from solo instrumental pieces to operas, and from orchestral works to hymn tunes. He is in continual demand for new commissions, and his music has been performed on all six inhabited continents. Cooman's music appears on over twenty-five recordings, including seven complete CDs on the Naxos, Albany, and Zimbel labels. Cooman's primary composition studies have been with Bernard Rands, Judith Weir, Alan Fletcher and James Willey. As an active concert organist, Cooman specializes exclusively in the performance of new music. Over 130 new works have been composed for him by composers from around the world, and his performances of the work of contemporary composers can be heard on a number of CD recordings. Cooman is also a writer on musical subjects, producing articles and reviews frequently for a number of international publications. He is currently the editor of Living Music Journal and serves as an active consultant on music business matters to composers and performing organizations. For more information, visit his website.

Quintet for Piano and String Quartet

Piano Quintet is written in three movements, and the movement titles each have a certain poetical or descriptive quality. "Shaping the Invisible" plays with the elusive, vaporous, and, at the same time, physical quality of music. In "Glaciers," there is a certain timelessness, and the music appears to be silvery and frozen. "Spring Images" is clear, sharp, and lively. The title is also the title of a poem by James Wright, which begins with these lines:

Two athletes
Are dancing in the cathedral
Of the wind

"Shaping the Invisible" was composed in 2004, and was performed by the Cassatt Quartet and pianist Steven Heyman in Syracuse, New York. I was very happy when the opportunity arose to "finish" the quintet by writing two additional movements on commission from the Finger Lakes Chamber Ensemble, and the entire composition was performed by this ensemble in Ithaca, New York, in 2006.

Music written by David Liptak has been performed by such ensembles as the San Francisco Symphony, the Montreal Symphony, the St. Paul Chamber Orchestra, and the Rochester Philharmonic Orchestra; and his chamber music has been played by the Chamber Music Society of Lincoln Center, the Group for Contemporary Music, EARPLAY, the Ying and Cassatt String Quartets, the Dinosaur Annex Ensemble, the New York New Music Ensemble, the 20th-Century Consort, and by many other soloists and chamber ensembles. Recent recordings of his music have appeared on the Bridge, Albany, and Gasparo recording companies. Liptak has received commissions from the Fromm Foundation, the Barlow Endowment for Music Composition, the Meet the Composer/Reader's Digest Commissioning Program, the Institute for American Music, and from a varied number of professional musical organizations. In 1995 David Liptak was awarded the Elise L. Stoeger Prize, given by the Chamber Music Society of Lincoln Center in recognition of distinguished achievement in the field of chamber music composition. Other recent honors include awards from the American Academy of Arts and Letters in 2002. David Liptak is Professor of Composition at the Eastman School of Music in Rochester, New York.