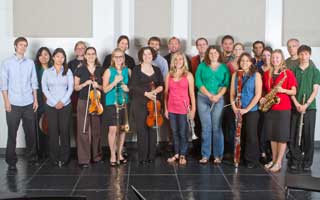 After receiving his Bachelor's degree at the Eastman School of Music and Master's degree at Yale University, Andrew Parker finished doctoral studies at the University of Michigan where he was the Graduate Student Instructor. In his time at the University of Michigan, Andrew was a finalist in the concerto competition and was asked to represent the university by performing at the illustrious Conservatory Project, a recital series at the Kennedy Center. He also had the opportunity to collaborate with many of the faculty including Nancy Ambrose King, Jeffrey Lyman, Donald Sinta, and Amy Porter among others. He has studied under Jeannette Bittar, Richard Killmer, and Nancy Ambrose King, as well as Elaine Douvas and Robert Walters.

Andrew has also taught and coached chamber music at various international music festivals, including the FEMUSC festival in Brazil, the Hartwick Festival in New York, and the Kinhaven Music School in Vermont. In 2009 he was appointed the English horn Fellow at the Aspen Music Festival where he performed on a faculty chamber music recital with Elaine Douvas, Joaquin Valdepenas, Nancy Goeres, and Nadine Asin. He has also attended other workshops and summer programs such as the Sarasota Music Festival, the Carnegie Hall Orchestral Workshop for Winds and Brass, and the Pine Mountain Music Festival.

Of Mountains Lost to Time

is a single-movement work for English horn and string quartet, or English horn and string chamber orchestra. I composed this piece 2009-2010. The inspiration for Of Mountains Lost to Time was the sense of mystery and timelessness of mountains and the way human beings respond to mountains, either by living on or near them, or by experiencing them as visitors. The direct inspiration came from the Blue Ridge Mountains of Virginia, although I feel that similar feelings are evoked by different mountain ranges around the world. There is some reference to music created by people for whom these mountains are part of their lives on an ongoing basis. The combination of English horn and strings seemed particularly appropriate to deal with the mysterious grandeur of mountain ranges.

The piece begins with the violins playing ethereal and almost other-worldly sonorities. A melodic line gradually emerges in the English horn, which is then joined by the cello. As the English horn moves toward a climax, all of the strings join in supporting the line. The violins return to the opening sonorities, this time joined by dark sounds in the lower strings. The resulting sonority provides the backdrop for an English horn cadenza.

The next section is very fast and rhythmic. The English horn generally alternates with the strings, but at times they converge in the same material. Following a strong climax of sonorous arpeggios in the strings, a calmer section begins. Although this section is actually in the same tempo, the English horn's melodic line moves in long note values, as the strings provide a more energized accompaniment. The material that began the fast and rhythmic section returns, this time modified and expanded.

The English horn begins a cadenza, but is initially interrupted by the sonorous string arpeggios. The cadenza then continues, leading to a brief expressive contrapuntal section started by the strings, which are soon joined by the English horn. Following the English horn's only complete statement of a melody that might or might not be a quotation, a brief cadenza-like passage in the first violin, utilizing material that was first introduced by the English horn near the beginning of the piece, leads to a transition to the a return of the ethereal sonorities from the beginning. This time the sonorities are even more other-worldly in character, being played in a very high register in harmonics. The English horn returns with a melodic line marked "very relaxed, serene" that brings the piece to its conclusion.

His compositions include a broad range of solo, chamber, orchestral, vocal, choral, multi-media, and electronic music. He has received grants and awards from the National Endowment for the Arts, the Ohio Arts Council, the Bascom Little Fund, the Kent State University Research Council, the American Society of Composers, Authors, and Publishers (ASCAP), and the American Music Center. In 1986 he was awarded the Cleveland Arts Prize for music composition. His music has been performed throughout the United States and in Europe by numerous orchestras, chamber ensembles, and soloists.

The title "Scree" came to me when I was backpacking in the Matterhorn Peak area of the Sierra Nevada mountains in California. Scree is a type of rock (in addition to boulders and talus) well-known to climbers: the small, broken stones that tend to accumulate toward the bottom of a steep slope. Scree, during the course of its seventeen-minute, four-movement length, presents all three musicians in virtuosic roles. The cello takes the lead much of the time in melodic lines that vary widely in expressive character and which make use of the cello's greater-than-four-octave range. The piano and percussion at times accompany or partially double the cello, but they play very active roles nonetheless. At the end of the first, third and fourth movements the percussion takes the lead in serene, static music that features metal sounds and harmonics in cello and piano. The last occurrence of this music will give rise to the final melody in the cello, now mainly in harmonics, accompanied by gentle chords and quiet bells. Scree, completed in July, 1997 and premiered in October of that year, was commissioned by the Core Ensemble, Duncan Theater, Mid-America Center for Contemporary Music and the Boston Conservatory of Music as part of the national series of works from Meet the Composer/Arts Endowment Commissioning Music/USA, with support from The Helen F. Whitaker Fund.   — Donald Crockett

Donald Crockett is Chair of the Composition Department and Director of the Contemporary Music Ensemble at the USC Thornton School of Music, and Senior Composer-in-Residence with the Chamber Music Conference and Composers' Forum of the East. He has received commissions from the Los Angeles Chamber Orchestra, Kronos Quartet, Los Angeles Philharmonic, Hilliard Ensemble, Pittsburgh New Music Ensemble and the California EAR Unit, among many others. Recent projects include commissions from the Harvard Musical Association for violist Kate Vincent and Firebird Ensemble, the Claremont Trio and a chamber opera, The Face, based on a novella in verse by poet David St. John. Donald Crockett was awarded a Guggenheim Fellowship in 2006, and has also received grants and prizes from the American Academy of Arts and Letters, Barlow Endowment, Copland Fund, Kennedy Center Friedheim Awards, Meet the Composer, the National Endowment for the Arts and many others. His music is published by Keiser Classical and Doberman/Yppan and recorded on the Albany, CRI, ECM, Laurel, Orion and Pro Arte/Fanfare labels. A frequent guest conductor with new music ensembles nationally, Donald Crockett has been very active over the years as a composer and conductor with the venerable and famed Monday Evening Concerts in Los Angeles. His recordings as a conductor can be found on the ECM, New World and CRI labels.

scored for amplified Pierrot Ensemble and interactive electronics, Spring Tides was inspired by the pull of the moon and sun on the flow of the tides, highest when the moon and sun are directly lined up with the earth. The very highest, or spring tides, occur when the moon is either full or new, and the gravitational pull of moon and the sun are combined. In Spring Tides, this phenomenon metaphorically animates the pull between acoustic and digital sound, between controlled improvisation and exactly specified elements, between slow and surging motion, and between shifting fields of timbre and pitch. Spring Tides, commissioned and premiered by Da Capo Chamber Players, was made possible in part by a composer fellowship from the Virginia Commission for the Arts.

Timbral exploration and invention, as well as collaboration with musicians, artists and communities are central to Judith Shatin's musical life. She is William R. Kenan, Jr. Professor at the University of Virginia, where her fascination with the sounding world and the combining of digital and acoustic media led her to found the Virginia Center for Computer Music, now a locus for a PhD program in Composition and Computing Technologies. Her music has been called "highly inventive... on every level; hugely enjoyable and deeply involving (Washington Post). Shatin has been commissioned by organizations including the Barlow Foundation, Fromm Foundation, Kronos Quartet, McKim Fund of the Library of Congress and the National Symphony. Her music can be heard on the Capstone, Innova, Neuma, New World and Sonora labels. A master teacher, Shatin has served as senior composer at the Wellesley Composers Forum and as BMI guest composer at Vanderbilt University. For more information, visit www.judithshatin.com.

captures a moment of realization of understanding past actions and future desires. In a split second, hindsight becomes clear, a knot becomes untied, and a vision for what may be materializes. In "Navigation," the journey begins. As the orchestra sets a tapestry of motion beneath the oboe, the solo line weaves a melodic line that darts among the instruments. As the movement builds towards its climax, the oboe line becomes frantic, veering off course to an unsettling conclusion. In order to understand previous decisions and ramifications, one has to be willing to examine oneself. How one sees the world represents how one sees itself. This lyrical movement, "Mirror Unto Ourselves," depicts this romantic, idealized vision. The orchestra creates an undulating backdrop for the oboe, singing with greater freedom as the movement progresses. True understanding of oneself often occurs when all else is quiet. Many artists find the most productive and clear-headed time to be in the middle of night, when all that surrounds them is asleep. In this moment free of distractions, or "The Bewitching Hour," the 'cello takes over, beginning the movement as the oboe supports the line. They join in a duet, trading lines and building upon one another towards a climatic moment of stasis. After that, the oboe once again takes over as the 'cello fades into the background. "To See" builds upon a drone in this pseudo-rondo movement. The oboe sets the mood, with various percussion instruments, piano, and harp constantly re-energizing the background while others emerge in various combinations perpetually pushing and building towards its inevitable conclusion.

Ching-chu Hu's music has been performed in the United States, England, Germany, Russia, Austria, China, Taiwan, and Australia. Recent honors have included composer-in-residence at the Piccolo Spoleto Festival, and guest composer at the American Music Week Festival in Sofia, Bulgaria. Hu has been a composition fellow at the Aspen and Bowdoin Music Festivals, Yaddo, The MacDowell Colony, and the Banff Centre for the Arts. He has received performances in various national and international festivals and concerts, including the Alternativa Festival (Center "DOM") in Moscow. Born in Iowa City, Iowa, Ching-chu Hu studied at Yale University, Freiburg Musikhochschule in Freiburg, Germany, The University of Iowa, and the University of Michigan, where he earned his Doctorate of Musical Arts in Composition. He is active as a pianist and conductor, and wrote the scores for several short award-winning films. Upcoming commissioned projects include a work for the Western Springs Suzuki Talent Education Program's 30th Anniversary Concert in Chicago Symphony Center's Orchestra Hall in March, 2010 as well as Newark Granville Youth Symphony's John F. Kennedy Center for the Performing Arts performance in May, 2011. His music can be heard on the ERM Media's "Masterworks of the New Era" CD series (vol. 4), Albany Records CD "Finnegan's Wake" (Troy 680), "Star of the County Down" (Troy 937), "Spirals: American Music in Moscow" (Troy 1095), "Vive Concertante" (Troy 1110-11), "Violinguistics" (Troy 1138) and Capstone Records' "Journeys" (CPS-8809). Ching-chu Hu is Associate Professor of Composition and Theory at and Chair of the Music Department.