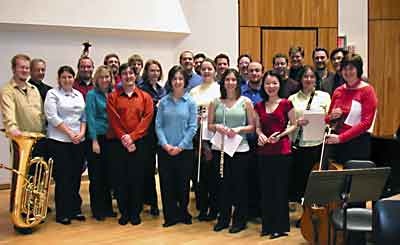 Piano Quintet was commissioned by the University of Iowa School of Music in celebration of its centennial. The melodic, harmonic, and formal structures of the work are all informed by the interval of a perfect fourth, used as a way of structurally offsetting key areas contrapuntally. I exploited the interval's chameleon-like relationship to the tonic and layered closely related key areas to create vertical configurations that are rich in timbre and melodic content. This allowed me to adeptly move in and out of structurally significant foreign key areas. The three-movement work is played without pause.

Joseph Dangerfield is Assistant Professor of music composition and theory, as well as the director of orchestral activities at Coe College in Cedar Rapids, IA. He studied composition at Marshall University (BFA 1999) with Michael Golden and John Allemeier, Bowling Green State University (MM 2002) with Marilyn Shrude and Elainie Lillios, and the University of Iowa (PhD 2005) with David Gompper and Lawrence Fritts.

Dangerfield's compositions are heard throughout the United States and Europe at various venues. His work The Waves Roll on, Thundering and Shimmering (symphonic complementation plus piano, one per part, with two percussionists), was recently commissioned and performed by the Studio for New Music Ensemble at the Moscow Conservatory. Dreams of Fin, for violin and piano, commissioned by the Austrian violinist Wolfgang David, was premiered at the Kuenstlerklub in Frankfurt, Germany, and recorded by David and Gompper for their third CD of new music for violin and piano. Current projects include a commission by David for a second violin and piano work, a commission by Russian pianist Yulia Kozlova for a piano solo, and a consortium commission for a new work for symphonic band.

As a composer, I have a tendency to write longer single movement pieces. 4 breaks that tendency because it is a multi-movement work. The title refers to the number of movements and the number of performers. For me, the main challenge in writing this piece was to reconcile the relationships between the different movements. The first two movements are complete ideas, independent from one another. The third movement, which starts as a fugue, functions as the development section for the entire piece. The fugal subject combines motivic material from the first two movements, and as it develops, material is drawn from the other movements. The final movement is more of a coda than a recapitulation, and restates material from the previous three.

John Allemeier holds degrees in composition from the University of Iowa (Ph.D.), Northwestern (MM) and a BM in Performance from Augustana College. He has studied at the 41st and 42nd Internationalen Ferienkurse fuer Neue Musik in Darmstadt, and the 6th International Composition Course in the Czech Republic.

Before I started writing Momenta, I reflected on my time at Iowa and realized that in all aspects of my life, that experience was a crucial launching point. The momentum was so great that it caused my family and I to pull up roots to begin the next phase of our lives. As I started working on this composition, I found myself gravitating towards a more chromatic language than I have been writing -- a language much like I was using as a student here. What is different is the way in which those angular materials are used to create longer lines and more formal unity. The piece is in two large sections, from slow to fast with a few wrinkles in between. I would like to thank David Gompper, the Center for New Music, and the School of Music for presenting me with this opportunity, and am honored to help commemorate the School of Music's 100th anniversary.

David Maki holds degrees in composition from Northern Illinois University (B.Mus.), the University of Iowa (M.A.), and the University of Michigan (D.M.A.), where he was a Regents Fellow. His composition teachers include Jan Bach, David Gompper, Evan Chambers, Bright Sheng and Michael Daugherty, while his piano teachers include Donald Walker and Logan Skelton. His music has been performed by ensembles such as the University of Iowa Center For New Music, Brave New Works, Prime Directive, and the Indiana University Contemporary Vocal Ensemble. Maki also is active as a performer of new music and with pianist Ashlee Mack, is planning a concert tour featuring new works for two pianos. He is currently an assistant professor of composition and theory at Northern Illinois University.

A Tempered Wish deals with Chinese sounds I recall from my childhood. Many a weekend morning I would wake up with Chinese folk, orchestral, and operatic music reverberating throughout the house. I've always appreciated the inflections, the energy, and the "feel" of Chinese folk music and wanted to capture that for the violin. In addition, colorful, bright and piercing sounds of instruments such as the sheng (a Chinese aerophone) have made a lasting impression. A Tempered Wish is a one-movement work that has three contrasting sections. The first has a slower folk music feel. The trumpet signifies the second section, which recalls the bright and nasal colors of a Chinese opera. This is followed by a faster folk-song conclusion.

I am honored to have had the opportunity to compose a work celebrating the centennial of the University of Iowa School of Music. Born and raised in Iowa City, the UI School of Music has been one of my primary learning institutions since my secondary school days. From piano competitions to All-State rehearsals, from lessons to masterclasses, I have wandered these halls since the 1970's. Returning in the 1990's to complete a masters in composition and a master of fine arts in conducting have prepared me well in my career today as a composer and conductor in academia. To be asked to write for the Center for New Music season is truly a meaningful experience and I wanted to capture an aspect of my childhood that is entwined with my musical development. I thank the 2006-2007 members of the Center for New Music Ensemble, director David Gompper, and violinist Scott Conklin for their work and preparation for the concert this evening.

Ching-chu Hu's music has been performed in the United States, England, Germany, Russia, Austria, China, Taiwan, and Australia, and reviews have described his music as "incredible" and "deeply moving." Recent honors have included composer-in-residence at the Piccolo Spoleto Festival, and guest composer at the American Music Week Festival in Sofia, Bulgaria. He has been a composition fellow at the Aspen and Bowdoin Music Festivals, the Banff Centre for the Arts, and Yaddo, and has received performances in various national and international festivals and concerts, including the Alternativa Festival (Center "DOM") in Moscow.

Born in Iowa City, Iowa, Ching-chu Hu studied at Yale University, Freiburg Musikhochschule in Freiburg, Germany, The University of Iowa, and the University of Michigan, where he earned his Doctorate of Musical Arts in Composition. He is active as a pianist and conductor, and wrote the scores for several short award-winning films. Recent commissions include works for the Granville Bicentennial Committee, the University of Iowa School of Music's Centennial celebration, and the Upper Arlington Community Orchestra.

Conductor Donald Portnoy and the Charleston Symphony Orchestra performed In Frozen Distance and violinist Wolfgang David premiered Passions at Wigmore Hall in London, England. Other notable performers include flutist Betty Bang Mather, bassist Robert Black, and the National Chinese Dance and Opera Orchestra. His music can be heard on the ERM Media's "Masterworks of the New Era" CD series (vol. 4) and on the Albany Records CD "Finnegan's Wake." Ching-chu Hu is currently the Bayley-Bowen Fellow and Assistant Professor of Composition and Theory at Denison University in Ohio, where he recently received tenure and promotion to Associate Professor.