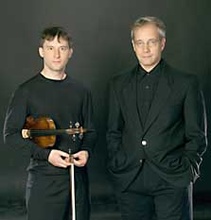 The Second in a Tour of Concerts by

In the space of a few short years, Wolfgang David has ensconced himself on the international stage, both as a recitalist, and as a guest soloist with many of the world's leading orchestras, such as the Royal Philharmonic Orchestra, Vienna Radio Symphony Orchestra, Johannesburg Philharmonic Orchestra, Berne Symphony Orchestra, New York Virtuosi etc. He has been well received by the press--the Washington Post writes that he has "scaled the heights of music-making," while The Strad praises his playing for being as "emotionally wide-ranging as one could hope for," and Thomas Frost, Senior Executive Producer at SONY Classical, foresees for him "a significant international concert and recording career."

Admitted to the University for Music in Vienna at the age of eight, David studied there for many years with Rainer Kuechl, the concertmaster of the Vienna Philharmonic Orchestra. He subsequently continued his studies at the Musikhochschule in Cologne with Igor Ozim, and at the Guildhall School of Music in London with Yfrah Neaman.

The winner of many competitions and prizes, David has performed in major halls such as Konzerthaus and Musikverein Hall in Vienna, Carnegie Hall in New York, Cerritos Center in Los Angeles, the Wigmore Hall in London, and Philharmonie in Cologne. He has concertized in over 30 countries and tours regularly throughout Europe, the United States, South Africa, and South Korea. In 2006 David recorded an album of compositions by the King of Thailand Bhumibol Adulyadej with the Royal Philharmonic Orchestra (London) under the baton of Emmanuel Siffert.

Highlights of his career have included concerts at the Great Assembly Hall of the United Nations in New York in the presence of Secretary General Kofi Annan, and a concert in Bangkok, given for the Queen of Thailand.

Wolfgang David performs on a violin built in 1715 by Carlo Bergonzi, Cremona, on exclusive loan to him from the Austrian National Bank. Wolfgang David has recorded a CD with the Royal Philharmonic Orchestra under the baton of Emmanuel Siffert and two albums with the American pianist David Gompper.

David Gompper has lived and worked professionally as a pianist, a conductor, and a composer in New York, San Diego, London, Nigeria, Michigan, Texas and Iowa. He studied at the Royal College of Music in London with Jeremy Dale Roberts, Humphrey Searle and Phyllis Sellick. After teaching in Nigeria, he received his doctorate at the University of Michigan, taught at the University of Texas, Arlington, and since 1991 has been Professor of Composition and Director of the Center for New Music at the University of Iowa. In 2002 - 2003 Gompper was in Russia as a Fulbright Scholar, teaching, performing and conducting at the Moscow Conservatory.

Gompper's compositions are heard throughout the United States and Europe. In 1999 his Transitus (for wind ensemble) premiered at Carnegie Hall, and a number of his works have premiered in London's Wigmore Hall, including: Hommage a W. A. (William Albright) for piano; and Shades of Love, a song cycle on the poetry of Constantin Cavafy. The Slovac Radio Orchestra will record Gompper's Violin Concerto later this fall.

utilizes a series of fifths, bisected at various junctures by minor seconds, to create melodic lines that work a "path" through the aggregate. The five-part, one movement form creates a dialogue with Rondo form in that the work continually returns to the same resonant material. Pathways is dedicated to my wife, Ami, who continues to support my work and the path that I chose. JD

Joseph Dangerfield's (b. 1977) compositions are heard throughout the United States on conferences of the Society of Composers Inc., the MusicX Festival at the Cincinnati Conservatory, the San Francisco New Music Festival, and the Society for Electro-Acoustic Music in the United States, among others. His works have been performed in such international venues as the Festival of American Music in Moscow, the Frankfurter KuenstlerKlub, the Conservatorio di Giuseppe Tartini, Trieste, Italy, and in Cairo, Egypt. In December, Dangerfield will complete a residency in the Leighton Studios at the Banff Centre in Alberta, Canada.

He studied composition at Marshall University (BFA 1999) with Michael Golden and John Allemeier, Bowling Green State University (MM 2002) with Marilyn Shrude and Mikel Kuehn, and the University of Iowa (PhD 2005) with David Gompper.

He currently resides in Cedar Rapids, IA, where he is Assistant Professor of music composition and theory, as well as the director of orchestral activities at Coe College.

was written for Wolfgang David (violin) and David Gompper (piano). The work's opening sonority is derived from the closing moments of David Gompper's Star of the County Down, a sonority that appears in various guises throughout the harmonic terrain of (Ex)tracts. The piece is essentially divided in two. While in the first half the piano's primary role is to provide resonance for the violin's free melodies, something of a exchanging of roles takes place in the initial stages of the second half during which the piano becomes more extroverted and the violin extracts simpler melodies from the piano's angular passages. Eventually both instruments take on an equal level of energy and activity, at times supporting one another and at other times interrupting each other. The piece closes with a placid coda marked "ethereal" in the score. LD

Luke Dahn earned a Ph.D. in composition from the University of Iowa (2006). He is currently assistant professor at Northwestern College in Orange City, Iowa, after serving as visiting assistant professor at the University of Iowa in 2006-2007. Dahn holds additional in music theory and composition from Western Michigan University and Houston Baptist University and his principal teachers have included David Gompper, C. Curtis-Smith and Ann K. Gebuhr.

was written during a productive summer of 1886, along with the F-major Cello Sonata and the C-minor Piano Trio. In the traditional three-movements scheme, this Sonata is probably considered by many performers as the most difficult to render musically (the third Sonata is by far the most challenging technically). The first movement is based on "song," with the first theme similar to the famous Prize Song from Wagner's Die Meistersinger, and the second theme taken from his own lieder of op. 105, no. 1. The movement is an excellent example of Brahms's fusion between the dramatic and lyrical elements that comprises the sonata form. The second movement alternates between a slow Andante theme and a scherzo, and is the most attractive musically. The final, grand and imposing, is similar to the first: both lyrical and expressive.

Johannes Brahms (1833 - 1897) first became known as a pianist, having performed his first solo concert at the age of 15. He only became internationally known as a composer some 30 years after beginning his musical training, mostly due to his open opposition to the new Germanic school of composition, and the aesthetic principles of composers such as Franz Liszt. After the first complete performance of the German Requiem in 1869, Brahms' music became rapturously received and he finally enjoyed international renown and financial security. Brahms died of cancer at the age of 63 at his home in Vienna.

the second of three Partitas that Bach wrote for solo violin, is comprised of five dance-based movements. The final, entitled Chaconne, is not only longer than any of the other movements but by all rights is considered a separate work. Bach took his cue from the French composers, who replaced the quick paced gigues with the Chaconne as concluding movements. The rondo form was traditionally applied to the Chaconne (prototype: major key, triple meter, with a repeating four-bar theme starting on beat two), and Bach follows suit. Formally, the fourteen-minute work is in three large sections, with the middle section in the major mode. The theme is worked through a continuous set of variations, using multiple techniques to alter and develop the principal motive. Often performed, Bach's Chaconne is considered the most important repertoire for the solo violin. DKG

Johann Sebastian Bach (1685 - 1750) was one of the greatest contrapuntalists and most prolific composers of the 18th century. He brought the Baroque era to the point of greatest maturity and assimilated the utmost variety of rhythms and textures from all over Europe. Bach was able to manipulate motive on both small and large scales, and his compositions exhibit a highly evolved sense of harmonic function and control.

for violin and piano, is a three-movement (fast, slow, fast) work performed without break and that serves as the basis for my Violin Concerto. All pitch material comes from a specific series of chords built from "broken fifths." The linear and vertical aspects of the motive create unique circuits or pathways through what I imagine to be tunnels or corridors, filaments or chains of ideas, flexible, that collect or recollect in time and space. DKG