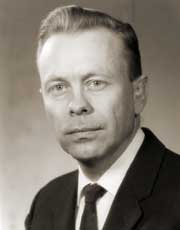 A tribute to the life and works of

Sonata (No. 1) for Clarinet and Piano

Originally entitled Sonatina, the sonata is the earliest of Hervig's chamber works. The sonata was completed in 1953 and was written for two faculty members at Long Beach State College, Bertram McGarrity and David Vazquez. The sonata is in three movements: Moderato/ Allegro, Andante, and Allegro giocoso. In 1997 Hervig chose this sonata for a concert given in honor of his 80th birthday.

Hervig has called this sonata neoclassical in form. The first and third movements have the general forms expected in a multi-movement sonata: the first movement in sonata form, and the third in rondo form. The second movement, which in the traditional multi-movement sonata has no strictly assigned form, is here a lyrical exploration of two ideas.

The clarinet part is especially well written and idiomatic for the instrument, with sustained notes in the clarion register to accent beautiful tone, passages of running sixteenth notes, and the wide skips that can sound so effortless on the clarinet. In addition, the full range of both the clarinet and piano are used. The piano part is a more active participant in this sonata than in many of Hervig's other works with piano accompaniment.

The second movement, a slow Andante, is one of Hervig's most beautiful slow movements. This movement relies more on color than on tune. The clarinet spins out a long melody in quarter and eighth notes as Hervig takes the most minimal of musical materials, conjunct motion versus disjunct motion, and creates a lovely atmosphere. Throughout the movement, the piano moves in slow, unhurried quarter notes, occasionally dwelling on a motive long enough to establish it as a brief ostinato before moving on to other material. Writing about the work more than 40 years later, Hervig still characterized the work as containing "ostinatos and fugues everywhere."     -Kate Stuart †

One of Hervig's last compositions, A Diversion, was written for Emil Miland, a cellist who lives and works in San Francisco. The first four letters of his name, E-M-I-L are translated into four pitches: E—C—G-sharp—B. This tetrachord serves as the basis for much of harmonic and motivic content of the brief single-movement work. Formally, it is in three parts: a slow and lyrical passage in mid to high singing range for the cello, followed by a faster middle part with running 16ths in both instruments that breaks apart into syncopated clusters in the piano.     -D. Gompper

is one of only two works for solo voice and piano by Richard Hervig. The set was composed in 1982, first performed by the Center for New Music in 1983, was the winning composition in the 1984 Art Song Composition sponsored by the National Association of Teachers of Singing, and was published by Associated Music Publishers in 1985. Hervig dedicated the work to his wife Verna. The title "Romantic" refers to the poetry used for the text of the songs, poetry by the Romantic poets Lord Byron, Alfred Lord Tennyson, Percy Bysshe Shelly (two), and William Wordsworth.

The vocal range of the work is very moderate, spanning only an octave and one-half. Nearly the entire range of the piano is used at one time or another, though most of the writing is for the middle of the range. The only special piano technique called for is depressing bass keys silently to allow the strings to vibrate sympathetically with the treble.

The five songs are similar in style. They are all atonal and for the most part not very metrical. The songs are through-composed, even in the one instance when the text is repeated. The first four songs end with a unifying gesture: melodic minor seconds in either the voice, the piano, or both. The fifth song, although it does not end with a minor second, emphasizes the minor second, and ends with a harmonic minor sixteenth.

Working with a text, either setting the text for voice, as here, or using a text as inspiration provides the composer with an opportunity to indulge in word painting. In Five Romantic Songs the word painting is clearer and often playful.     -Kate Stuart †

Sonata for Violin and Piano

has been Hervig's last work entitled Sonata. Sonata for Violin and Piano was written in 1979, published in 1981 by Associated Music Publishers, and is currently out of print. Hervig wrote another sonata for violin in the 1950s, but he had suppressed the first by the time the second was written.

As is typical in Hervig's sonatas, the work is in three movements. The first movement is in a variety of tempos, ranging from slow to moderate. The second movement is in a slow tempo, and the third is lively.

Overall, the texture in this sonata is rather sparse. Even the thick simultaneities in the piano are often produced by sounding consecutive sixteenth notes rather than by striking them all at once. The sparse texture also heightens the effect of a dialogue by having a texture in the piano similar to that possible in the violin.

Hervig's writing in this sonata displays his usual deftly idiomatic touch. The wild, disjunct figuration in the violin regularly employs perfect fifths, often the open strings, to fit under the hand nicely. Double stops are also used. The full ranges of both the violin and piano are employed.

Hervig continued to write music that, while still exciting, vigorous, and sometimes loud, is lyrical and has a gentler patina to it. A strong similarity between other works from the 1970s is Hervig's continued use of ostinatos glazed with the sound of the minimalists. Both Chamber Music for Six Players and Sonata for Violin and Piano end with minimalist figuration fading into nothing.     -Kate Stuart †

In Summer Season, for string orchestra

was commissioned by the Preucil School String Orchestra to open the Midwest International Band and Orchestra Directors Clinic, held in Chicago in December of 1988. The work was completed in July of 1988, and revised in March of the following year. The slow middle section is in memory of Hervig's wife, Verna, who passed away in the summer of 1987.

The work was intended for an accomplished school orchestra, and the ranges of the instruments, especially the first violins and the contrabasses, reflect this.     -Kate Stuart †

† The cited program notes are excerpts from a PhD dissertation on the Life and Work of Richard B. Hervig, authored by Kate Rose Stuart in 2000. The notes are used here by permission granted on 8 March 2011.