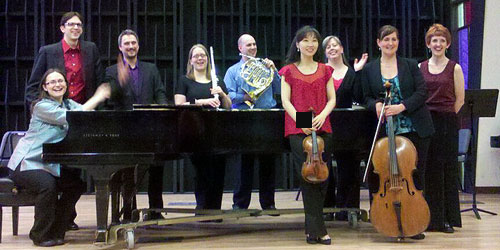 I Hear the Sound that has Fallen Silent

is a part of a Triptych entitled "In the Soft Moonlight." It's nature is independent and can be performed separately. The basis of this work is a collection of rhythmic figures with a special quality: flickering rhythmic figures have been extracted from various structures based on reoccurring Russian national plots, and is reflected in the overall form of the work. The "pulsation" of voices develops as a general prayer for happiness and well-being.

This composition was performed twice in the U.S.: in 2006 at the University of Iowa Center for New Music, and a second time with ensemble: Périphérie, Joseph Dangerfield, conductor.

Born in Russia, Irina Dubkova began composing at the age of five. After completing her formal training as a pianist, she graduated from the Moscow Conservatory in 1982 in composition and continued with post-graduate studies in composition with Professor Roman Ledeniov and theory with Yuri Kholopov.

From 1982 to 1985, Dubkova was musical editor in the USSR State Radio and TV Company. Irina Dubkova has taught in the Composition Department at the Moscow State P.I. Tchaikovsky Conservatory since 1995.

Irina Dubkova has participated in many competitions and festivals. She was a winner in the Moscow International Young Composer's Competition, in 1980 with Four Romances on texts of Sergei Yesenin for baritone and piano; in 1982 with her Symphony No. 1; in 1985 with a vocal cycle for children; in 1987 with Allegro for symphony orchestra. Her compositions have been performed regularly at the annual festivals Moscow Autumn, Universe of Sound, Nippon Kokoro, Earino Spring Festival, International Organ Gedike's Festival, and Meeting of the Friends. Performances of Dubkova's symphonic, chamber, vocal and choral music have been heard across the Russia and in many regions of the world.

was composed in 2012 for three ensembles: ensemble: Périphérie, Magnetic South in Charleston, South Carolina, and ensemble mise-en in New York. The four poems are taken from several collections of the Nobel Prize-winning Irish poet, and are not ostensibly related, although in my mind, I constructed a scenario linking them. The first, simply entitled Lightenings iv, takes as its point of departure the roar of a crowd in an ancient coliseum echoing through the large amphitheater. The second, The Rain Stick, describes (in very accurate detail) a most intriguing percussion instrument (though not one used to accompany the vocal setting of the text). The third song (Lightenings i) reflects on the frailty of the human condition and the fleeting nature of life; the last (Settings xxiv) is a beautiful panorama of a harbor in stillness.

"In my mind, I imagined all of these poems describing an ancient town overlooking the sea, with The Rain Stick and its accompanying dance providing entertainment for the crowd in the amphitheater. The work, set for an expanded Pierrot ensemble with soprano solo, may be re-imagined at a future time in a version for full orchestra. Its duration is approximately 8 minutes." LK

Described by The New Yorker as a composer of "fearless eloquence," Louis Karchin has been honored with performances of his music throughout the United States, Europe and the Far East. His Chamber Symphony was presented in August, 2011, on Tanglewood's Festival of Contemporary Music in Seiji Ozawa Hall (with the composer conducting), and his first opera, Romulus, released by Naxos Records in 2011, has garnered notable press attention internationally, with Opera News writing in a feature review, "It announces its originality right out of the gate...and sustains it through to the very end of its seventy-two-minute running time." Mr. Karchin is currently at work on a second opera.

The recipient of a John Simon Guggenheim Foundation Fellowship for 2011-12, Mr. Karchin was honored in May of 2012 with the inaugural Andrew Imbrie Award of the American Academy of Arts and Letters. He also has been recognized with awards from the Koussevitzky, Barlow, and Fromm Foundations, the American Academy's Goddard Lieberson and Walter N. Hinrichsen Awards, and National Endowment for the Arts Fellowships. His music is recorded on Naxos, New World, Albany and CRI labels, and is published by C. F. Peters Corporation and the American Composers Alliance. A frequent conductor of new music, Mr. Karchin co-founded the Orchestra of the League of Composers, and with them has conducted world or New York premieres by Elliott Carter, Arthur Kreiger, Missy Mazzoli, David Rakowski, and Shulamit Ran, among many others. He is Professor of Music at New York University.

Each of the four movements of Calder Cadences is inspired by a Calder structure: the first by "The Crab" (1962) which rests outside the Houston Museum of Fine Art, the second by "The Grand Sail" (1965) which stands on the campus of MIT in Boston, the third by the stabile "Lily of Force" (1945) which sold at auction in 2012 to a private dealer for $18.6 million, and the fourth by "Three Up, Three Down" which is located on the grounds of Atlanta's High Museum. In the short, fleeting opening movement, a rapid-fire flute demands the listener's attention. Formally, the arch-form movement is loosely palindromic, making it quasi "crab-like." The second movement takes on a brooding, ominous tone. Plodding pulses in the piano support more extroverted strains in the cello and bass clarinet. The third movement features placid sinewy lines similar to the wired structure of Calder's "Lily" stabile. The final movement functions almost as a mobile. Sharp accents in the piano are sustained and enlivened by the other members of the ensemble, and new shadows are cast with each turn of this musical mobile.

The compositions of Luke Dahn are heard throughout the United States and abroad, with recent performances given by groups such as the Moscow Conservatory Studio for New Music, the NODUS Ensemble, the NEXTET Ensemble, Composers Inc., the University of Iowa Center for New Music and the violin/piano duo Wolfgang David and David Gompper. Venues have included Rachmaninoff Hall (Moscow), the Estonia Academy of Music (Tallinn), the Frankfurter KuenstlerKlub, Harvard University's Memorial Church, the Miami ISCM Festival Series and the N.E.O.N. (Nevada Encounters of New Music) Festival at which he was recently awarded the Max Di Julio Prize. His music has been described as being "superbly concise" (Fanfare Magazine) and "terrific...awfully good" (Sequenza21). Several other of Dahn's works are available on the Albany label.

Dahn is also a dedicated educator having recently been named the 2011 recipient of the Northwestern College Teaching Excellence Award. He currently serves both as Assistant Professor of music theory & composition at Northwestern and as chair of the music department. Dahn earned degrees from the University of Iowa, Western Michigan University, and Houston Baptist University. His primary teachers have included David Gompper, C. Curtis-Smith and Ann K. Gebuhr.

is based on an American Hopi Indian tune of the same name (recorded in the 1950s on Canyon Records CR-7053), and consists of two parts: the first as a preparation although aesthetically removed but motivically based on the second part, a more straightforward rendition of the tune itself. The idea was to suggest an experience, as a non-native American, witnessing an Indian dance, outside, in a semi-circle, at dusk. For only with time and patience does one find they enter into the dynamic and rhythmic pacing of the celebratory dance.

The composition was premiered in Moscow on 24 April 2001 in Rachmaninoff Hall at the Moscow Conservatory of Music by the ensemble Studio New Music, Vladimir Tarnopolski, director

David Gompper has lived and worked professionally as a pianist, a conductor, and a composer in New York, San Diego, London, Nigeria, Michigan, Texas and Iowa. He studied at the Royal College of Music in London with Jeremy Dale Roberts, Humphrey Searle and Phyllis Sellick. After teaching in Nigeria, he received his doctorate at the University of Michigan, taught at the University of Texas, Arlington, and since 1991 has been Professor of Composition and Director of the Center for New Music at the University of Iowa. In 2002 - 2003 Gompper was in Russia as a Fulbright Scholar, teaching, performing and conducting at the Moscow Conservatory. In 2009 he received an Academy Award from the American Academy of Arts and Letters in New York City.

Gompper's compositions have been performed in such venues as Carnegie and Merkin Halls (New York), Wigmore Hall (London), Konzerthaus (Vienna) and the Bolshoi Hall (Moscow). Wolfgang David and the Royal Philharmonic Orchestra recently recorded his Violin Concerto for a Naxos CD. His song cycle The Animals, based on the poetry of Marvin Bell, was released on an Albany disc last June, and his Double Concerto for violin, cello and orchestra was premiered in March 2013.

is the chamber version of the first movement of my piano concerto. Based on the Barnett Newman painting of the same name, the work explores the abstract expressionist idea that the thin red line, the sole subject of the artwork, can embody a concentrated environment representative of the different states of being associated with the word wild: "not domesticated or refined; in an uncontrollable manner; in a natural state." Each is represented musically.

Joseph Dangerfield has lived in Germany, Russia, Holland, and New York. He is the recipient of many awards and recognitions, including the Aaron Copland Award (2010), the Indianapolis Chamber Orchestra's Composition Prize (2010), the Henry and Parker Pelzer Prize for Excellence in Composition (2005), the Young and Emerging Composers Award (2002), and ASCAP Standard Awards. He was a Fulbright Scholar to the Russian Federation and the Netherlands (2009-10), where he served as composer-in-residence with the Ensemble Studio New Music at the famed Moscow Conservatory, and lectured at Maastricht Conservatorium. He has been a resident in the Leighton Studios of the prestigious Banff Centre in Alberta, Canada, and the Yaddo Colony in New York. Recordings of his works are available on the Albany Records label, and many are published by European American Music and PIP Press Music Publications. His compositions have been performed throughout the United States, Europe, and Asia.

Originally trained as a pianist, Dangerfield is active as a performer and conductor throughout the United States. He has conducted various concerts (chamber and orchestral) of music, both new and from the canon in New York, Vienna, Prague, and others. For more information, please visit: www.josephdangerfield.com .