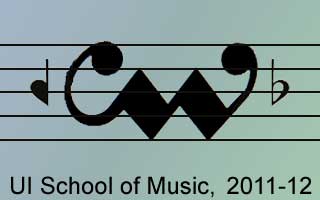 is a line from the Fin Amour ballade Adieu Vous Di, commonly attributed to Solage. The line is thanking Fortune for allowing the protagonist an hour to remember things as he wanted as opposed to the way they happened. Seizing upon this imagery, I wanted to create a version of the same ballade, remembered incorrectly. The melodic material is all derived from the harmonic series of the original three parts. The electronics are a mixture of the original ballade (as performed by the Gothic Voices) and processed bassoon samples.

is my latest electroacoustic composition. The work incorporates a wide variety of sonic material; however, most of the sounds are firearm-related in some way. Hence the title—Recoil.

Shane Hoose is a graduate of Bowling Green State University (MM) and Ball State University (BM) and is currently pursuing a doctorate in composition at the University of Iowa. Recently, he was a finalist in the Music Teacher's National Association (MTNA) Composition Competition. He composes in both the acoustic and electroacoustic media. He is currently an adjunct instructor of music at Kirkwood Community College in Cedar Rapids, Iowa. His mentors in composition include Lawrence Fritts, David Gompper, and Elainie Lillios.

is based on a poem of Vergil. It endeavors to capture the feelings of the poem, a dialogue to Romans.

Jason Gregory is a Master's student in Music Composition, and a graduate assistant in music for the University of Iowa's dance department.

A Copenhagen Wheel is a "smart" attachment for the rear bicycle wheel that stores the energy created when pedaling and braking the bicycle. This energy can then be harnessed to give the bicycle an extra boost of energy when pedaling up a hill or whenever the rider needs a little extra help around town. Data from the Copenhagen Wheel is sent to your smart phone that includes distance, speed, calories burned and a number of other bits of information. This type of technology is far distant from the days of taping playing cards to the frame of a bicycle in order to get just a bit of sound as you rode around town. The ideas for Copenhagen Wheel come from the thought that our basic technologies found just a few decades ago have tremendously changed into objects that are implemented into our everyday lives. The transition from creating just a few sounds from a bicycle's spokes to a bicycle giving us real information is expressed in the choice of cardboard boxes and live electronics. Cardboard boxes are also used to represent the basics of our technology while the electronics that are manipulated in real-time represent the immersion of technology into simple, everyday objects.

Zach Zubow's compositions have been featured on numerous new music conferences and festivals throughout the United States and abroad. Zach was named regional winner in the 2011 SCI/ASCAP Student Composition Commission Award for his string quartet, "Sundown", which has also won the 2012 College Music Society Mid-Atlantic Composition Award. He was also the 2011 first prize recipient for the Five College Composition Competition hosted by the University of Massachusetts for his alto saxophone and percussion duo, "Rounded Angles" and first prize winner of the 2012 College Music Society Southern Region's Composition Competition for his piece for found percussion titled "Hiking the Cascade Creek Trail". As well as composing, Zach has presented his research regarding beat class transformations in Ligeti's Étude No. 4, "Fanfares", from Ligeti's first book of études that will be published in the online journal, Proceedings, for the New Music Festival at the University of Central Missouri. A new CD of works produced by ABLAZE Records titled "Millennial Masters Series" was released in October 2011 that features "Nebulae" for flute and tape performed by Dr. Rebecca Ashe. Zach has received degrees from Luther College, Illinois State University and is now pursuing a PhD in music composition at The University of Iowa. For more information please visit www.zachzubow.com.