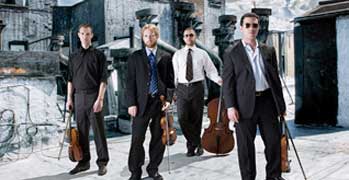 The members of the quartet met while attending the Eastman School of Music, and they have since studied with the Arditti Quartet, Kronos Quartet, Muir String Quartet, and members of the Ensemble Intercontemporain.

Dig Deep is the third of my string quartets. It is incessant and crazy driven. I wrote it at a time of personal struggle, tearing through the material to get to a deeper place of understanding. The music wrestles with itself - the bows dig deep into the strings for a thick reedy sound. Dense chords are cut up with frenzied tunes that sing at hyper speed. The quartet is united and fractured - unified in odd metered attacks in an off beat pulse, interrupted by frenetic counterpoint - everyone playing together and not together. The tunes interrupt and lengthen. While there is a clear tie to blues riffs, by the end the harmony becomes almost Brahmsian in always leading somewhere but never landing. But it's messier. Dig Deep was written in a series of my obsessive breathless pieces, and perhaps it is the most extreme of them all. Its virtuosity lies not only in the speed of the notes, but also in endurance and concentration. Dig Deep was commissioned by the Kronos Quartet with generous support from Nora Norden. ~Julie Wolfe

The opening inscription of Salvatore Sciarrino's String Quartet No. 7 reads "si deve trattare questo recitativo con semplicita penetrante," which roughly translated means "this recitative must be executed with penetrating simplicity." It is not surprising that Sciarrino refers to the work as a recitative, considering his obsession with the human voice is a constant thread uniting his rather prolific output. In its notation however the composition is far from simple, it being the job of the performers to make it seem as such against many obstacles the composer has placed in their way. The work opens with a unison gesture comprising two downward glissandi and an intervening ornamental figure, made rather difficult with the added stipulation that each instrument plays the figure in an awkwardly high position on a lower string than is necessary. The character marking for the entire piece "ampiamente chiamando," translated as "widely summoning," indicates that this figure represents a spiritual invocation, perhaps a magical ritual or religious ceremony. This figure is fragmented, transformed, and reconstructed over the course of the work. The glissandi become stretched out, in both time and pitch-space, sometimes appearing as harmonic glissandi. Also they are often truncated, executed fortissimo with an immediate decrescendo followed by intervals of powerful silence, or repeated with increasing or decreasing intensity. Many of these transformed gestures are executed as unisons between pairs of instruments, sometimes gradually bifurcating to become narrow intervals. A second figuration that surfaces throughout involves tiny swells appearing from and disappearing into nothingness, realized through a variety of techniques including tremolo behind the bridge, harmonic glissandi, and extreme sul pont. Also the element of ornamentation becomes increasingly elaborate as the piece develops, ranging from precisely notated dotted 32nd and 64th note patterns to actual grace notes. A quality of energy lurking just beneath the surface pervades the work, marked by indications such as "falsa posiz." (arco or pizzicati to be executed as harmonics that are not actually situated on harmonic nodes) and "afono" ("hoarse" sounds to be executed in high positions on low strings.) All these elements that seem to contradict one another as well as to deliberately inhibit the clarity of their own execution may be interpreted as aspects of this aforementioned wide summoning taking place. They speak of energies or spirits whose messages are marked by extreme urgency, but in their translation from one plane of existence to another become highly distorted. Perhaps the content of these messages is lost, but their form survives, piercing the silence with their pleas before returning back into the void. ~ Kevin McFarland

The String Quartet in three movements, was commissioned by the Harvard Musical Association in 2002, the same year the Association commissioned Gunther Schuller's Quodlibet for oboe, violin, cello, harp & French horn. It was premiered by the Arditti Quartet on the Great Quartets Series at Kresge Auditorium, at the Massachusetts Institute of Technology on January 24, 2003.

The first movement is driving and rhythmically propulsive. The second movement is lyrically delicate and contrapuntal, and the third movement, starting with a "textured" tutti, visits areas of extreme registration and thick layering, yet returns to the tutti at various points, each time more intense than the last.

Keith Powers of the Boston Herald wrote of the work "...the second movement marked important textural ground, with sparse, tense and spirited writing. The finale broke at the end like surf hitting the sand, positively infectious" and Richard Buell of the Boston Globe wrote in his review "There was also the way that out of an abstract, "modern" sort of play with sound material, an unmistakable lyric intensity would want to emerge — and would actually do so. A fine piece all in all, and worthy of the Arditti's attention."

Reigen seliger Geister — perception play: tones 'grasped out of the air,' 'air' grasped out of the tones. Following the adventure in my first string quartet Gran Torso with extraterritorial ways of playing the instrument — now long since developed by others in touristic fashion — here the reappropriation of interval constellations ('text') as 'facade,' as 'pretext,' so that their realization will enable the natural acoustic edges of the produced tones their timbral articulation, their muting, how they fade, how the vibrating strings are stopped (for example, also altering the noise component by sliding the bow between the bridge and the fingerboard) — to create, through the 'dead' tone-structure, a reborn object of experience. Thus, action fields determined by playing techniques are stages, transformed, shifted, abandoned, combined. The pianissimo as space for a manifold fortissimo possibile of the suppressed in-between values: figures that a sliding bowstroke makes vanish or arise within toneless murmuring, the pizzicatomixture that, despite its fugitive fading, can still be prematurely damped in part, 'filtered.' — Helmut Lachenmann