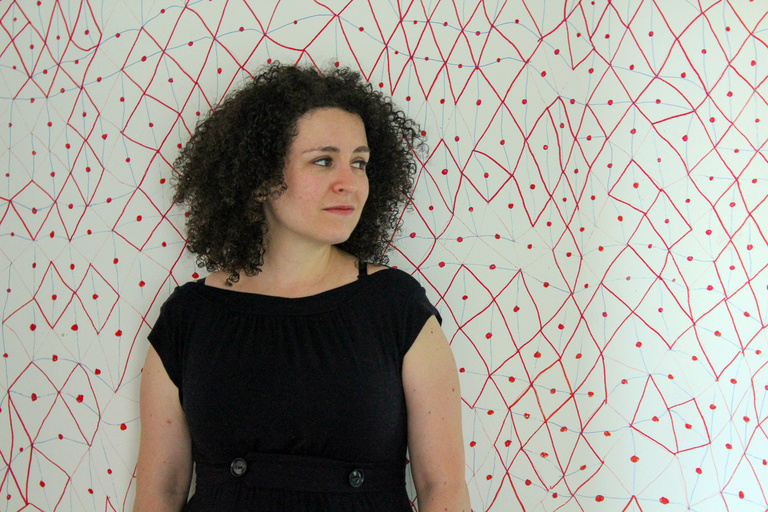 Osnat Netzer /osˈnat ˈnɛtsɛʁ/ is a composer, performer and educator. Osnat creates her compositions collaboratively, tailoring her work to the performer’s sensibilities, physicality and improvisational inclinations. She takes inspiration from cognitive linguistics, and in dialogue with the embodied experience of physical forces, such as potential and kinetic energy, resulting in compositions that are rich in musical languages and connected to the fulsome pursuit for tension and relaxation.

Born in Haifa, Israel, Netzer studied composition and piano at the Jerusalem Academy of Music and Dance, where her primary composition teacher was Menachem Zur. She came to the United States in 2003 for graduate studies in composition with Robert Cuckson at Mannes School of Music and continued her studies with Lee Hyla at New England Conservatory, where she earned her doctorate in 2011. In 2019, she joined the faculty of DePaul University as Assistant Professor of Composition and Musicianship.

Her opera, The Wondrous Woman Within, was described as “riotously funny” in The New York Times when its first scene was performed at New York City Opera’s VOX festival in 2012 and “challenging and fascinating” by critic Amir Kidron when it received its World Premiere in a sold out run at Tel Aviv’s Cameri Theatre in 2015.

As a pianist and performer, she regularly plays and conducts new music by fellow composers, as well as her own songs and compositions. Also a committed and passionate educator, Netzer teaches at The Walden School and has served on the faculties of New England Conservatory, Longy School of Music of Bard College and Harvard University.

They bury their dead with great ululations (2018) refers to the ancient custom of hiring women to cry loudly and pull their hair at funerals. The main purpose of this custom is to inspire people to cry and outwardly mourn for loved ones, to forgo the perceived embarrassment of crying in public. Art provides the same service. It allows us to connect to a feeling that is already there but that we struggle to express. Art can serve as a conscience for the ills of society, but its existence also proves that there is hope for a better world.

Ululation is a cry of mourning and it is also a cry of joy. That the same sound can express such contradicting states is indicative of our strong emotional affinity to sound itself and to its ability to purge us of overwhelming emotions and to provide cathartic relief. In my piece I use sound in a similar way - the sheer joy of Sound is to me an expression of deep grief and deep exhilaration, and the piece is meant to evoke both, or to keep the listener wondering whether it is expressing one or the other. Can it express both at once? Can art inspire in us the courage to cry out in times of injustice and ignorance?

Pang Spindle (2012) is a piece of many narratives, woven together. The first is the narrative of an anarchist society where every person is struggling to be heard, then emerging and becoming a diverse society where every voice is heard, where every individual fits within the larger tapestry as a discernible thread. It is perhaps an act of wishful thinking, and is inspired by the life and work of activist Ayaan Hirsi Ali.

Another narrative is my own exploration of groove as a basic human need in music. Even through the most complex textures and intense moments that the piece contains, there is always a presence of “groove”, a beat that we can adjust our body to, perhaps a physical compass. In this second narrative, hip hop is a strong influence, and the spindle becomes the needle of the record player.

Lastly, this piece spins out the emotional story of pain and suffering, and the attempts to arrive at a place of peace and reconciliation in a volatile emotional environment. Pang, or pain is spun by a spindle, and any attempt to demolish it is futile. One must wait for the thread to become so thin, that one can no longer weave a fabric of anger and suffering from it anymore. 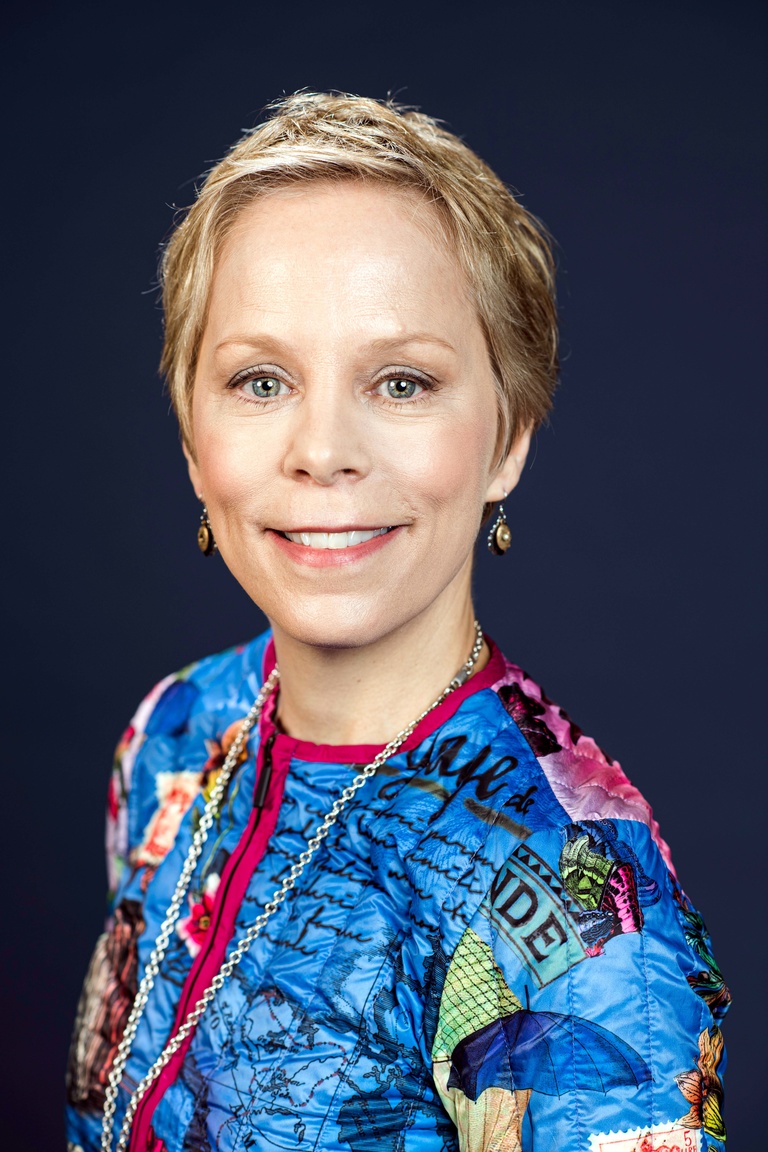 The music of Augusta Read Thomas (b. 1964 in New York) is nuanced, majestic, elegant, capricious, lyrical, and colorful — "it is boldly considered music that celebrates the sound of the instruments and reaffirms the vitality of orchestral music" (Philadelphia Inquirer).

A composer featured on a Grammy winning CD by Chanticleer and Pulitzer Prize finalist, Thomas’ impressive body of works “embodies unbridled passion and fierce poetry” (American Academy of Arts and Letters). The New Yorker magazine called her "a true virtuoso composer." Championed by such luminaries as Barenboim, Rostropovich, Boulez, Eschenbach, Salonen, Maazel, Ozawa, and Knussen, she rose early to the top of her profession. The American Academy of Arts and Letters described Thomas as “one of the most recognizable and widely loved figures in American Music."

She is a University Professor of Composition in Music and the College at The University of Chicago. Thomas was the longest-serving Mead Composer-in-Residence with the Chicago Symphony Orchestra for conductors Daniel Barenboim and Pierre Boulez (1997-2006). This residency culminated in the premiere of Astral Canticle, one of two finalists for the 2007 Pulitzer Prize in Music. During her residency, Thomas not only premiered nine commissioned orchestral works, but was also central in establishing the thriving MusicNOW series, through which she commissioned and programmed the work of many living composers. For the 2017-2018 concert season, Thomas was the Composer-in-Residence with the Eugene Symphony Orchestra, while Francesco Lecce-Chong served as Music Director and Scott Freck as Executive Director. Thomas was MUSICALIVE Composer-in-Residence with the New Haven Symphony, a national residency program of The League of American Orchestras and Meet the Composer.

In 2016, Augusta Read Thomas founded the University of Chicago’s Center for Contemporary Composition, which is a dynamic, collaborative, and interdisciplinary environment for the creation, performance and study of new music and for the advancement of the careers of emerging and established composers, performers, and scholars. Distinguished by its formation within an uncompromising, relentlessly searching, and ceaselessly innovative scholarly environment, which celebrates excellence and presents new possibilities for intellectual dialogue, the Center comprises ten integrated entities: annual concert series featuring the Grossman Ensemble, CHIME, visiting ensembles, distinguished guest composers, performances, recordings, research, student-led projects, workshops and postdoctoral fellowships.

Not only is Thomas one of the most active composers in the world, but she is a long-standing, exemplary citizen with an extensive history of being deeply committed to her community. She is the former Chairperson for the American Music Center; Vice President for Music, The American Academy of Arts and Letters; and Member of the Conseil Musical de la Foundation Prince Pierre de Monaco.

In February 2015, music critic Edward Reichel wrote, "Augusta Read Thomas has secured for herself a permanent place in the pantheon of American composers of the 20th and 21st centuries. She is without question one of the best and most important composers that this country has today. Her music has substance and depth and a sense of purpose. She has a lot to say and she knows how to say it — and say it in a way that is intelligent yet appealing and sophisticated."

Thomas has the distinction of having her work performed more frequently in 2013-2014 than any other living ASCAP composer, according to statistics from the performing rights organization (New York Times). Her discography includes 88 commercially recorded CDs.

“Bebop or bop is a style of jazz developed in the early to mid-1940s in the United States, which features compositions characterized by a fast tempo, complex chord progressions with rapid chord changes and numerous changes of key, instrumental virtuosity, and improvisation based on a combination of harmonic structure, the use of scales and occasional references to the melody.

Bebop developed as the younger generation of jazz musicians expanded the creative possibilities of jazz beyond the popular, dance-oriented swing style with a new "musician's music" that demanded close listening and enabled the musicians to play at fast tempos. Bebop musicians explored advanced harmonies, complex syncopation, altered chords, extended chords, chord substitutions, asymmetrical phrasing, and intricate melodies. Whereas the key ensemble of the swing era was the big band of up to fourteen pieces playing in an ensemble-based style, the classic bebop group was a small combo.” [From: Wikipedia]

Bebop Riddle, for expert marimba soloist, is virtuosic, playful, dance-like, nuanced, and nimble. A bit like Stravinsky and Bartok crossed with Bebop, with an occasional hint of a Big-Band-like brass fill, the composition unfolds chains, links, collisions, alterations, and deviations. Like an engine with several different kinds of motors, wheels and cogs, the music churns and hops along at a fast tempo, unfurling a chain-link of transformations, variations and outgrowths. Musical connections are orbital; sounds cross-fertilize and establish relationships which, in turn, create new intersections, amalgams, and fulcrum points. The spirit of this work is that no two chords, motives, lines, phrases, rhythms are exactly the same. Everything is transforming - everything is an amalgam.

“Music for me is an embrace of the world – a way to open myself up to being alive in the world in my body, in my sounds, and in my mind.”  — Augusta Read Thomas

The word "mobile" denotes both the noun (a decorative structure that is suspended so as to turn freely in the air) as well as the adjective (lively, sprightly, spry, energetic, vigorous; animated, traveling, flexible, versatile, changing, fluid, and on the move). On this mobile, three circa 4-minute dances are hanging. Between them are moments floating in the air until the suspended mobile is activated and set into motion. To be performed with dancers when feasible. Dance Mobile is a spin-off of material Augusta developed in her much longer ballet. Commissioned by the Howard Hanson Institute for American Music in celebration of the 100th Anniversary of the Eastman School of Music. Dedicated with admiration and gratitude to Brad Lubman, Musica Nova and the Eastman School of Music. 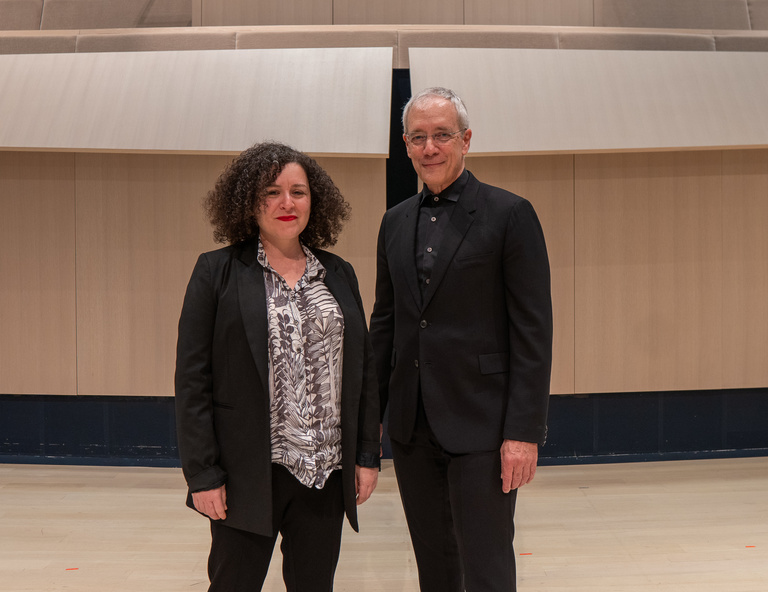 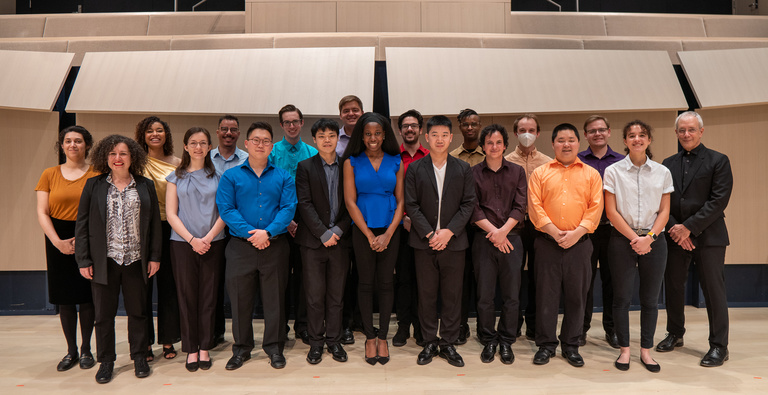