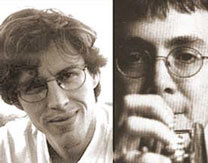 Duo Contour was formed following the performers' participation in the Darmstadt International Summer Course for New Music in 1998 with the primary aim of promoting music by living composers. In order to achieve a "new sound" they like to work with a composer during the preparation, learning, and performance of each piece. The ideal result being an interdependence between percussion and trumpet. These relationships translate directly into their improvisations in which they explore the possibilities of combining their instruments with other art disciplines (electronics, visual art, theatre, and dance).

Stephen Altoft is dedicated to the creation and performance of new repertoire for the trumpet. He plays with the Cornelius Cardew Ensemble and has collaborated with Golem Theatre. He has recently returned from a residency in Berlin, supported by the Music Sound Foundation, where he worked closely with German composers and performers, and studied with William Forman of Ensemble Modern. He holds a Master of Arts degree from the University of Huddersfield and is a recipient of the Ricordi Prize for Contemporary Performance. In 1996 and 1998 he was awarded scholarships to participate at the Darmstadt International Summer School for New Music, where he studied with Michael Svoboda and Markus Stockhausen, with whom he has since undertaken further private study. For two years Stephen ran the new music ensemble yon and also established the Composers' Exchange project in the north of England. He has participated in educational projects at schools in West Yorkshire and given numerous contemporary trumpet workshops.

Lee Ferguson lives in Freiburg working as a teacher and freelance percussionist and is a member of the Freiburg based new music ensemble, Suono Mobile. He has played with Ensemble Recherche, Surplus, the Basel Symphony Orchestra, Furstenberg baroque ensemble (of which he is a founding member), as well as performing solo concerts. Lee is particularly interested in promoting American contemporary music in Europe and is an organizing member of a new music ensemble which is dedicated to this cause.

Lee Ferguson was born in Grinnell, Iowa, USA. After studying as a scholarship student at the University of Iowa under Thomas L. Davis, Lee obtained a Fulbright Grant to study with Bernhard Wulff at the Staatliche Hochschule für Musik in Freiburg, Germany. During his time at Freiburg, he was a member of the Freiburg Percussion ensemble which recieved first prize in the German Music School Competition for the category New Music in Leipzig.

Christopher Fox writes music which defies ready categorisation and has, as a result, been variously described as 'complex', 'minimal', 'senile' and 'like a steamroller'. His work habitually oversteps the boundaries of conventional concert media and as well as the radio pieces includes gallery installations in collaboration with video artists and printmakers and a 'musical box' made with the poet Ian Duhig. Paul Griffiths, writing in the Times, has said of Fox's work that 'he takes simple ideas but he makes them sound quite wonderful'.

Each of the four trumpet pieces are based around a small group of notes, sometimes revolving, almost cycling around a particular pitch centre or intervals, and other times resting on one pitch, inflecting it or colouring it with ornamentation or varied articulations. (Stephen Altoft)

Giacinto Scelsi had a keen interest in Eastern European music. Having recently returned from performing in Bulgaria where I experienced its folk music at first hand, it is easy to appreciate the influence it has had on Scelsi's music. The ornamental vocal line, the richness of tone colour, the inflections of pitch, and the meditative stillness I heard from the Bulgarians, could be said to be present in Scelsi's trumpet pieces. Yet, when used by him they are typically and uniquely Scelsi.

The title of this piece is a word play on the German word  Haut (skin, or in this case the skin of a drum) and a similar German word  Hauen (to strike, a drum). The work is constructed in three Esercizios and three Rhapsodien. The six sections of this piece are proportionate to each other. The same proportions are also present in the rhythmic makeup (figures, meters, phrases). Behind the constriction of  only hand drums, lies a seemingly paradoxical intention. The listener is presented with timbral richness despite the reduced instrumentarium. (Igor Majcen)

Igor Majcen was born in Maribor, Sovenian in 1952. He studied music padagogy in Maribor, theory and composition in Ljublijana, and completed a Masters degree in Composition on the Staatlichen Hochschule für Musik in Freiburg, Germany. Mr. Majcen lives and works in Freiburg as a Composer, Music teacher, and Choir director.

Pulse was written in June 1998 for the Berlin-based American percussionist Robyn Schulkowsky (Univ. of Iowa alumni) and the trumpeter, Rheinhold Freidrich. Typically Wolff allows the performers certain freedoms of choice with regard to tempi, dynamics, timbre and instrumentation.

Listenings III is part of a cycle of five pieces for different combinations of solo instruments and duets. Whilst the pieces bear no relationship to one another, a conscious attempt is made to focus on specific timbres and pitches.

Bryn Harrison lives in the small penine town of Hebden Bridge. His music has been played widely in the UK and broadcast on Radio 3. Recent projects have included an  In Nomine for the German group, Ensemble Recherche, and a new piece for the London Sinfonietta. He enjoys collaboration and is currently working an a piece for the Ixion Ensemble based on a series of abstract paintings by Mike Walker.

Forza is divided into three main sections: solo percussion and tape, trumpet and tape with live electronics and then a short coda with percussion, trumpet and tape. The focus of the trumpet part is upon timbre as the performer plays a slow series of pitches which are derived from overtones contained with in the electronic sounds on the tape. Subtle use of live electronics is also used to alter the natural sound of the trumpet.

Similarly, the perccussion part contains rhythms which are influenced by the scraping and dragging noises on the tape. The musical result is an abstract expression of physical force (in section 1), and the force of human emotion (in section 2).

Ewan Stefani was born in 1971 and grew up in East Lothian, Scotland. After completing a music diploma course at Napier University in Edinburgh, he moved to Leeds to study electronic composition. Since 1995, Ewan has been teaching Music Technology at the University of Leeds while continuing his research into various aspects of computer music. He is an active member of the UK Sonic Arts Network and has enjoyed regular performances of his tape pieces and other works.

These five pieces are drawn from a larger set of short pieces that can be played in various combinations, depending on the available instruments and programme time. They are separated by silences of varied lengths. The title is a generic one; other performances of  Five pieces might not necessarily feature the same five pieces.

Oswald Spengler in his book  The Decline of the West (1922) set out the view that civilisations existed in life cycles, within which distinctions can be made between peoples before, within, and after a Culture. He named these people primitives, culture-peoples, and -- from its best known example, the Egyptians of post-Roman times -- fellah-peoples, or fellaheen.

The work's percussion and trumpet part have been written independently of one another. They are to be performed simultaneosly with the stipulation that they begin together and that the trumpet part ends shortly before the percussion part.

Tim Parkinson was born in 1973. He studied composition at Oxford with Robert Sherlaw Johnson and the with Kevin Volans in Dublin. He has written for the Ensemble Bash, Tubalate, and duo Contour, and has received performances in London, Cologne, Bonn, and Grahamstown, South Africa.