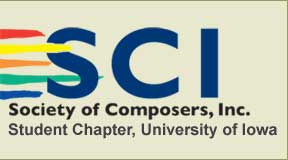 Slough
Josh MARQUEZ [BIO]
Andrew Gentzsch, violin
Through the process of degradation, Slough transforms into different states through changes in texture, articulation, character, etc... Transient emphasis and greater use of noise elements disintegrate the material, over time, in tandem with further destruction of the spectra. Timbre is the primary developmental element in Slough. The extreme contrasts, throughout, are representational of the chunky shedding that is associated with the word "slough".
Re-Convergence
Joseph NORMAN
Allison Offerman, oboe
Convergence is the tendency of two dissimilar objects in close proximity to developing similarities. Re-Convergence involves the integration, separation, and ultimate reconciliation of disparate sound objects/events. Their gradual disassociation and re-assemblage results in a brief drama that disseminates a rendering of sonic transformation.
Isochron
Jonah ELROD [BIO]
Angello Betina Carlos, Venezia Manuel and Tallis Strub
Dance & Choreography
The Earth has many different cycles only some of which we can experience in our own lifetimes. As our industrial activities grow in size and scope, more of these cycles are becoming influenced and changed by them. Isochron has many different lengths of related cycles juxtaposed and manipulated to represent these changes.
Straggle
Joungmin LEE [BIO]
Emily Duncan, flute
This piece is about people who want to get away from their daily life. An intense introduction, carried on by a section including multiple techniques, is representing individuals who want to escape from their reality. No one wants to give up; people are struggling in their own ways.
18-19/09/15
Carlos COTALLO SOLARES [BIO]
Korak Lertpibulchai, piano
on that particular morning...
Jacob SIMMONS [BIO]
Autumn Eckman, Jesse Factor, Dance & Choreography
Marina Ross, visual artist (video)
on that particular morning... is a brief exploration of texture, harmony, and special awareness. It points towards the space in between memories, and a retrospective awareness of the unknown or unforeseen.
Passacaglia(year)
Jared HEDGES [BIO]
Bo Atlas, tuba
While I knew of countless great passacaglias written throughout music literature, prior to working on this piece I was not familiar with the wealth of pieces written for solo tuba, including works by Persichetti, Penderecki, and Malcolm Arnold. Typically in a passacaglia, a bass instrument such as the tuba is confined to reiterating the bass line. In my piece, I wanted to let the tuba explore within, around and even stray from the ostinato, while maintaining the essence of the form.
Nyktor
Alexandros SPYROU [BIO]
Anna Catherine Peterson, oboe
Joe Valenti, clarinet
Christine Burke, bass clarinet
Yi Chen, alto saxophone
Keegan Hockett, bassoon
"Those of you who wander in the night amid the streets, insouciant or pensive, in the spring, at the time of the Epitaph Lamentation, or around the happiest hours leading to the triumphant levitation which is about to become Easter, before the Easter bells are heard, and, even more, in the summer nights on the streets of dark London, on others wide or narrow, extending around the Moskva in Moscow, or on the streets of whitewashed Athens, in spear-conquered moments of sorrow, or in aphroessian moments of bliss, when windows and shutters gaping wide open to receive dew and myrrh, those of you who by night wander on the streets, blissful that you ejaculated, or unhappy that some woman didn't deign to accept you and didn't stand, a little if you notice, you will hear many, as many as in the rabble of the day is difficult to be heard." —Rough translation of an excerpt from Andreas Empeiriko’s Oktana
— Intermission —
The Wanderer
Jonathan WILSON [BIO]
Julia Wolfe, visual artist
The music for "The Wanderer" is rooted in the aimless direction of the harmony. As I created this piece, I thought about the weather and mood the day Friday, September 18 had cast upon me with its storms and cloudy dreariness. Many of the sounds that will be heard are abstractions of the weather encountered that day.
Paradox
Bernard SHORT [BIO]
Alex Widstrand, bassoon
The definition of a Paradox is, a statement or proposition that seems self-contradictory or absurd but in reality expresses a possible truth. To create this piece a world of contradiction was used to create order and form. The composer asked himself questions, and the answers created the form of the piece. But no one knows what inspired those answers from the subconscious. The inspiration for those answers were uncontrolled impulses, those uncontrolled impulses were used to created a very controlled environment upon which the form of the piece takes shape. Thus creating the Paradox of using contradiction to create order.
U26
Carlos TORO-TOBÓN [BIO]
Jose Barrientos, alto saxophone
Last Words to Agent Lee
Paul DUFFY [BIO]
Jeiran Hasan, flute
Hannah Kauffman, voice
Minuet-Allemande
Alex KANE [BIO]
on My Experiences with a Brother Who Has Autistic Traits but No Diagnosis
Gustavo Do Carmo, piano
My brother came into this world with developmental delays and similar cognitive issues. When he was a toddler, my parents brought him to the University of Iowa Children’s Hospital to have him tested for autism, but we found out, surprisingly, that he barely skirted diagnosis on the autism spectrum. Thus, we have had to experience his journey as one without a road map. As his older brother, I have had the joy of witnessing his growth over the years, and it is apparent to me that his condition is by no means a setback but instead an opportunity. This is my testimony to my beautiful relationship with my brother.
bite, break the skin
Christine BURKE [BIO]
Leonid Iogansen, violin
Three phrases that explore transitions of timbre.
Six
Leonid IOGANSEN [BIO]
Danielle Beeman, Erin Corcoran, Ashley Kostelnik, and Kristin Vasilakos
Dance & Choreography
A work for two iPhones and four dancers and lasts about 3-4 minutes.