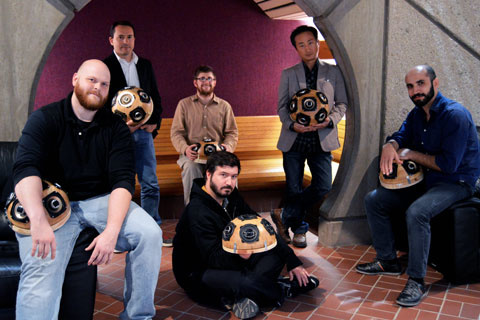 Dirty South Gamelan
Dirty South Gamelan is written for laptop orchestra. The composition investigates synchronization between members of the orchestra through the heavy emphasis upon metered rhythm.     As a musical work, Dirty South Gamelan draws freely from the unlikely pair of Indonesian Gamelan and Southern Rap (aka Dirty South). The result is not at all true to either source, however combines the musical impressions of both into a single amalgamation. 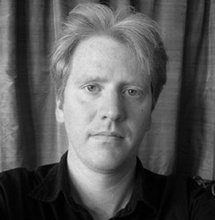 John Thompson works as Associate Professor of Music at Georgia Southern University where he serves as Director of the Music Technology program.
He has published articles in the Computer Music Journal and the International Journal of Human-Computer Studies. His compositions and research have been presented at the International Computer Music Conference, the New Instruments for Musical Expression conference, the Spark Festival of Electronic Music and Art, SEAMUS, SIGGRAPH, the Inter-Society for the Electronic Arts, ACM Multimedia Conference. His recent creative work explores cross-modal techniques for combining multiple media in generative and interactive contexts.

Title: Slow Set - Are you dancing'?
Up until the end of the 1980's - although not so much now - the phrase "Are you dancin' ?" would be heard in cheesy discotheques and dance halls throughout the land - there were't many real night clubs then either - as the local guys ask the local girls to dance during slow numbers. The music would already be playing softly and there would be a general hubbub as people frenetical searched for (or tried to avoid!) a potential partner. As couples swayed the non-swaying onlookers somewhat ignored the music and continued to chatter. When I made this piece something of the resulting sounds reminded me of this. Slow Set - Are you dancing'? - The opening line, is part 1 in a series of three pieces that utilize the similar materials in different manners. The sec on and third parts can be found at eoincallerysound.com

Eoin Callery is an Irish artist who among other things creates electro-acoustic chamber music, installations, and builds instruments using found materials. He holds a BMUS from University College Cork (2008), MA from Wesleyan University (2010), and is currently a Doctoral student at Stanford University. He is the concert coordinator at the Center for Computer Research in Music and Acoustic (CCRMA) at Stanford University. Information about his work and recent performances can be found at eoincallerysound.com

Kaleidoscope
Kaleidoscope is an electronic piece for laptop ensemble inspired by natural cycles, symmetry and John Whitney’s theory of digital harmony. The work consists of two contrasting sections that investigate different musical and visual patterns. The software for the piece consists of separate modules assigned to each performer that determine their specific role in the ensemble. Notes are generated offscreen by a performer controlling an array of spherical agents that “pluck” notes from 3D symmetrical structures. A second performer interactively visualizes notes as they are played, transforming them into particles moving in symmetrical patterns seen by the audience. A third performer controls musical parameters such as key, pitch range and scale mode, as well as various timings. This interactive design creates a flexible structure, in which specific musical events during each performance are never exactly the same, in spite of the fixed order of sections.

David Gordon is a M.A./Ph.D. student in Composition. While attending Pomona College from 2000-2004, he studied with pianist Genevieve Lee and composer Tom Flaherty. After earning his B.A., he continued composition studies with Bruce Reich in Los Angeles. From 2007-2010 he worked with Liviu Marinescu and Dan Hosken at California State University, Northridge, where he earned a M.M. in Composition. David’s music has been performed at the Brand Library in Glendale and other venues in the Los Angeles area. His interests include isorhythm, graphic notation and sound art.

Wherever We Are (2014)
Using textual and musical quotes from John Cage as points of departure, this piece puts the simple act of typing at the center of musical performance. For the audience, reading typed text projected on a screen becomes a playful puzzle accompanying the sonic experience. Wherever We Are was originally composed for SCLOrk, the Santa Clara Laptop Orchestra.

Critical Mass
This piece explores emergent phenomena within a networked group. It treats the ensemble as a collection of individual actors in a network where they are able to influence each other. Each member slowly narrows their "variance" from the pitch of the performer next to them until a generally uniform pitch or harmony emerges that can then be excited by a "conductor." These moments then last for as long as the group is in agreement or rather until someone begins to defect.

Scott Cazan is a Los Angeles based composer, performer, creative coder, and sound artist working in fields such as experimental electronic music, sound installation, chamber music, and software art where he explores cybernetics, aesthetic computing, and emergent forms resulting from human interactions with technology. His work often involves the use of feedback networks where misunderstanding and chaotic elements act as a catalyst for emergent forms in art and music. Scott is currently a faculty member at the California Institute of the Arts where he teaches topics on the intersections between art and electronics and his music is can be heard on Khalija Records and CareOf Editions.