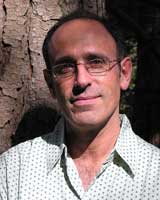 The music of American composer Josh Levine (b. 1959 in Oregon) has been commissioned and performed by prominent new music soloists and ensembles in venues ranging from IRCAM and the Cité de la Musique in Paris to Merkin Hall in New York, from festivals in Melbourne and Los Angeles to the World New Music Days in Stockholm. His tape piece, Tel, was awarded First Prize (1987) and a Euphonie d’0r (1992) at the Bourges International Electroacoustic Music Competition. Recordings of his works have been broadcast internationally and released on the harmonia mundi and New Focus labels.

Following classical guitar studies in Basle, Switzerland, Levine’s focus shifted to composition under the tutelage of Balz Trümpy. Further studies took him to the Paris Conservatory (1985-86 with Guy Reibel) and IRCAM. He worked for several years in Europe as a free-lance composer and guitarist in such noted new music ensembles as Contrechamps before earning his Ph.D. at the University of California, San Diego under the primary mentorship of Brian Ferneyhough. From 2000-08, he lectured in composition, electronic music, and music theory at San Francisco State University, and was subsequently appointed Assistant Professor of Composition at the Oberlin Conservatory of Music. He has also taught composition at UCSD and Stanford University, as composer-in-residence at the soundSCAPE festival in Italy, and in master classes across the U.S.