A retelling of the Greek mythological poem "Icarus"

In a retelling in modern mode of the classical Daedalue-Icarus myth, The Puzzle Master offers a sassy, penetrating look at our world's political performances and cultural calues. The characters include: Delling, a world-famous engineer-inventor; Ingram, his twelve-year-old son; and Caribes, a mixed chorus containing all other roles including Dellings nephew Thane, Queen Prue, King Milo, their daughter Princess Arabella, her lover Theodore, and the islanders themselves as commentators and comforters.

The Puzzle Master in an hour-long, abbreviated form had its premiere May 6 & 7 at Braindeis as the opening event of the 2007 Boston Cyberarts Festival and was warmly reviewed in the Boston Glove: "Reeve's modern libretto is eloquent and sly, and Chasalow, … who specializes in electro-acoustic music, has set the text with integrity, supple craft, and at times arresting beauty. Delling often sings in a kind of lyrical and expressive Sprechstimme and the writing for the 'chorus' ranges from a bracing style full o wide leaps to a very poignant madrigal-like setting spiked with pungent dissonances. For the passage where the chorus comforts Ingram's soul after he has fallen into the sea, Chasalow writes a kind of church-like music that sounds at once both ancient and very modern."

The setting is an imaginary island in the Caribbean where Delling (Daedalus) has ended up after a fantastic career. The Chorus begins by introducing him and his son Ingram (Icarus) and by reenacting the early episode with his nephew Thane for which Delling was accused of jealously pushing the young man off a cliff.

Scene by scene we then get reenactments of the crucial events in Delling's life starting with his fleeing the city with his son by hot-air balloon to King Milo's island. There Queen Prue lustily persuades him to invent a contraption whereby she can have sex with a bull (which she does). Milo compels him to build a maze for keeping the man-eating man-bull she bears. Delling is punished by being put into his own maze.

When Delling fits himself and his son with artful wings to fly out of the maze, the boy seeks to prove his general defiance of restrictions by outflying his father. Alas, he goes too close to the sun, his wings burn, and he plunges into the sea, where beautiful nymphs cradle his body and assuage his soul.

That brings us back to the present and Delling alone with his conscience on the island, his last stop. The Chorus summarizes his life while he ponders the significance of new information technology for future engineering projects and blames himself for the loss of the boy, who, like his father, "insisted on his immortal right to be free." 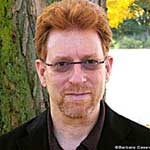 Eric Chasalow is the rare composer who is as comfortable with electro-acoustic music as he is with music for traditional ensembles. ARRAY, the journal of the International Computer Music Association, wrote that his 2003 CD Left to His Own Devices "clearly establishes him as one of the leaders of our times...offering a wondrous fusion between distinct styles and mediums...."

Chasalow's music has been embraced by performers throughout the world, with recent performances from Boston to Berlin and San Francisco to Seoul.

A member of the Brandeis University faculty since 1990, Chasalow directs the Brandeis Electro-Acoustic Music Studio. He produces the biennial BEAMS Electronic Music Marathon, on the Boston CyberArts Festival. Since 1996 he has curated The Video Archive of Electroacoustic Music, an oral history project chronicling the pioneer electronic music composers and engineers from 1950 to the present.

A product of the famed Columbia-Princeton Electronic Music Center, Chasalow studied composition with Mario Davidovsky and flute with Harvey Sollberger. He has been honored by the Guggenheim Foundation, National Endowment for the Arts, the Fromm Foundation at Harvard, the New York Foundation for the Arts, and the American Academy of Arts and Letters. 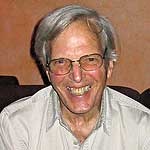 Professor Emeritus at Wesleyan University, F. D. Reeve is the author of ten volumes of poetry, seven books of fiction, three books of literary criticism, twelve books of translation, four libretti, and countless uncollected essays, articles, stories, poems, reviews, and translations. He is also the editor of a number of important anthologies, including After the Storm: American Poets on the Gulf War. When President Kennedy sent Robert Frost to Russia in 1962 to meet with Nikita Kruschchev as a kind of cultural ambassador, Reeve served as the great poet's personal translator, an experience Reeve recounts in his recently re-issued book entitled Robert Frost in Russia. Reeve has received numerous awards, including an award in literature from the American Academy of Arts and Letters and the Golden Rose Poetry Award. He also won an award from Wesleyan University for his passionate commitment to teaching. His work has appeared in all of the major journals and magazines: The New Yorker, Atlantic Monthly, The Nation, The New York Times Book Review, London Magazine, The Times Literary Supplement, The Hudson Review, American Poetry Review, Kenyon Review, Yale Review, Sewanee Review, and Poetry.

Joseph Dangerfield (b. 1977) has studied composition with Michael Golden, John Allemeier, Marilyn Shrude, and David Gompper. He earned a Ph.D. in composition from the University of Iowa, and is currently Assistant Professor of music composition and theory, as well as the director of orchestral activities at Coe College in Cedar Rapids, Iowa. Dangerfield's compositions are heard both nationally and internationally, and he is recipient of several awards. In addition, select compositions have appeared on the Albany Records label (The Waves Roll on, Thundering and Shimmering, Troy 882 and 956; and Dreams of Fin, Troy 937) while others are available through European American Music and PIP Press Music Publications.

Ann DuHamel, a DMA candidate in Piano Performance and Pedagogy at the University of Iowa, studies with Dr. Ksenia Nosikova. Prior to moving to Iowa, Ann taught piano and served as Assistant Artistic Director at the Central Minnesota Music School for eight years. She also taught as adjunct piano faculty at the College of St Benedict. This past summer, Ann performed in Bulgaria as part of the International Chamber Music Festival and Tour. Currently Ann teaches at the Preucil School of Music in Iowa City.

Soprano Karen Kanakis has successfully performed many major roles in her wide-ranging repertoire, including the title roles in Lucia di Lammermoor and La Traviata. "Her voice and her stage presence are a delight," wrote a critic of her performance as Sybil in the world premiere of Hans Schaeuble's Dorian Gray. In June of this year she made her Carnegie Hall debut in the Weill Recital Hall in a program of performing duos from the Luther College Music Faculty, where she teaches voice and opera.

A native of San Antonio, Texas, Jacob Lassetter's warm baritone voice and charismatic stage presence are increasingly in demand in both the operatic and concert repertoire. Dr. Lassetter holds degrees from Louisiana State University, The University of North Texas, and The University of Cincinnati College-Conservatory of Music. He currently serves on the voice faculty at Luther College.

John Christian Rommereim, Professor of Music at Grinnell College, is a composer, conductor, singer, and harpsichordist. He has composed choral/orchestral works, works for choir with various instruments, and works for voice and piano, guitar, flute, saxophone quartet, and string quartet. In its review of the 2006 premiere of "Into the Still Hollow" at Symphony Space, The New York Times praised the "richly expressive" character of Rommereim's vocal writing. Rommereim's choral works are published by Oxford University Press, Roger Dean Publishing, and earthsongs. During the 2008-09 season, he is composer in residence with the Rose Ensemble in the Twin Cities. Mr. Rommereim is also active as a vocal soloist, appearing in recitals and as a baritone soloist for choral/orchestral works such as Beethoven's Ninth Symphony, Brahms's German Requiem, Verdi's Requiem, and Orff's Carmina Burana.

Vivien Shotwell's operatic roles include the title role in Handel's Giulio Cesare and the Third Lady in Mozart's The Magic Flute. She has appeared as an alto soloist with the Grinnell College Community Chorus and the Chamber Singers of Iowa City.