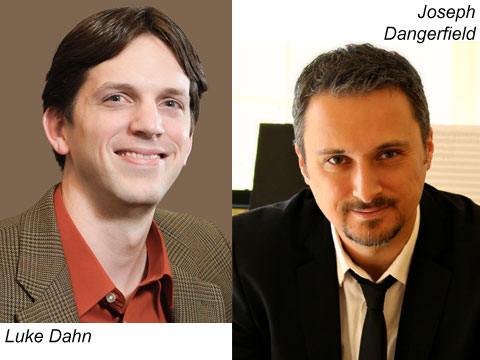 Schickstücke
The work, "for vibraphone alone," was composed for University of Iowa alumnus Steven Schick by former Center for New Music director William Hibbard. The two had been friends since Schick's time as a student. Hibbard set out to compose a truly unique vibraphone piece for Schick, which was to be premiered on the Center for New Music concert series for that season. In a personal letter to Schick following the first performance, Hibbard wrote, "I'm particularly proud of its fidelity to a concept, one which treats the vibe[raphone] as a vibraphone (like Chopin with the piano), such that the music is inconceivable on any other instrument." The piece uses small bits of chromatic material, introduced in the opening few measures, and expands on them throughout the work. Always quiet and often fast, the work moves through many different characters, each incorporating a different textural quality.

William Hibbard was appointed to the University of Iowa Music Composition faculty in 1966, and later served as the chair of the Theory and Composition area. In 1966, Hibbard and colleague Richard Hervig founded the Center for New Music, which quickly gained renown throughout the American contemporary music community. As a composer, Hibbard's awards were numerous. As a performer, he was the principal violist of the Quad City Symphony, and was the founding director of the Iowa City Community String Orchestra. Hibbard died of AIDS in 1989 at his home in San Francisco. Schickstücke is signed "Summer 1981, Iowa City/San Francisco."

Remnants (of time and space)
Composed in 2009 for Ryan Fogg, the work is a single‐form work containing seven movements that coalesce into two main parts. Each part signifies the spirit of two places the composer visited and lived in 2009: Moscow, Russia, and Lake Baikal, Siberia. The first two movements making up Part I of Remnants examine the concept of time as space and as movement. In the third movement, time, as it has been defined within the first two movements, is interrupted, and this interruption is aurally identifiable, as the descending closing gesture of the second movement becomes the springboard into the third movement. Part II explores the fluctuations and changes that occur as time morphs into space and eventually reaches its end. The ebb and flow of time, heard in the fourth and fifth movements, gives way to the blurred boundaries between time and space in the sixth movement. The concluding movement creates a static atmosphere as time runs out. Each movement of the piece was composed using a motivic segment, or “remnant,” contained within the first movement. This compositional technique represents a realization of the composer’s philosophy that every place leaves its mark upon those who live in or visit that place, just as travelers and residents leave their mark upon the places they encounter. – Carla Colletti

Two Vestiges
While living in Köln, Germany, I attended an exhibition of the artist Ursula Burghardt (1928 – 2008), who was the wife of composer Mauricio Kagel (1931 – 2008). She never considered herself an artist, and until her death in 2008, a mere two weeks after Kagel’s death, her works were virtually unknown. Near the end of her life, she became physically infirm and unable to make sculptures. Therefore, she began to draw three-dimensional works, which were in her mind as sculptures that she wanted to make, but could not. The first vestige, Ribbon Sculpture, was inspired by one of these drawings, and the melodic material is threaded through a series of sonorities, representative of the three-dimensional world in which she wanted to create.
I recently assisted in a series of recording sessions with the Luxembourg Philharmonie whereby they recorded three works by Japanese composer Toshio Hosokawa. The first, the Cello Concerto, contained three beautiful sonorities in its opening bars. I plucked these sonorities, and replanted them in my own sonic plot, and they serve as the basis of the first movement, Japanese Garden (karesansui).

Joseph Dangerfield has lived and worked professionally in Germany, Russia, Holland, Italy, and New York. He is the recipient of many awards and recognitions, including the Aaron Copland Award (2010), the Indianapolis Chamber Orchestra’s Composition Prize (2010), the Henry and Parker Pelzer Prize for Excellence in Composition (2005), the Young, and Emerging Composers Award (2002). He was a Fulbright Scholar to the Russian Federation and the Netherlands (2009-10), where he served as composer-in-residence with the Ensemble Studio New Music at the famed Moscow Conservatory, and lectured at Maastricht Conservatorium. He has been a resident in the Leighton Studios of the prestigious Banff Centre in Alberta, Canada, and the Yaddo Colony in New York. Recordings of his works are available on the Albany Records label, and many are published by European American Music and PIP Press Music Publications. Born in 1977, he began his composition studies at Marshall University (BFA 1999) with Michael Golden. He completed his master’s degree at Bowling Green State University in Ohio (MM 2002), working with Marilyn Shrude and Mikel Kuehn, and received a doctorate in 2005 from the University of Iowa (PhD 2005), following studies under David Gompper. He is currently on faculty at the University of Florida.

Threnody
The complete title of this piece is Threnody (for Naboth). As a Christian, this lament is a kind of personal exercise of both sympathy and faith – an expression of sympathy for the man Naboth who was murdered by King Ahab in order to appropriate the man’s prized vineyard, and an expression of faith in a God who cares deeply about justice. But the parentheses in the title indicates my desire that this piece serves as a lament of sympathy for any who have been the victims of injustice. Sadly, we have no shortage of opportunities for lament and no shortage of modern-day Naboths, whether we think of the Tamir Rices of this world, the Orlando Pulse nightclub victims, or the Charleston church massacre victims. Listeners are invited to lament as they see fit. Threnody is essentially a funeral march during which the Lutheran funeral chorale “Ich hab’ mein’ Sach’ Gott heimgestellt” (“I have left all that concerns me up to God”) appears at various moments, a chorale that makes a similar appearance in Bach’s funeral BWV 106 Actus Tragicus cantata.

Pentimenti
The word “pentimento” refers to a visible trace of an image previously painted on a canvas that shows through the surface image. A guiding principle in Pentimenti for large ensemble is the constant emerging of elements through the musical texture – timbral colors blend in a variety of ways, loud attacks give way to latent resonances, hidden melodies surface and recede. Formally, the piece is constructed in three conjoined sections. An opening marked initially by stark contrasts between loud tutti chords and pregnant silences becomes increasingly active rhythmically and texturally before leading to a slower middle section of timbrally-evolving chords, reminiscent of Schoenberg’s “Farben” from Five Orchestral Pieces. In the final section, the activity returns, bringing a recapitulation of the opening’s stark contrasts and thereby creating a kind of arch (ABCBA) formal structure.

The award-winning compositions of Luke Dahn are heard throughout the United States and abroad, with performances by groups such as the Moscow Conservatory Studio for New Music, the League of Composers/ISCM, Composers, Inc., the Detroit Chamber Winds & Strings, Boston Brass, the University of Iowa Center for New Music, the NODUS Ensemble, and by saxophonist Kenneth Tse. Venues have included Carnegie Hall, Rachmaninoff Hall (Moscow), the Estonia Academy of Music (Tallinn), the Frankfurter KuenstlerKlub, Harvard University’s Memorial Church, and the Miami ISCM Festival Series.
After serving for eight years at Northwestern College (Orange City, Iowa) as music professor and department chair, Dahn joined the music theory faculty at the University of Utah in 2015. As a theorist, he has done extensive research on the music of J.S. Bach, focusing particularly on the four-part chorales. In addition, he serves on the Board of Directors for the League of Composers/ISCM in New York and is co-founder and co-artistic director of Ensemble: Périphérie, which made its Carnegie Hall debut in October 2013. Dahn earned graduate degrees in music composition from the University of Iowa and Western Michigan University, and his principal teachers included David Gompper, C. Curtis-Smith, and Ann Gebuhr. For more information, please visit www.lukedahn.net.

Trio for Horn, Viola, and Harp
A dear friend of mine, who is an astonishing horn player, commissioned this Trio along with two of her colleagues. Although there were many registral issues to solve that are unique to this instrumentation, my focus was to maintain balance and clarity. One of the advantages of bringing together the horn, viola, and harp is that each possesses a uniquely warm quality, which I have sought to exploit. The themes and harmonic structures are drawn from the letters of the first names of each of the commissioning performers, and are consistent across all three movements. While not programmatic, each movement is titled in the attempt to capture the function or mood of that particular movement.

Zack Stanton is a composer and conductor from Conway, Arkansas. He has written for orchestra, wind ensemble, choir, and chamber ensembles of various sizes, and his work has been increasingly performed throughout the United States, as well as Ireland and South Korea.
Recent commissions have come from Jesse Cook (trumpet), Anne-Marie Cherry (horn), the University of Georgia Midfest Band Festival, and the Millikin University Percussion Ensemble. In the fall of 2015 pianist Paul Barnes released a recording, New Generations, which includes Zack's piano solo work, Scenic Route. In 2012 his Concerto for Piano and Wind Ensemble received Honorable Mention in the ASCAP/CBDNA Frederick Fennell Competition. During the 2011-2012 season, the Austin Symphony Orchestra premiered the orchestral version of Triple Venti Latté under music director Peter Bay.
Zack received his Doctor of Musical Arts in composition from the University of Texas at Austin. He is currently Lecturer of Composition and Theory at the University of Iowa. Prior to his appointment at the University of Iowa, Zack taught at Belmont University and the University of Texas at Austin.