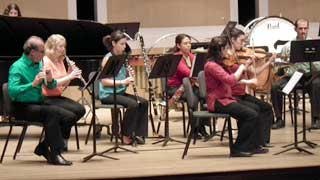 consists of 2 parts (the first dramatic, the second lyrical), connected by an unaccompanied hummed interlude. The work follows the phraseology of the dance by Jean Erdman with texts by e.e. cummings.

John Cage (1912-1992). American composer, was one of the leading figures of the postwar avant garde. The influence of his compositions, writings and personality has been felt by a wide range of composers around the world. He has had a greater impact on music in the 20th century than any other American composer.

Frigyes Hidas was born in Budapest in 1928. He studied composition at the Ferenc Liszt Academy of Music with János Visky. For fifteen years he was music director of the National Theatre (1951 - 1966) and between 1974 and 1979 he performed the same function at the municipal Operetta Theatre. Since leaving that institution, he has been a free-lance composer. Hidas is a highly prolific composer who firmly believes in tunes and harmonies in a traditional sense of those terms and always writes in an easily accessible idiom. His oeuvre covers the entire gamut of genres: opera's, ballets, concertos, orchestral, chamber, solo and choral music. He is particularly well known in the world for his woodwind and brass chamber music and for his works for wind-orchestra. Hidas has received an important number of commissions by Ballet Companies, the State Opera House, Radio stations, Universities and various musical societies.

was written for the group by the same name, Antares (clarinet, violin, 'cello, piano), through generous support from Jim and Ceci Tripp for Concert Artists Guild as a commission prize for the award-winning chamber group.

The work was designed to be a signature piece for the players, showcasing each individual musician in his/her own movement. The four personal movements comprise the central, work-proper, while the outer movements (both of which are titled Antares and consist of the same music) present the ensemble as a single entity. This Antares movement calls attention to the group's actual name—the name given to the super-giant star in the Scorpio constellation. The music here is celestial in nature, often evoking a cosmic sense, a feel of stellar beauty and stagnancy.

In the last fifteen years Carter Pann's music has become known for its blend of crafty, popular-sounding idioms, subtle and unabashed humor, and haunted melodic writing. His music has been performed around the world by such ensembles and soloists as the London Symphony, City of Birmingham Symphony, Berlin-Stockholm-Finnish Radio Symphonies, Seattle Symphony, Vancouver Symphony, National Repertory Orchestra, National Symphony of Ireland, New York Youth Symphony, Richard Stoltzman, the Ying Quartet, pianists Barry Snyder and Winston Choi, and the Antares ensemble, among others. Honors in composition include the K.Serocki Competition for his First Piano Concerto (premiered by the Polish Radio Symphony in Lutoslawski Hall, Warsaw 1998), the Charles Ives Scholarship from the Academy of Arts and Letters, and five ASCAP composer awards. His Piano Concerto was nominated for a GRAMMY as "Best Classical Composition of the Year" 2001. Carter's Clarinet Concerto Rags to Richard, commissioned for Richard Stoltzman, was recorded by the Seattle Symphony under Gerard Schwarz. Love Letters (string quartet no. 1) was commissioned by the Ying Quartet for their LIFE MUSIC commissioning project through a grant from the American Music Institute. His work SLALOM (for orch.) was performed by the London Symphony under Daniel Harding in 2001 and has since been widely performed throughout the United States and Europe (and subsequently showcased on NPR's Performance Today). CONCERTO LOGIC (Piano Concerto No. 2) was commissioned by a consortium of nearly two dozen wind symphonies around the country with the composer as soloist. His most recent work, MERCURY CONCERTO for flute and orchestra, was written for and premiered by fellow faculty member Christina Jennings and the River Oaks Chamber Orchestra in Houston. Throughout the last seven years Carter has contributed regularly to the explosion of new Wind Symphony works being written for the many ensembles around the country. He was the most featured composer at the recent Nationwide CBDNA conference in Austin, TX (2009).

He was all austerity and rage.
He was as mute as a fish.
He was music.
He viewed the world in the bright flame of the torch we light for the dead.
His joys were sometimes mysterious.
He was full of confusion.
Every day dawns but once.
—P. Quignard, Tous les matins du monde

Just as my fingers on these keys
Make music, so the self-same sounds
On my spirit make a music, too.

Music is feeling, then, not sound;
And thus it is that what I feel,
….
Is music.
—Wallace Stevens, "Peter Quince at the Clavier"

Late in March 2011, as I began conceptual work on this composition, it came to me that I wanted to try to take the highly subjective world of felt emotion and transmute it into the highly objective and disciplined world of music as organized sound. The impulse came both from whatever place composers' ideas come from and from my work, over the past several years, talking about the relationships between art, the artist, and aesthetic gesture from the standpoint of a working composer (the panels and workshops on creativity in which I've participated have been directed toward practicing psychotherapists). The result is a work of strong contrasts. I was most interested in dichotomies—stasis and chaos, the lyrical and the disjunct, extreme dissonance and extreme consonance—and in transformation and recombination of those materials. Eventually, the music fell into a loose three-part structure with an extended introduction.

The title Life Studies is borrowed from Robert Lowell's book of the same name.

Leslie A. Hogan received her principal training at the University of Kansas (BM 1987), and the University of Michigan (MM 1989, DMA 1992). Her music increasingly reflects a longtime fascination with other art forms and with the potential of music to reflect or respond to visual stimuli from the natural world. In 1999, she co-founded Current Sounds, a new music consortium based in Santa Barbara, California, and also serves on the board of the Chamber Music Society of Santa Barbara, an organization which promotes the performance and appreciation of chamber music repertory through sponsoring workshops, concerts, and outreach activities. She has received awards from the American Academy of Arts and Letters (Charles Ives Fellowship, 2002; Charles Ives Scholarship, 1993), the American Music Center, ASCAP, and the Chicago Civic Orchestra, among others. Prof. Hogan has taught composition in the College of Creative Studies at the University of California-Santa Barbara since 1995.