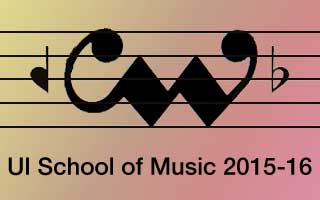 Bleached (2015)
Nima HAMIDI [BIO]
Matthew Laughlin, violoncello
According to Schwärzel and Müller in "Dynamic Memory Networks," people often think that memory operates like recording equipment, however it is not the case. Memories can be constructed by encoding them when they are being recalled. Bleached is illustrating the process of memorization. Two contrasted musical ideas referring to two psychological statuses are being transformed through time. After a certain point, distorted and dissolved concepts are being transformed into a neutral stage in order to accomplish a consolidation. To meet the aforementioned criteria, technically, the piece contains unstable timbral quality, which is also referring to some eastern musical elements, aesthetically and aurally. This is all amplified by unique ornamentation and pitch material throughout the piece
Urban Sky Glow (2016)
Jonah ELROD [BIO]
Shelby Tracy, marimba
Jonah Elrod, live electronics
The use of too much artificial light causes us to miss out on the many stars of our night sky. Urban Sky Glow explores how our celestial friends go missing from our lives as city lights become brighter. It acts as an interpretation of the levels of the starlight magnitude of one particular area of the night sky. The marimba musically represents the stars that are visible in the different magnitudes. As we move through the levels of magnitude, city light is reduced, more stars are revealed, and previously visible stars become brighter. The live electronics create both a contrasting artificial light as well as extensions of the marimba's starlight. As we travel through the magnitudes we also engage in two dreams, which are variations on the starlight materials.
Visual Field (2015)
Christine BURKE [BIO]
Christine Burke, bass clarinet
The "visual field" refers to the total area in which objects can be seen in the side vision as you focus your eyes on a single point. When staring at a fixed object, one may experience subtle (real or imagined) manipulations along their periphery; light fading in, out, or flickering; movement, change of color, etc. In "Visual Field", sounds from the bass clarinet are manipulated in an attempt to imitate this phenomenon.
Metamorphosis (2016)
Bernard SHORT [BIO]
Emily Duncan, flute
Metamorphosis, the second of a three movement work for flute and live electronics, focuses on the creation and deconstruction of a melody created from a recording of the poem "A Jelly-Fish" by Marianne Moore. Once recorded, the audio file was stripped down to isolate all hidden tones found within and between each spoken word. Once sequestered, those phonemes were used to help create the main melody of the piece, which was analyzed and rebuilt, creating a free flowing texture that elides into a hocket-like texture.
"A Jelly-Fish" Marianne Moore

Visible, invisible,
A fluctuating charm,
An amber-colored amethyst
Inhabits it; your arm
Approaches, and
It opens and
It closes;
You have meant
To catch it,
And it shrivels;
You abandon
Your intent—
It opens, and it
Closes and you
Reach for it—
The blue
Surrounding it
Grows cloudy, and
It floats away
From you.
To take the ear strangely (2016)
Jared HEDGES [BIO]
Two Characters from The Tempest
Christine Burke, clarinet
Nick Bowes, double bass
Shakespeare's late masterpiece, The Tempest was written just over four hundred years ago, and in the intervening centuries, countless composers have explored the play's setting of an isle "full of noises." My piece imagines two of the island's natives: Ariel ("an airy spirit") and Caliban ("a savage and deformed slave"). I was intrigued by Shakespeare's juxtaposition of the two, who both serve—with differing degrees of willingness—the artist-magician Prospero. Among other parallels, both Ariel and Caliban sing strikingly different songs throughout the play.
Metagenesis
Joseph NORMAN [BIO]
Emily Duncan, flute
Christine Burke, clarinet
Korak Lertpibulchai, piano
Leo Perez, violin
Matthew Laughlin, violoncello
Nima Hamidi, conductor
Metagenesis is a cycle of reproduction that alternates sexually and asexually. Within this piece, the title describes a process of disintegration and reintegration of heterogenous and homogeneous elements. A series of transformative states are juxtaposed as oppositions and affect a large-scale formal evolution. Extreme fragmentation, stabilization, and symmetry provide the basis for materials that are gradually synthesized. Musical features are extracted, inserted and fused, as the piece grows, recedes, and reconstructs itself.
Toward (2015
Joshua MARQUEZ [BIO]
I. Lilt
II. Devour
Emily Duncan, flute
Christine Burke, clarinet
Korak Lertpibulchai, piano
Andrew Gentzsch, violin
Matthew Laughlin, violoncello
Joshua Marquez, conductor
Moving toward new positions, plates collide. That which pollutes becomes nourishing. Fragments scatter into new forms. Monoliths crumble. Roots take. Toward is a five-movement cycle of destruction and rebirth. Through spectral distortion, material is collided, collapsed, expanded, shifted, convolved, and manipulated. Toward was created in collaboration with painter Dana O’Malley.