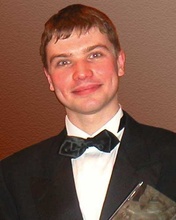 Organist, pianist and harpsichordist Constantin Volostnov, was born in Moscow in 1979. He began to study the organ at the age of 11 with Maria Potashnikova in the Prokofiev Music School. From 1994 to 1999 he studied in The Academic Music College of the Tchaikovsky Conservatory with Alexei Shmitov (organ and piano classes).

At present Constantin is attending a Postgraduate Course at the Moscow Conservatory, studying with Professor Natalia Gureeva and at the Hochschule fuer Musik in Stuttgart with Dr. Professor Ludger Lohmann.

Constantin is currently the artistic director of the Philharmonic society in the Caucasus Mineral Waters Region.

He has performed in concerts with Valery Polyansky (The Academic State Symphonic Chapel), Vladimir Minin (The Academic State Chamber Choir) and Kent Nagano (Russian National Orchestra). He performs recitals in Russia and abroad on a regular basis, has recorded a CD of Russian organ music, and has been featured as a soloist and ensemble member in many recordings for radio broadcast.