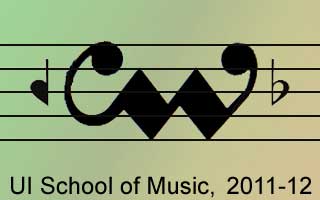 A Night at Iowa City for String Quartet

Inspired by the nightlife of Iowa City, the piece strives to describe the impressions one might get while walking through the downtown of the city after a sunset. The work calls for the violins to be retuned to microtonal tunings, to add an air of exoticism to the piece. The thematic material draws its influence from the popular tunes one might hear while passing by the local bars.

Composed in three short weeks, Quartet in Five Parts is a humorous, yet absolutely sincere tribute to an American composer, theorist, writer, philosopher, and artist John Cage. The first part celebrates Cage's life and is based on his musical cryptogram. The second part develops the cryptogram and introduces indeterminacy. The third part introduces silence and is constructed entirely from the material borrowed from Cage's Quartet in Four Parts (1950). The fourth part... The fifth part re-opens the quartet.

Stas Omelchenko (b. 1982) has studied composition with Lawrence Fritts, David Gompper, Stacy Garrop, Kyong Mee Choi, Don Malone, Gyula Fekete, and John Eaton. Additional studies and master classes were with Marta Ptaszynska, Bernard Rands, and Mark-Anthony Turnage. He received his Bachelor of Music degree at the Chicago College of Performing Arts at Roosevelt University and Master of Arts degree at the University of Iowa. He is currently pursuing a Doctor of Philosophy degree at the University of Iowa where he serves as a teaching assistant in music theory.

'Angelus Novus' shows an angel looking as though he is about to move away from something he is fixedly contemplating. His eyes are staring, his mouth is open, his wings are spread. This is how one pictures the angel of history. His face is turned toward the past. Where we perceive a chain of events, he sees one single catastrophe which keeps piling wreckage upon wreckage and hurls it in front of his feet. The angel would like to stay, awaken the dead, and make whole what has been smashed. But a storm is blowing from Paradise; it has got caught in his wings with such violence that the angel can no longer close them. This storm irresistibly propels him into the future to which his back is turned, while the pile of debris before him grows skyward. This storm is what we call progress. —Walter Benjamin

My intention in this piece is juxtapose musical elements signifying the trend in musical perception from pitched based to sound based. Traditional ideals of melody, pulse, and technique are contrasted with more modern notions of clarity/noise, relative timing, and extended techniques. Instead of being perceived as disparate elements, they are presented in a fluid manner, fading in and out of one another, as one would experience a chain of events in time. Despite the somewhat cynical nature of the quote, I had no intention to comment on the validity of either musical aesthetic and none should be assumed.

is a jovial piece that contains a short motive consisting of quick repetitive notes within a thin texture. It is reiterated throughout the piece in different guises: canon, inversion, and in octaves. The short, disjunctive phrases are filled in with rests, avoiding long continuous melodies. It is included within a collection of studies that display the influence of the Russian school on the composer's works. This piece has also been transcribed for string quartet.

Jonathan Tauscheck was born and raised in Minneapolis, MN. He began piano lessons from a neighborhood teacher in second grade and transferred to MacPhail Center for the Arts in fifth grade. He was awarded a music scholarship in piano performance at the University of Minnesota-Twin Cities where he studied with Alexander Braginsky. He earned his Bachelors and Masters of Music while attending the University.

Jonathan is also an active composer. He has written many works for solo piano which have been performed at liturgical services, weddings, and as commissions for ballet performances. He has given solo composition recitals at the University of Minnesota, and Kirkwood Community College. His current projects include orchestrating many of his works along with the completion of three piano concertos. He is currently a music accompanist and piano instructor at Kirkwood Community College in Cedar Rapids and is pursuing his DMA at the University of Iowa in piano performance under the tutelage of Rene Lecuona and Eugene Gaub.

is the 75th piece in a series of 100 pieces, each written in a single day. The self-imposed rules of this project allow for one day to compose, followed (often times years later) by one day of revision. Many of these pieces were written for unspecified instrumentation allowing for a plethora of performance experiences. A few of these pieces have been performed, notably Symphony 6 and …dot…, many have not been performed, some cannot be performed and still others must not be performed. This piece was composed on 9-27-07 and revised on 10-31-10.