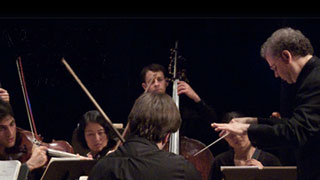 Four Sketches
In March of 2014, I was asked to write a piece for an upcoming concert in Venice, Italy, based on paintings of the Dutch artist, Mondrian. Thinking that solo violin would be an ideal medium for this project, I began to sketch the four movements on today’s program with the clear sound of that instrument in mind. A bit later, the group wrote to me with a final instrumentation request: that the piece should be for flute and harp. So my violin sketches, which I decided would now be a separate piece, began to veer in a slightly different direction, as I started focusing less on Mondrian and more on the various techniques and styles of twentieth century painters generally. The titles of each movement — Fragments in Motion, Circles, Points and Lines, and Seen Through a Haze — should be thought of in this non-specific way, although Mondrian’s images do still lurk in the background. The work lasts about 7 minutes.

Ancient Scenes
represents a bit of a departure for me in that it is one of my few "programmatic" pieces. There were, in fact, several sources of inspiration for the work. One was the beautiful poetry of the late Seamus Heaney, Ireland's Nobel Prize-winning poet. The second was a visit to the ancient town of Auvillar, France, where I was invited to spend a week as composer-in-residence at the Etchings Festival. The town had an ancient market area dating back to Roman times, and also had been (and is still today) a stopping-off point for pilgrims en-route to a sacred shrine in the Spanish city of Santiago de Compostela. So I envisioned the development of such a town in its early stages, and incorporated into the work poems from Heaney's oeuvre that seemed to suggest images from this fictional history. The instrumental movements (Origins, Constructions, Journeys: Pilgrims, Prayer, Conflicts, Reconciliations) suggest a chronological trajectory. The poems are stops along the way. The first poem takes its cue from the sound of the crowd echoing through an ancient coliseum; the second accompanies a dance (sounding more Irish than French to my ear) that might have been performed as festive entertainment. The third song is a reflection on the fragility of the human condition, and the last paints a portrait of a still harbor shimmering in the light. There are seven movements altogether (some connected) and the work lasts approximately 28 minutes

Lyrics II
is the second in a series of “lyric” pieces (the first being for solo cello) that takes its cue from the poetic usage of the word, i. e., a poem expressing “a single state of mind or feeling” (as opposed to, say, narrative verse or a dramatic ode). This is somewhat different, also, from the musical associations often conjured by the word “lyrical,” such as long, singing lines or pastoral evocations. The first movement is ruminative and searching, the second driving, restless, and propulsive. Each movement is in one breath---the two parts together comprise a five-minute arc.

Chamber Symphony
My Chamber Symphony, composed in 2009, is in three movements; these follow a somewhat traditional moderate/slow/fast format. In the longer first movement, the music seemed to want to range over a particularly wide spectrum of ideas and harmonic idioms, and part of the fun (and challenge) was to try to create seamless connections between disparate harmonic realms. Exploring various color combinations of an ensemble with just about one of every instrument was another preoccupation. A third was writing a movement that gradually “gathered steam” as it progressed, but in a way that would not seem overly obtrusive to the listener. The second movement is a simple song (for a reduced instrumentation), with the first violinist as soloist. In the third movement, many of the gestures of the first two movements are recast, but now in the context of a rambunctious finale. The work lasts about 20 minutes.

Described by The New Yorker as a composer of “fearless eloquence,” Louis Karchin has been honored with performances of his music throughout the United States, Europe and the Far East. Current projects include works for the Network for New Music of Philadelphia, the Plurimo Ensemble of Venice, Italy, a work for viola and electronics for Lois Martin, and a second opera, Jane Eyre, based on the Charlotte Brontë novel. His first opera, Romulus, released by Naxos Records in 2011 has garnered notable press attention internationally, with Opera News writing in a feature review, "It announces its originality right out of the gate...and sustains it through to the very end of its seventy-two-minute running time." The recipient of a John Simon Guggenheim Foundation Fellowship for 2011-12, Mr. Karchin was honored in May of 2012 with the inaugural Andrew Imbrie Award of the American Academy of Arts and Letters. Additional recognition has included awards from the Koussevitzky, Barlow, and Fromm Foundations, the American Academy's Goddard Lieberson and Walter N. Hinrichsen Awards, and three National Endowment for the Arts Fellowships. His music is recorded on Naxos, New World, Albany and CRI labels, and is published by C. F. Peters Corporation and the American Composers Alliance. A new disc of his music is forthcoming on Bridge Records. A frequent conductor of new music, Mr. Karchin co-founded the Orchestra of the League of Composers, and with them has conducted world or New York premieres by Elliott Carter, Arthur Kreiger, Joan Tower, Charles Wuorinen and Shulamit Ran, among many others. He is Professor of Music at New York University.