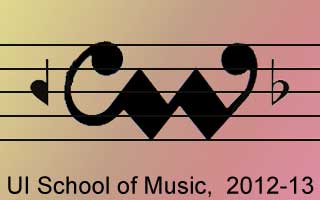 The Curiosity rover landing on Mars during the summer of 2012 was a major success and was celebrated by people from all over the world. All of the minute details of the landing came together to successfully put the largest rover on the surface of this distant planet. One of the unsung heroes of this mission was the sky crane, whose mission was to emerge from the descending capsule and level itself to a proper height in order to slowly lower the rover to the ground before soaring off to a crash landing. Sky Crane, for percussion ensemble, is a tribute to this amazing accomplishment of engineering and its short purpose to the greater Curiosity mission.

Zach Zubow's compositions have been featured on numerous new music conferences and festivals throughout the United States, Europe and Asia. He has won awards from the College Music Society, named the Region IV winner of the SCI Student National Composition Competition and was first place recipient from the Five College New Music Festival Student Composition Competition. Zubow completed his PhD in music composition from The University of Iowa in May of 2012 and currently teaches music theory and composition courses at Grinnell College, Cornell College and Coe College. For more information please visit www.zachzubow.com.

Originally Inspired by the nightlife of Iowa City, the piece strives to describe an array of sounds and impressions that a night can offer, from the sounds of popular tunes coming from the local bars to the sounds of wind. The work calls for the violins to be retuned to microtonal tunings, to add an air of exoticism to the piece. Violins are retuned not according to any specific system, but rather to achieve an acoustically pleasing sound.

Born in St. Petersburg Russia in 1981, Leonid Iogansen started playing violin at the age seven and started composing his first works shortly after. He has performed at numerous venues in the United States (where he moved at age twelve), as well as abroad and has won several competitions, including Young Virtuosos International Competition in 1999. As a composer, Leonid has received various commissions. In 2006, Shuang Yin International Music Festival has commissioned him to compose a number of humorous pieces for various chamber ensembles as well as for the Festival Orchestra, adding up in length to an hour of music.

As a teacher, Leonid taught at various music schools such as the Music Conservatory of Westchester in NY and at Biryukov Academy of Art and Music in NJ.

Leonid Iogansen is also an artist and has won many competitions for painting, local and national, both in Russia and the United States. In 1997, he received the Gold Key Award at the Boston Globe competition. Fifty of Leonid's works were accepted to the fund of the National Russian Museum in St. Petersburg, some of which were exhibited in the States.

is a composition for violin and viola written during a 24-hour composition project in 2012 at the University of Iowa. In this piece I tried to use a combination of elements found in both western and eastern (Iranian) music. The composition makes use of unexpected accents within stable rhythmic patterns set against a free melodic part. Both rhythmic and lyrical elements represent my native and new life in this country.

Nima Hamidi (b. 1984) lived as a composer in Tehran until 2011. Before studying composition in Iran he studied the Setar, an Iranian traditional instrument, and the guitar. Because of having lived in Tabriz for most of his life, he has aural knowledge of Azerbaijan folk music. Currently he is enrolled in the PhD program in composition at the University of Iowa.

Did you know it's an election year? This piece received its premier at the Eastern Trombone Workshop in 2012, which is held annually just across the Potomac from this Nation's capital. Inspired by the location of the event, I wrote this piece with two opposing ideas in mind. One might be considered more conservative while the other more liberal.

Will Huff holds a B.M. summa cum laude at the University of Arkansas (2008) and a M.M. at Butler University (2010). His commissions range from pieces written for friends to the Fort Smith Symphony (director, John Jeter). His most recent success includes the premier of his solo trombone piece, A Divisive Dichotomy, in Fort Myer, Virginia at the Eastern Trombone Workshop this past March. He has participated in ensembles devoted to new music including the JCFA Composer's Orchestra, Ensemble 48, and the Outside Orchestra all based out of Indianapolis. After graduating from Butler, Will Huff moved to Chicago where he worked at the Chicago Symphony Orchestra and played in the band Bricklayer's Foundation. Will Huff is currently pursuing a doctorate at the University of Iowa where he holds a TA in Theory/Composition as well as graduate assistant to the Electronic Music Studios directed by Lawrence Fritts. His composition teachers have included Robert Mueller, Frank Felice, Michael Schelle, Lawrence Fritts, and David Gompper.

ismriy, for flute and electronics

makes use of PureData to analyze the sound of the flautist. It creates a web of sound using this analysis, based on the pitches and timbres created by the flute. The events created by the software are random in their timing and content, but follow a general morphology over the course of the piece.

Daniel Frantz received his BM in music composition and electronic music from the University of South Florida. There he studied with Paul Reller and Michael Timpson. He was awarded the Patrick Keim Memorial scholarship for composition in 2007, and received a talent grant for clarinet performance. He is currently pursuing his MA in composition at the University of Iowa.

Elephant was originally written for trombonist Shelby Kifer. The piece was written in September 2012 as part of the University of Iowa's 24-hour composition project. The entire contrabass trombone range is covered, from A0 to F4

Justin Comer graduated in 2012 from Coe College with a B.M. in Composition and Saxophone Performance. He is currently pursuing a M.M. at the University of Iowa. His composition teachers have included Joseph Dangerfield and David Gompper.

Ebullient and pulse-driven, Fourth Stream Chronologies explores time – fast time, contracted time, layered time, and static time. Meter is implied then disguised throughout, culminating in several spots as quadra-meter – a polymeter with four distinct layers. Sprinkled here and there are unusual sounds such as a Marimba and Electric Bass duet as well as the lone hi-hat aiding not only in time management but proclaiming its own virtuosic, quasi-improvisatory voice into the milieu. The piece borrows unabashedly from well-established styles of music.

Matt Smart is a doctoral candidate in music composition at the University of Iowa. Current and past composition instructors include Tom Flaherty, Frank Felice, Michael Schelle, David Gompper, Lawrence Fritts. Matt received his B.A. from Pomona College and M.M. from Butler University where he was co-founder of the experimental new music group Ensemble 48. Matt's compositions have been performed by touring ensembles in China, Hong Kong, and Brazil as well as domestically. Before adopting composition full-time, Matt had musically directed over twenty theatrical productions, conducted dozens of ensembles and toured internationally as a pianist.