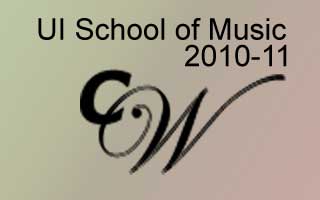 is scored for soprano, baritone and two violins. The text, in Spanish, was written by the composer:

Dame descanso
que me arde la luz del alba.
No estoy lista para el dia.
Dame descanso mientras espero la noche.
Grant me rest
for the light of dawn stings me.
I am not ready for the day.
Grant me rest as I wait for night.

The music reflects the juxtaposition between the peaceful comfort of the narrator's desired rest and the harshness of the intruding dawn and stinging light. The voices and violins blend by sharing similar material in the restful sections, and they clash when day is invading.

He is on the board of the long-running Society for New Music, where he served as education coordinator and chair of the Meet the Composer program. The Society has premiered several of Davidenko's compositions, most recently his String Quartet, which was performed by the Syracuse Symphony Orchestra String Quartet. He was awarded the Henry and Parker Pelzer Prize Fellowship in 2010 to study at The University of Iowa, where he is pursuing a Ph.D. in composition, studying with David Gompper and Lawrence Fritts. His music can be heard at www.diegodavidenko.com.

Into the Mind III

was composed in the summer of 2010 for Jared Fowler. It is an experiment in creating contrasts.

Originally from Cleveland, Ohio, Anthony Donofrio is currently a third-year Ph.D. student in music composition at The University of Iowa. He has studied with David Gompper, Frank Wiley, John Eaton, Paul Schoenfield, and Thomas Janson. His chamber work Obituary was recently premiered and recorded by the Five-One New Music Ensemble as a part of the Cleveland Public Theater's BigBOX series. In April 2011, The University of Iowa Symphony Band and soloists Meghan Aube and Lucas Bernier will premiere his dissertation, In Violent Silence: A Double Concerto for Two Percussionists and Wind Ensemble. He holds a Bachelor of Music, a Master of Music, and a Master of Arts from Kent State University.

Who do we bring with us into the mountains? How do we benefit from such excursions? What do we leave behind? As Thoreau states in Walden "...now, a taste for the beautiful is most cultivated out of doors, where there is no house and no housekeeper." Those of us who venture into the mountains do so for a number of reasons: to clear our minds and gain perspective, to reflect, to challenge ourselves, to live dangerously (perhaps), to reset our ears, to breathe rarefied air, to seek transcendence, or to simply get closer to the sky...

The instrumentation for 10,358 ft. was influenced by Galina Ustvolskaya's Composition No. 1 - Dona Nobis Pacem. In 10,358 ft., I attempt to reconcile a traditional use of motive with a more contemporary approach to fusing sounds. Motivic and timbral development occur within a mostly straightforward narrative framework. The piece begins slowly and becomes interrupted by a series of forecasting musical events.

Daniel Houglum, from Soldotna, Alaska, is pursuing the Ph.D. in music composition at The University of Iowa. He received his B.A. from Gonzaga University in Spokane, Washington and his M.Mus. degree from Northern Illinois University. Houglum has served as an instructor for Kishwaukee College in Malta, Illinois. His composition teachers include Kevin Waters, S.J., Robert Fleisher, David Maki, John Eaton and David Gompper. Houglum is the UI Center for New Music RA and teaches at the Preucil School of Music as a theory instructor for the Certificate Program. Recent composition projects include collaborations with musicians Stephen Page, Mabel Kwan, Christopher Sande, Emily Rolka, and poet Patrick Haas. Visit www.houglum-music.com for more information.

Music for Flute and Piano

The premise for Music for Flute and Piano is basic: to make music. In doing so, I made use of many compositional techniques, but unfortunately, they do not lucidly conform to a particular form of musical doctrine, nor do they establish any new techniques or formulas in this regard. Nevertheless, I have used two ideas which isolate areas within the work: short and long durations.

Currently studying with Dr. Lawrence Fritts, Jason Gregory is pursuing a master's degree in music composition at The University of Iowa. He holds a research assistantship within the dance department as a composer and sound designer, and he is a violinist for the cause of new music. He obtained his bachelor's degree in music composition from Northern Illinois University. In addition, Jason had the opportunity to study violin with Mathias Tacke of the former Vermeer Quartet.

Born in McGregor, Minnesota, Aaron Perrine earned his bachelor's degree in trombone performance and music education with high distinction from the University of Minnesota-Morris in 2002. While an undergraduate, he received the Edna Murphy Morrison Award, Daisy Hansen Award, Chancellor's Award, and multiple awards in composition from the Minnesota Music Educators Association. After his time in Morris, Perrine moved to Minneapolis and began working on his master's degree. While at the University of Minnesota, he studied composition with Judith Zaimont and jazz arranging with Dean Sorenson. Perrine completed his master's degree in 2006, and is now pursuing his Ph.D. in composition from The University of Iowa, studying with David Gompper and Lawrence Fritts. For more information, please visit his website at www.aaronperrine.com.

Wind from any one area of the world can be attributed primarily to that area's prevailing wind: the wind source that blows in one general direction over the earth's surface. Many factors can contribute to the direction and speed of the wind including elevation, terrain, and temperature. Prevailing winds then cause other, more inconsistent patterns in wind speed and direction across that area's surface. However, the new wind still remains a derivative of the original source. Prevailing Wind is a musical exploration for piano that grows and receives power from one original source. The consistencies and inconsistencies of wind can be felt throughout the piece, while still maintaining its beginning idea of one general direction through time.

Zachariah Zubow received his bachelor's degree from Luther College in Decorah, Iowa and graduated in 2008 with a master's in music composition from Illinois State University in Normal, Ill. Recently, Zach's music has been chosen to be included on the Society of Composers National Conference, Society of Composers Regional Conference, Electronic Music Midwest, and Iowa Composers Forum Conference this fall. His music has also been performed in Europe as well as the United States in recent years. Zach's composition teachers include David Gompper, Lawrence Fritts, David Feurzeig, Brooke Joyce, and Martha Horst. Zach is pursuing a Ph.D. in music composition at The University of Iowa and is a member of Iowa Composers Forum, Society of Composers, ASCAP, College Music Society, SEAMUS, and Electronic Music Midwest.