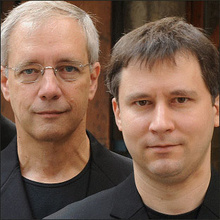 Wolfgang David and David Gompper met in 2000, when Wolfgang was on a concert tour of the US. They began to work together as a performer and composer, which resulted in eleven works composed by David Gompper especially written for Wolfgang David, including a Violin Concerto that Wolfgang recorded with the Royal Philharmonic Orchestra for the NAXOS label. In 2002 both musicians were invited to perform together as a violin & piano duo in Moscow. Encouraged by this success, they have since presented over 100 concerts, touring throughout the United States and a number of countries in Europe. While their repertoire includes traditional works for this instrumentation, the main focus is a combination of late romantic, standard 20th century and contemporary compositions written especially for them. Four CDs of the duo are available: two on Albany label, and one each on Naxos and VDE-Gallo.

In the space of a few short years, Wolfgang David has ensconced himself on the international stage, both as a recitalist, and as a guest soloist with many leading orchestras such as the Royal Philharmonic Orchestra, Vienna Radio Symphony Orchestra, Johannesburg Philharmonic Orchestra, Berne Symphony Orchestra, New York Virtuosi etc. He tours regularly throughout Europe, North and South America, as well as Japan.
The winner of many competitions and prizes, David has performed in major halls such as Konzerthaus and Musikverein Hall in Vienna, Carnegie Hall in New York, Cerritos Center in Los Angeles, Wigmore Hall and Cadogan Hall in London, Victoria Hall in Geneva, UNESCO Hall in Paris, Philharmonie in Cologne, Bolshoi Hall Moscow, and Bunka Kaikan Tokyo.
He has been well received by the press — the Washington Post wrote that he "scaled the heights of musicmaking” and The Strad described his playing “as emotionally wide-ranging as one could hope for”.
Admitted to the University for Music in Vienna at the age of eight, David studied there for many years with Rainer Küchl, the concertmaster of the Vienna Philharmonic Orchestra. Later he continued his studies at the Musikhochschule in Cologne with Igor Ozim and with Yfrah Neaman at the Guildhall School of Music in London.
Highlights of his career included concerts at the Great Assembly Hall of the United Nations in New York in the presence of Secretary General Kofi Annan, and a concert in Bangkok, given for the Queen of Thailand.
Wolfgang David performs on a violin built by Carlo Bergonzi, Cremona after 1724, on exclusive loan to him from the Austrian National Bank.
Wolfgang David has recorded nine CDs for Albany Records, Decibel, NAXOS, Sonare and VDE-Gallo. His recording of Beethoven’s Sonatas 6 & 8 and Franck’s Sonata together with pianist Takeshi Kakehashi was awarded the highest recommendation for the February 2016 issue of the Japanese record magazine “Record Geijutsu“. Wolfgang David’s interpretation of David Gompper’s Violin Concerto together with the Royal Philharmonic Orchestra under the baton of Emmanuel Siffert was praised by the critics. The Gramophone Magazine described his collaboration with David Gompper as “a working relationship as close and meaningful as Brahms had with Joachim.“

Nuance
Based on a simple tune heard at the outset and its development into dual lines, the work is a short study that explores sustained sound that is almost completely muted and covered. Used are several basic bowing techniques: fast bow-speed that heightens spectral properties; bowing "on the node" to achieve a "baroque" flute sound; very short and quiet playing "on the string" for a deadened wooden timbre, and a more typical rubbing on the bridge to extend pitch into its non-pitched counterpart. This was written in London on January 20, 2012 for Wolfgang David.

Ikona
for violin and piano is a contemplation of a 19th-century Russian icon of St. Nicholas. Three elements are present in the iconic rendering: a square (book of the Gospels), a triangle (created from the crosses of his stole) and three circles (in which the figures of the saint, Christ and Mary appear nimbated). The main motive is derived from three layers of pitch matrices, revealed through a "window" created by the triangle. The 36x36 matrix is itself based on collections of trichords (3x3). Although popularized in western myth as Santa Claus, St. Nicholas was known for his generosity to children, justice for the oppressed, and fight to support the Doctrine of the Trinity at the Council of Nicaea. Hence, the all-pervasive number 3. The work, in three sections, not only follows in general ways the scansion of the Lords Prayer, in Russian, but musically renders three ideas: the linear (the word), the vertical (space), and the connection between the two in the way Eastern Orthodox Christian sign the cross (up, down, right, left).

David Gompper has lived and worked professionally as a pianist and a composer in New York, San Diego, London, Nigeria, Michigan, Texas and Iowa. He studied at the Royal College of Music (ARCM, MMus) with Jeremy Dale Roberts, Humphrey Searle and Phyllis Sellick. After teaching in Nigeria, he received his doctorate at the University of Michigan. He is Professor of Composition at the University of Iowa and directs the Center for New Music. In 2002-2003 Gompper was a Fulbright Scholar at the Moscow Conservatory. In 2009 he received an Academy Award from the American Academy of Arts and Letters in New York City, and in 2013 a Fromm commission (Harvard University). The Royal Philharmonic is recording five works for a forthcoming Naxos release: four concerti for Clarinet, Cello, Double Bass and a Double Concerto (Violin and Cello), as well as an orchestral work entitled Sunburst.

Chaconne
From the Partita in D minor, BWV 1004, the second of three Partitas that Bach wrote for solo violin, is comprised of five dance-based movements. The final, entitled Chaconne, is not only longer than any of the other movements but by all rights is considered a separate work. Bach took his cue from the French composers, who replaced the quick paced gigues with the Chaconne as concluding movements. The rondo form was traditionally applied to the Chaconne (prototype: major key, triple meter, with a repeating four-bar theme starting on beat two), and Bach follows suit. Formally, the fourteen-minute work is in three large sections, with the middle section in the major mode. The theme is worked through a continuous set of variations, using multiple techniques to alter and develop the principal motive. Often performed, Bach's Chaconne is considered the most important repertoire for the solo violin. (DKG)

Johann Sebastian Bach was one of the greatest contrapuntalists and most prolific composers of the 18th century. He brought the Baroque era to the point of greatest maturity and assimilated the utmost variety of rhythms and textures from all over Europe. Bach was able to manipulate motive on both small and large scales, and his compositions exhibit a highly evolved sense of harmonic function and control.

Sonata for Violin and Piano in G Major
The Sonate for Violin and Piano was written between the years 1923 and 1927. The first movement opens with a single line in the piano reminiscent of the opening of L'enfant et les sortilèges, and alternating with the violin to present the main musical ideas. The second movement takes its inspiration from the American Blues, and the final movement, a Perpetuum mobile, tests the limits of the violinist's virtuosity.
Ravel dedicated the Sonata to Hélène Jourdan-Morhange, a violinist of great merit. Georges Enescu gave the premiere in Paris in May 1927, with Ravel himself at the piano.

The French composer Maurice Ravel (1875-1937), who took his training at the Paris Conservatoire, was one of the most original and sophisticated musicians of the early 20th century. His instrumental writing explored new sonorities, which he developed at the same time as his great contemporary Debussy, and his fascination with the past and with the exotic resulted in music of a distinctively French sensibility and refinement.

Capriccio for Violin and Piano
Dedicated to Howard Ferguson, the Capriccio marked a moment of expressive and stylistic emancipation from which I was able to go forward. A compact 'Konzertstuck' in roughly two parts with a coda, it is quite colourfully virtuosic for both instruments. I took as my models the Capricci of Paganini, the duo sonatas of Bartok and (as will be obvious) certain traits in the music of Szymanovsky. My intention was covertly to harness fantasy and reverie within quite strictly disciplined procedures. Thus all the thematic material is engendered in the opening bars, a challenging flourish for the violin, echoed later in the work in its own terms by the piano: from these gestures is launched all that ensues. — Jeremy Dale Roberts

Jeremy Dale Roberts (b. 1934, Gloucestershire, England), who recently retired as Head of Composition at the Royal College of Music, London, was a Visiting Professor of Composition at the University of Iowa for the 1999-2000 academic year.
He studied with William Alwyn and Priaulx Rainier at the Royal Academy of Music, London. His compositions have been performed worldwide at the Edinburgh and Aldeburgh Festivals, the Venice Biennale, the Diorama de Geneve, and the festivals of Avignon and Paris.
They include the cello concerto Deathwatch, written for Rohan de Saram; Tombeau for Stephen Kovacevich; Croquis for string trio, written for members of the Arditti Quartet (BBC commission); In the Same Space, nine poems of Constantin Cavafy, written for Stephen Varcoe; Lines of Life, lyric episodes for ensemble, written for Lontano (BBC commission); and Casidas y Sonetos — del amor oscuro, for solo guitar (Arts Council commission) for Charles Ramierez.
Recent commissions include Hamadryad for alto flute, viola and guitar; Stelae, a work for gamelan; and Nightpiece for soprano and two bass viols.