sponsored by the Italian Cultural Institute in Chicago 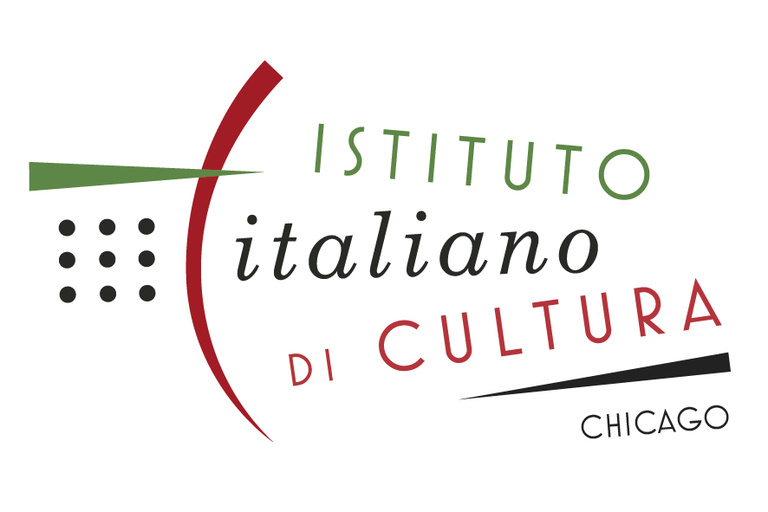 Yu Kuwabara - Bai and Dharani (2020-21) for solo violin
Who am I? Why was I born in Japan as a Japanese person? Facing such questions, I try to define my position by tracing back to the origin of Japanese sound and music. For the last ten years, I have dedicated myself to researching Shomyo, Japanese Buddhist vocal music. Bai and Dharani was written based on my recent topic: how can I give back what I learned from Shomyo to my composition in a way that goes beyond tracing? The first half is inspired by “Bai,” one of the Shomyo forms where an elderly monk sings solo. Besides, the second half consists of the idea of “Dharani,” a powerful incantation in Sanskrit.

Yu Kuwabara - Mizu no Koe (Water Voice) (2014-15/19) for solo violin
I always get impressed whenever I read literary works by the Japanese writer Kyoka Izumi (1873-1939). Some of my works were composed of inspirations that I found from his words and narrativity. This work, Mizu no Koe (Water Voice), was written based on “Messenger of The Sea,” one of his novels. In this his work, Kyoka adopted several short characteristic terms of onomatopoeia, such as きりきり (kirikiri), きりりりり (kiriririri), きいから (Kiikara), しゅっ (shu), etc. to describe some portraits of the scenes where water transforms. Combined and layered, onomatopoeias provide and remind me of vivid and detailed landscapes and soundscapes in which water is forming, running, waving, swirling, and disappearing. I tried to compose this piece by translating those onomatopoeias into musical sounds by a violin. 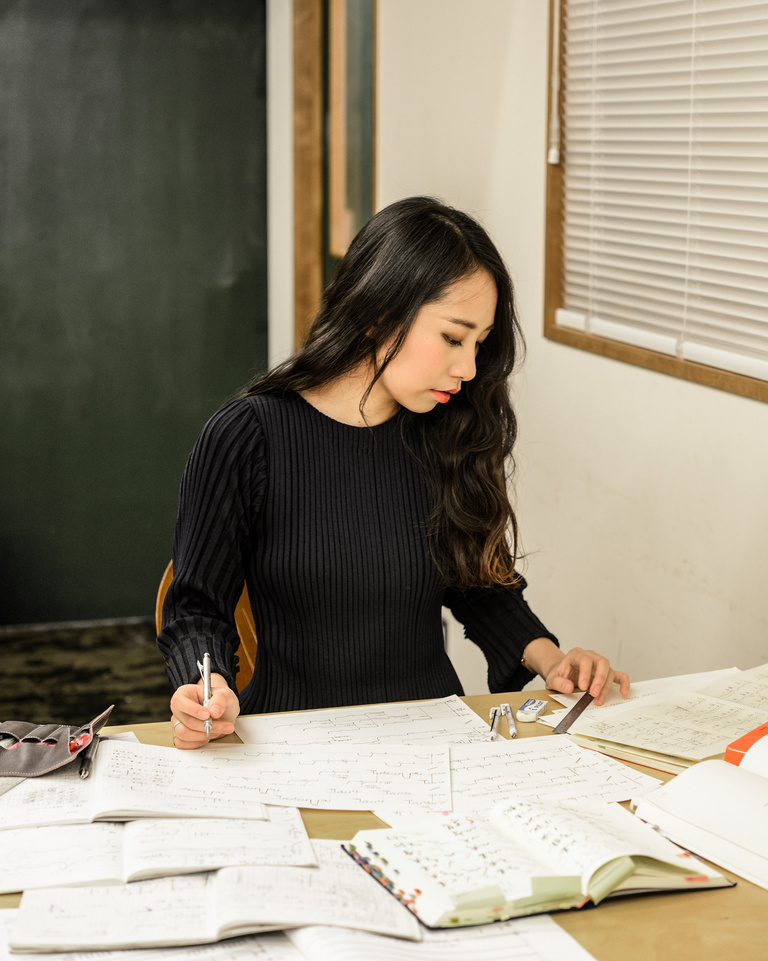 Tokyo-based Japanese composer Yu Kuwabara (b. 1984) makes music to ask herself who she is through thorough research of traditional Japanese arts and music. A winner of the 31st Yasushi Akutagawa Suntory Award for Music Composition, Kuwabara was commissioned by important festivals, foundations, and ensembles, including Festival 20/21 Transit, I&I Foundation, National Theatre of Japan. Her work has been performed by Ensemble Modern, Trio Accanto, and others at numerous international festivals and other concerts such as Darmstädter Ferienkurse, Ultraschall Berlin, CRESC... Biennale für Aktuelle Musik etc. She completed her master’s degree at the Tokyo University of the Arts and has taken part in prestigious academies, including Lucerne Festival Academy Composer Seminar, Academy Voix Nouvelles Foundation Royaumont, Akademie Schloss Solitude. Edition Gravis and Edition Wunn publish her scores. See https://3shimai.com/yu/index_Eng.html.

Tesseræ (2017-8) is a work for viola d'amore and electronics that draws inspiration from several traditional bowed instruments: the kemençe from Istanbul, the Indian sarangi, and the lyra from Crete— specifically the model with sympathetic strings championed by Ross Daly. The viola d'amore—an outlier in the Western tradition, in that it retains a set of sympathetic strings—provided an unusual opportunity to explore ideas about microtonal tuning and its relationship to the instrument's natural resonance.

Tesseræ is also the fruit of a rare close collaboration with a dedicated performer. Marco Fusi and I worked closely, first in Rome and later at CIRM in Nice, experimenting with tuning and notation, studying the minutiae of expression and ornamentation, and exploring electronic and acoustic resonance, constantly refining and improving a shared vision of the piece.

The vocabulary of the solo part is deliberately restrained, almost entirely restricted to conjunct, monophonic motion. Long, expressive lines are assembled from microtonal fragments—not traditional modes for the most part, but similarly-derived collections of pitches that could be bits of makam or raga, if only things had developed slightly differently. Tonal centers drift; drones emerge, then modulate...

With obsessive attention to articulation and detail, I sought to emulate the gestural language of the masters, as well as coloristic details of their sonorities. A specially-commissioned wooden mute refocuses the sound, filtering the timbre and altering the balance between the bowed and sympathetic strings—several of which are prepared to buzz in homage or imitation of the javari bridges on Indian instruments. The electronics underscore these phrases with clouds of retuned samples, canonic echoes, and virtual resonance that mimics the viola d’amore’s sympathetic strings.

Tesserae is dedicated to Marco Fusi, and to the memory of the sarangi master Dhruba Ghosh, my friend and collaborator in the Atlas Ensemble.

The American/Italian composer Christopher Trapani was born in New Orleans, Louisiana (USA). He earned a Bachelor’s degree from Harvard, then spent most of his twenties overseas: a year in London, working on a Master’s degree at the Royal College of Music with Julian Anderson; a year in Istanbul, studying microtonality in Ottoman music on a Fulbright grant; and seven years in Paris, where he studied with Philippe Leroux and worked at IRCAM. Christopher earned a doctorate in 2017 from Columbia University in New York City, where he studied with Tristan Murail, George Lewis, Georg Friedrich Haas, and Fred Lerdahl. Christopher is a 2019 Guggenheim Fellow and a former winner of the Rome Prize (2016-17). He has held fellowships at Akademie Schloss Solitude, Camargo Foundation, and the Bogliasco Foundation. Christopher is the winner of the 2007 Gaudeamus Prize, along with commissions from the Koussevitzky Foundation, the Fromm Foundation, and Chamber Music America. Waterlines, his debut portrait CD, featuring performances by Talea Ensemble, JACK Quartet, and others, was released on New Focus Recordings in 2018. A second recording of Waterlines by ICTUS was released in 2020. Projects for the 2021-22 season include commissions from Klangforum Wien and Ensemble Modern, a new work for the Grossman Ensemble at the University of Chicago (Fromm Foundation Commission), and a new song cycle for a consortium of sopranos, commissioned in conjunction with the 2020 Barlow Prize. For more information, please visit: www.christophertrapani.com

Based on a simple tune heard at the outset and its development into dual lines, the work is a short study that explores sustained sound that is almost completely muted and covered. Used are several basic bowing techniques: fast bow-speed that heightens spectral properties; bowing "on the node" to achieve a "baroque" flute sound; very short and quiet playing "on the string" for a deadened wooden timbre, and a more typical rubbing on the bridge to extend pitch into its non-pitched counterpart. This was written in London for Wolfgang David.

Voltaic, for viola d'amore & live electronics
In this piece, the viola d'amore sound developed by Louis-Toussaint Milandre and Henri Casadesus is set in a dialog with live electronic processes developed in the 20th and 21st century. In the tradition, the piece includes both written and improvised parts. Voltaic is written for inspired and inspiring performer Marco Fusi. 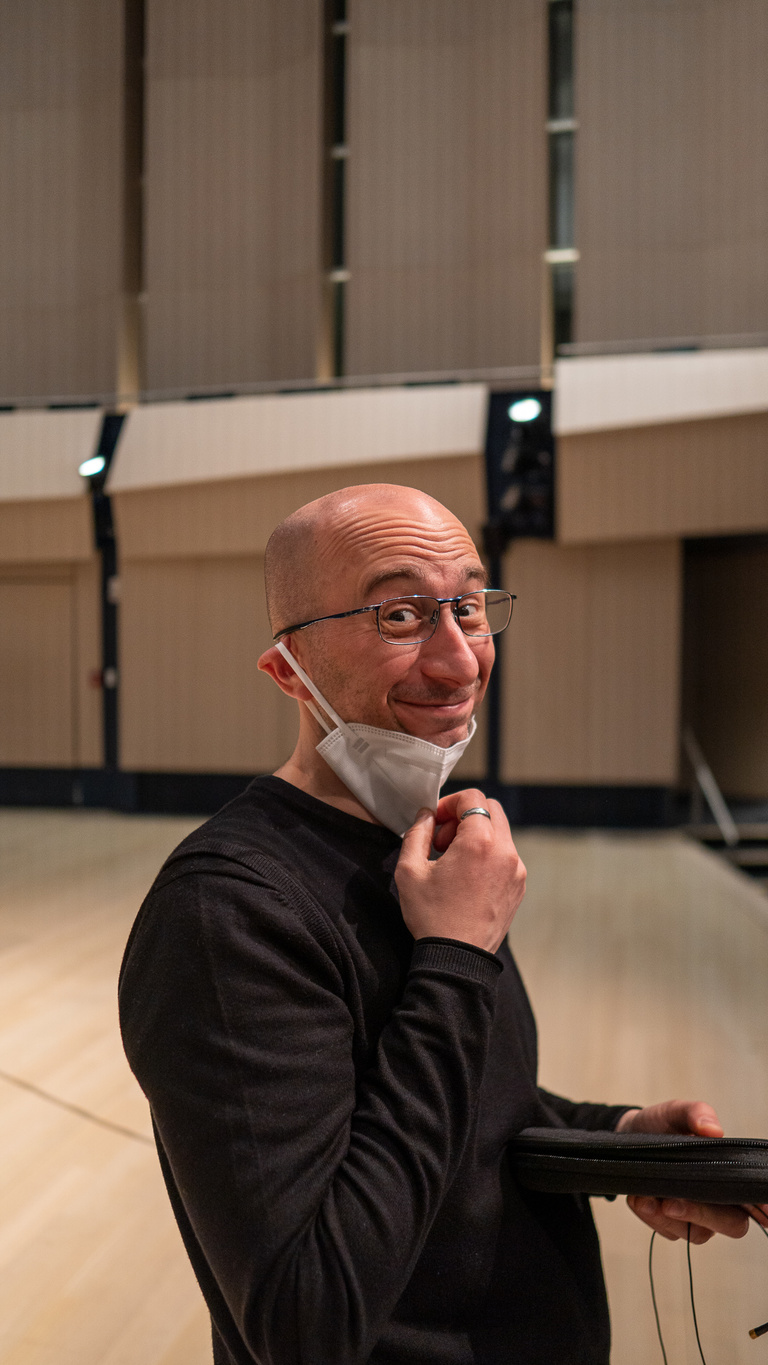 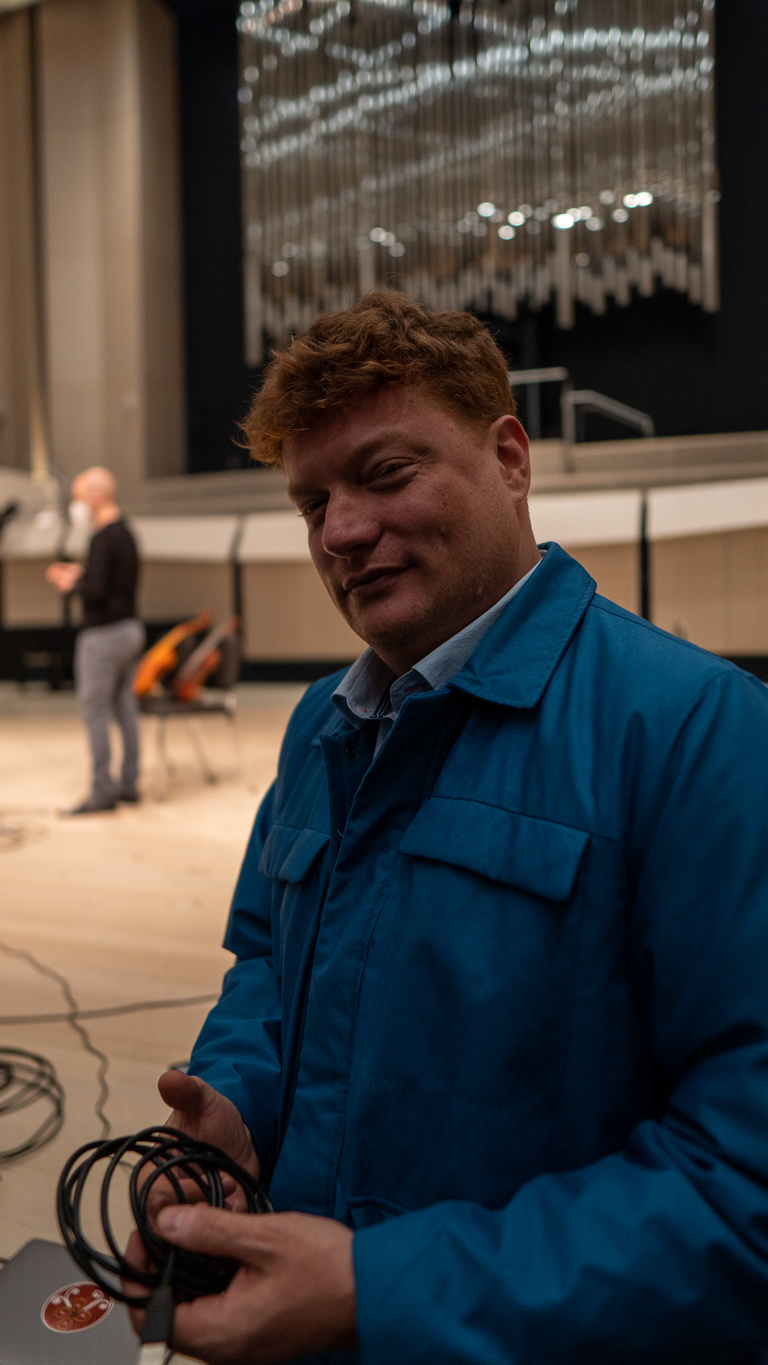 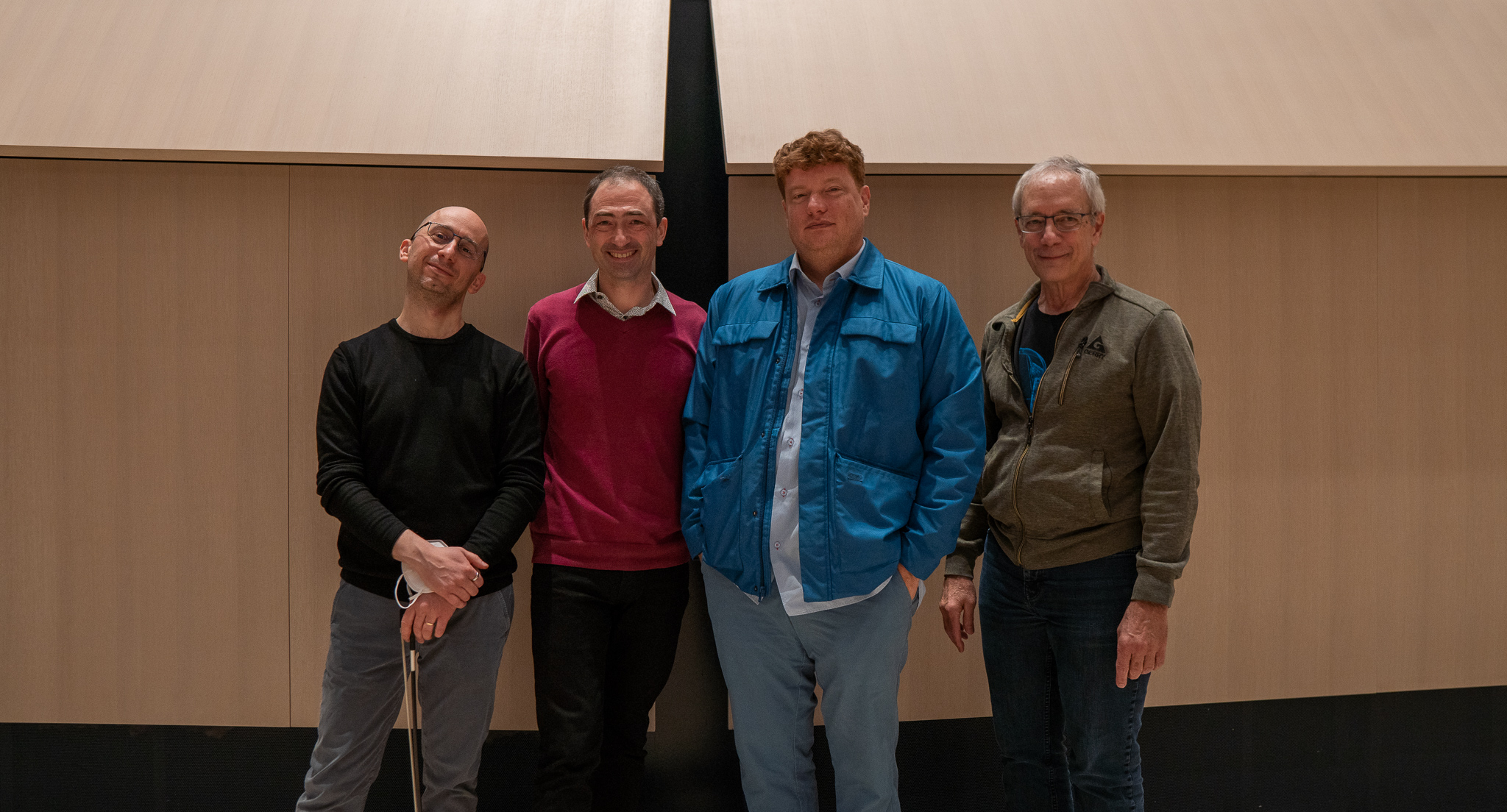