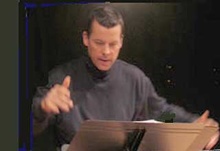 Scott Dunn is Associate Conductor of the Hollywood Bowl Orchestra. Recent schedule highlights include two premieres for New York City Opera; conducting appearances with the Hollywood Bowl Orchestra and headliners Chris Botti and Natalie Cole; numerous recordings for NAXOS and other labels; recent premieres of major chamber works by Adams, Alfano and Duke, as well as the premiere of his own orchestration of Schoenberg's CABARET SONGS here at the University of Iowa.

A native of Eagle Grove, Dunn has a Bachelors of Music from Iowa and a Masters of Music from the Manhattan School. Though he doesn't practice medicine, he also has an MD from Iowa and board certification in ophthalmology. His distinguished musical mentors include John Simms and Byron Janis (piano), Lukas Foss and Jorge Mester (conducting) and Leonard Rosenman and Sir Richard Rodney Bennett (composition and orchestration).

At a time when public concerts had become routine, certainly in such major musical centers as Vienna, Arnold Schoenberg and several of his musical colleagues established a Society for Private Musical Performances (Verein für Musikalische Privataufführungen). In addition to the very practical goal of economy, the Society encouraged careful study of modern musical works in a thoughtful and serious fashion. (Not yet were recordings of such music available for study as a matter of routine.) These private concerts permitted closer examination of contemporary works under controlled conditions. The programs included, in addition to solo instrumental and vocal music or small chamber works, reductions of larger scores, thereby providing clarification of the inner structure of large-scale compositions. Schoenberg's colleagues – Berg, Webern, Irwin Stein – or Schoenberg himself prepared most of these performing versions (in many cases calling for just one or two pianos). Berg explained the concept thus: "…to listen to and judge many a modern work for orchestra shorn of the multitude of sound effects it owes to its orchestration, deprived of its most conspicuous artifices." According to some sources, some 154 works were performed in 117 concerts, over a span of nearly three years (February 1919 to December 1921).

This program begins with an arrangement (Debussy/Sachs) created for and performed at a Verein concert in October 1920. The other works would very likely have been heard later that decade, had the Society continued beyond 1921. Weill's musical career was on the rise from the mid-20s, and Ravel was a Schoenberg favorite whose works (such as Gaspard de la nuit were indeed programmed on various Verein concerts.

Debussy had already turned 30 when his Prélude à l'après-midi d'un faune was composed in 1893. He worked simultaneously on his String Quartet, and these scores are widely accepted (especially the Prélude as marking the beginning of 20th-century music. This Prélude is no more an introduction to anything than are the 24 piano works which comprise the two books of Préludes Debussy would compose later. The languid, haunting evocation of a warm afternoon during which the mythical faune dreams of erotic encounters (as set forth in Stéphane Mallarmé's poem), might seem an unlikely candidate for de-orchestration to fit the Verein mode, but Benno Sachs was alert to the many solo lines of the original, and he even retained the antique cymbals which add an extra element of color. (Debussy himself prepared a two-piano version of the score.) This score had an element of sensation added to its portfolio when it was presented by Diaghilev's Ballets Russes in 1912, with Nijinsky's scandalous masturbatory choreography outraging most of the audience, and the composer himself.

Schoenberg's name was frequently encountered as one of the arrangers of works for the Verein ensemble. (His contributions ranged in scope from a pair of Strauss waltzes, Roses from the South and the Lagunen-walzer – transcriptions produced for a 1921 benefit concert and auctioned off in an unsuccessful attempt to keep the Society viable – to Mahler's Das Lied von der Erde). The Four Cabaret Songs, scored for voice and piano, were orchestrated more recently for Verein-like forces by Scott Dunn, who received encouragement from scholar and pianist Leonard Stein (1916-2004), Schoenberg's assistant in the composer's later Los Angeles years and longtime director of the Schoenberg Institute.

Before Schoenberg had divorced his compositional style from the tonal system, he was intrigued by a 1900 collection of poems (Deutsche Chansons) by several writers involved in the Literary Cabaret of Berlin. He composed a setting of Nachtwandler (for piccolo, trumpet, snare drum, voice, and piano) that April, and set several of the other poems (for voice and piano) around the same time. After encountering Berlin's Überbrettl company (which visited Vienna on tour in 1901), Schoenberg was hired as the company's Kapellmeister in December of that year, whereupon he moved from Vienna to Berlin, although the company, and his post, did not last even a year.

The poets whose words Schoenberg set in his Brettl-Lieder included such luminaries as Frank Wedekind (who would later collaborate with Alban Berg on Lulu) and, from an earlier age, Emanuel Schikaneder (librettist and star of Mozart's Die Zauberflöte). Although traditionally sung by a soprano, the poems present a distinctly male character in the first person. The texts range over a landscape of bawdy innuendo and sexual double entendre. Gigerlette recounts a visit to an entrancing creature who takes the narrator on a ride to the land of delight, with Cupid driving the horses. Der genügsame Liebhaber explains how feline fondling can be a means of universal enjoyment. Galathea provides an anatomical roster of what would be suitable zones for kissing (except that the young girl is a bit too young). Arie aus dem Spiegel von Arkadien confirms the robust heartbeat of a young man who is always ready for love. Nachtwandler offers us a guided tour of his nightly visits, with appropriate discretion indicated.

Having begun with one of Debussy's earliest triumphs, the program resumes with one of Ravel's last major works (his Sonata for Violin and Piano), which incorporates elements of jazz and blues. Convinced that the violin and the piano were essentially incompatible, Ravel sets one against the other with independent materials. In the opening movement, sonata form is evident as themes (contrasting and complementary) are introduced, varied, and reviewed again. Evoking the spirit of America in the second movement, Ravel even quotes Gershwin's "Fascinatin' Rhythm." And yet, the whole thing is French in spirit. Ravel observed "the striking and essential differences to be noted in the 'jazz' and 'rags' of Milhaud, Stravinsky, Casella, Hindemith, and so on. The individualities of these composers are stronger than the material appropriated." The concluding movement offers a summing up, with increasing opportunities for display, especially for the violin. Ravel's jazzier orchestral scores (including the G-major Piano Concerto he was yet to write) are brought to mind more than once.

From the same period of the late 1920s comes the sensationally popular music of Kurt Weill in the form of two suites for dance band from Die Dreigroschenoper. This updated retelling of The Beggar's Opera, with a text by Bertolt Brecht, opened in Berlin in August 1928, and the play with music was an immediate success. As the original English opera had done some 200 years prior, Weill's music emulated popular songs, drawing on the Überbrettl style Schoenberg had had a hand in almost 30 years before. Recordings were issued and by December, the music publisher Universal Edition (also the source for scores by Gustav Mahler, among other notables) was selling what was titled "A Dance Potpourri after the 'Dreigroschenoper' by Kurt Weill (Part I: Blues-Potpourri; Part II: Foxtrot-Potpourri) for salon orchestra with jazz parts arranged by Hartwig von Platen." The scoring of the two "potpourris" is for a conventional dance band of the time, with saxophones, trumpets, trombones, and rhythm section. Tempos are consistent within each of the two suites in order to accommodate dancers. An entirely separate arrangement (Kleine Dreigroschenmusik) made by Weill himself at the request of Otto Klemperer, set each of the main numbers as a distinct movement and is scored for a more standard wind ensemble, plus timpani, piano, percussion, bandoneon, banjo, and guitar. That suite was premiered at a different sort of dance, the Berlin Opera Ball, in February 1929.

Program Notes are by Dennis Bade, Associate Director of Publication for the Los Angeles Philharmonic.