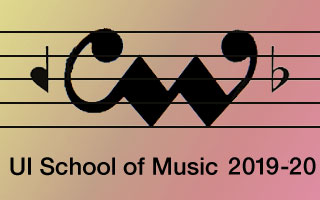 Mark Rheaume, trombone
Inspired by American religious music of the 19th century, Jhuene` uses the trombone to imitate improvisatory singing. The melody line draws on characteristics of the spiritual song, feeling human and singable even when well out of the range of the average voice, and its use of asymmetrical and changing meter creates a sense of freedom as opposed to lopsidedness. The piece ends with a multiphonic section inspired by congregational singing of 19th century protestant churches, creating contrast and resolution to the previous monophonic sections.

Will Yager, double bass
sul, for solo double bass, is inspired by my own experiences of observing the intricate choreography light creates as it travels through the natural world, specifically the sunlight that flows through the tree branches when observing from the ground. The concept of those fragile moments with the visual strength that these small performances create inspired me to consider ways in which I can occupy a similar performative space within sound. As abstract art is an important element to my compositional process when making formal and structural decisions, this piece takes inspiration from the paintings of Jason Twiggy Lott, specifically his work “Equation.”

4. Grace Coolidge
5. Eleanor Roosevelt
6. Jacqueline Kennedy
Anika Kildegaard, soprano
Matt Mason, piano
First Ladies is a song cycle that uses texts from letters, journals, books, and speeches written by seven First Ladies of the United States. Each song explores themes of balancing individualism with the responsibilities of being a national icon. Issues of femininity, national pride, rebellion are approached with vigor by these women, all of whom embodied the position of First Lady with nobility, strength, and grace, championing the title as it evolved from a simple figurehead to a full blown political office all of its own. I wrote the set as a way to honor these women and their contributions, as well as attempting to honor the women in my life as well.

Abigail Williams-Yee, double bass
Lauren Kundel, double bass
Ace White, double bass
Imagination’s Limit II - Laborious Continuation is the second piece in Imagination's Limit, a series of pieces exploring astrophysical concepts from a humanist perspective. Since the big bang, the universe has grown and evolved through a constant pattern of stellar birth and decay. Galaxies form, collide, merge, and coalesce. However, sometimes progress takes a wrong turn, and a new path is followed. All throughout, echoes of the past are constantly resounding.
Ace White is a second year student at the University of Iowa, currently majoring in Physics and Music. Their musical journey started in fourth grade with the double bass, and their passion for music blossomed when they began the electric bass in fifth grade. They started arranging music for themself and their ensembles in sixth grade. Their adventures into composition began in eighth grade when they began songwriting. A year later they started composing scores for duets and trios, but their music still retained a more lyrical tone. Three years ago, they started writing music for larger ensembles and began experimenting with more abstract works. Their works tend to be programmatic, feature a heavy bass presence, and showcase dissonance in a variety of contexts. They have studied under Carlos Cotallo-Solares, and are currently studying under Ramin Roshandel.

Jessica Fisher, flute
"Be Still" is a movement from a flute sonata in progress. This sonata as a whole is about someone I met who grew to be very important in my life, and some of the experiences we've shared together. "Be Still's" place in the sonata isn't the darkest, but it is about the longing, confusion, and uncertainty I had in the beginning stages of the particular relationship I shared with this person. I don't know when or if I'll ever see them again, but I will keep wishing until the day comes, whether it ever does or not. This movement has quotes from Pavel Chesnokov's "Salvation is Created," derived from the fact that this person held that piece so close to their heart.
Liliana Peraza is a composer born in southern California, attending her first year of college at the University of Iowa. She started playing the flute at age 10 before taking it seriously in her sophomore year in high school and making district and state honor bands. While she is in the university's flute studio, her music major's emphasis is in composition, and she studies under Wenxin Li. Peraza's pieces are more often than not programmatic, based off of dreams and nightmares, miracles and tragedies, and emotions words could never do justice for.

Will Yager, double bass
irreducibility suggests a dual atmosphere in which two main characters grow and shrink. After being premiered in 24+24 this year by Will Yager, this is a new and revised version of the piece.

Yixue Zhang, violin
As the title of the piece suggests, Soaring Over a Storm depicts an imaginary bird flying through a storm. Having confidence in triumph, he is fearless of the crashing of the thunder, never retreating nor cowering, but bravely flying forward until the clouds are scattered and the storm has abated. There is no rest in the violin part, especially the perpetual motion at the beginning. This piece was written in Iowa City in October for Yixue Snow Zhang.