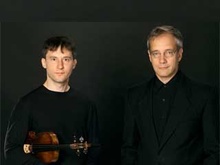 The Second in a Tour of Concerts by

In the space of a few short years, Wolfgang David has ensconced himself on the international stage, both as a recitalist, and as a guest soloist with many of the world's leading orchestras, such as the Royal Philharmonic Orchestra, Vienna Radio Symphony Orchestra, Johannesburg Philharmonic Orchestra, Berne Symphony Orchestra, New York Virtuosi etc. He has been well received by the press--the Washington Post writes that he has "scaled the heights of music-making," while The Strad praises his playing for being as "emotionally wide-ranging as one could hope for," and Thomas Frost, Senior Executive Producer at SONY Classical, foresees for him "a significant international concert and recording career."

Admitted to the University for Music in Vienna at the age of eight, David studied there for many years with Rainer Kuechl, the concertmaster of the Vienna Philharmonic Orchestra. He subsequently continued his studies at the Musikhochschule in Cologne with Igor Ozim, and at the Guildhall School of Music in London with Yfrah Neaman.

The winner of many competitions and prizes, David has performed in major halls such as Konzerthaus and Musikverein Hall in Vienna, Carnegie Hall in New York, Cerritos Center in Los Angeles, the Wigmore Hall in London, and Philharmonie in Cologne. He has concertized in over 30 countries and tours regularly throughout Europe, the United States, South Africa, and South Korea. In 2006 David recorded an album of compositions by the King of Thailand Bhumibol Adulyadej with the Royal Philharmonic Orchestra (London) under the baton of Emmanuel Siffert.

Highlights of his career have included concerts at the Great Assembly Hall of the United Nations in New York in the presence of Secretary General Kofi Annan, and a concert in Bangkok, given for the Queen of Thailand.

Wolfgang David performs on a violin built in 1715 by Carlo Bergonzi, Cremona, on exclusive loan to him from the Austrian National Bank. Wolfgang David has recorded a CD with the Royal Philharmonic Orchestra under the baton of Emmanuel Siffert and two albums with the American pianist David Gompper.

David Gompper has lived and worked professionally as a pianist, a conductor, and a composer in New York, San Diego, London, Nigeria, Michigan, Texas and Iowa. He studied at the Royal College of Music in London with Jeremy Dale Roberts, Humphrey Searle and Phyllis Sellick. After teaching in Nigeria, he received his doctorate at the University of Michigan, taught at the University of Texas, Arlington, and since 1991 has been Professor of Composition and Director of the Center for New Music at the University of Iowa. In 2002 - 2003 Gompper was in Russia as a Fulbright Scholar, teaching, performing and conducting at the Moscow Conservatory.

Gompper's compositions are heard throughout the United States and Europe. In 1999 his Transitus (for wind ensemble) premiered at Carnegie Hall, and a number of his works have premiered in London's Wigmore Hall, including: Hommage a W. A. (William Albright) for piano; and Shades of Love, a song cycle on the poetry of Constantin Cavafy. The Slovac Radio Orchestra will record Gompper's Violin Concerto later this fall.

This sonata, one of Brahms's most favorite and well-known of the three works for violin and piano, is a penetratingly beautiful and tender composition. It is often referred to as the Rain Sonata because it takes the principal theme from his Regenlied, opus 59. The form is standard: three movements with the third constructed as a rondo. Thematically, the three repeated D's rhythmically cast as a dotted rhythm are persistent throughout each movement, helping to create a highly unified and structured work. (DKG)

Johannes Brahms (1833 - 1897) first became known as a pianist, having performed his first solo concert at the age of 15. He only became internationally known as a composer some 30 years after beginning his musical training, mostly due to his open opposition to the new Germanic school of composition, and the aesthetic principles of composers such as Franz Liszt. After the first complete performance of the German Requiem in 1869, Brahms' music became rapturously received and he finally enjoyed international renown and financial security. Brahms died of cancer at the age of 63 at his home in Vienna.

is a contemplation of a 19th-century Russian icon of St. Nicholas. Three elements are present in the iconic rendering: a square (book of the Gospels), a triangle (created from the crosses of his stole) and three circles (in which the figures of the saint, Christ and Mary appear nimbated). The main motive is derived from three layers of pitch matrices, revealed through a "window" created by the triangle. The 36x36 matrix is itself based on collections of trichords (3x3). Although popularized in western myth as Santa Claus, St. Nicholas was known for his generosity to children, justice for the oppressed, and fight to support the Doctrine of the Trinity at the Council of Nicaea. Hence, the all-pervasive number 3. The work, in three sections, not only follows in general ways the scansion of the Lords Prayer, in Russian, but musically renders three ideas: the linear (the word), the vertical (space), and the connection between the two in the way Eastern Orthodox Christian sign the cross (up, down, right, left). (DKG)

exist in eight versions of various instrumentations and epitomizes Pärt's Tintinnabuli style of composition. Structurally, Fratres consists of a collection of six musical phrases followed by a two-bar "interruption" or cadential rhythmic figure. The units (6+2) is repeated nine times, and each repetition is constantly varied in the violin, exploring the richness of the timbral and harmonic space that helps to give the work a meditative and spiritual rendering. (DKG)

Arvo Pärt (b. 1935) is Estonia's premiere composer. The majority of his output is known for its contemplative silence using a technique he calls "tintinnabuli" (from the Latin, little bells). Its guiding principle is to create two simultaneous voices as one line. Fratres is a prime example of this style, found in most works written since 1977. Since emigrating from Estonia 1980, Pärt has concentrated on setting religious texts, which have proved popular with choirs and ensembles around the world.

is the musical representation of a Russian Orthodox Cross. Structurally, the work is representative of my proportional analysis of the Orthodox cross. I measured between five points on the cross and then translated all of measurements into temporal units that I could use as event markers. As the piece progresses, the arrival of each juncture signals the unveiling of a new part of the principle theme, revealed in full once the crux of the cross is reached. I also took the letters INRI (the acronym of the latin phrase IESVS.NAZARENVS.REX.IVDAEORVM - Jesus of Nazareth, King of the Jews), and applied the musical alphabet to the letters. I then utilized the resultant intervals to create a pitch series of fourths and thirds, which serve as the melodic and harmonic basis for the work. (JD)

Joseph Dangerfield (b. 1977) has studied composition with Michael Golden, John Allemeier, Marilyn Shrude, and David Gompper. He earned a Ph.D. in composition from the University of Iowa, and is currently Assistant Professor of music composition and theory, as well as the director of orchestral activities at Coe College in Cedar Rapids, Iowa. Dangerfield's compositions are heard both nationally and internationally, and he is recipient of several awards. In addition, select compositions have appeared on the Albany Records label (The Waves Roll on, Thundering and Shimmering, Troy 882 and 956; and Dreams of Fin, Troy 937) while others are available through European American Music and PIP Press Music Publications.

One of the last of Debussy's compositions, the piece is the third of a projected series of six sonatas for various instruments. Tonal and modal concerns intermix in the opening "Allegro vivo," for as is generally the case with Debussy's oeuvre, common-practice harmonic concerns are not at issue. In fact, a measure of Debussy's stylistic consistency relates to the means by which closure is achieved at the levels of phrase, section, movement, and the complete work, for when no overriding harmonic principles can be assumed, other compositional means must be established for effectively rendering goal orientation. In the opening movement of the sonata, the subtly complex rhythmic interplay of the violin and piano--and more specifically, both with and against each other and the prevailing meter--provides an unnerving propulsive force that abates in the final measures without having wholly resolved the many layers of conflict established in these 5 minutes of music.

The partnership between the violin and piano is made out to be more tenuous in the middle-movement "Intermède" than in either the "Allegro vivo," or the "Finale." Utilizing one of his most common tempo indications, Debussy heads the movement with the instruction Fantasque et léger ("whimsical," or "temperamental and light") and this character comes across in all aspects of the movement, not the least of which being its "choppy" flow attributable to irregularity among the short phrases and sub-phrases, numerous tempo and dynamic alterations, various accentual patterns, and the constant if quirky exchanges of leading and following roles in the violin and piano. The movement might best be characterized as "forever getting underway," as the features just mentioned leave one with the impression of many starts and few compelling conclusions: thus the appropriateness of the progressively slower tempo and steady decrescendo in dynamic intensity in advance of the morendo conclusion ("dying away").

As is true in each of the earlier Cello Sonata (1915) and the Sonata for Flute, Viola, and Harp (1916), the Violin Sonata is a three-movement work exhibiting cyclic qualities, for material of the opening recurs in subsequent movements. The initial violin gesture in the "Finale"--entering in m. 9 only after the piano has established a triple meter--revisits the principal motive from the first movement of the sonata, and sets up a more notable rhythmic conflict with the piano than is the case at the outset of the piece. It is important to note that on its return subtle changes in the motive extend to a level beyond the pronounced rhythmic hemiola, for a slight tonal deflection occurring toward the end of the motive proves to be the propulsive force initiating the extended first section in this peculiar ABA structure. The B section is stylistically cross-referential to a portion of the "Intermede," and thus at one level the "Finale" is a microcosmic projection of events that occur over the complete sonata. And in a reversal of what transpires in the middle movement, the concluding A section of the "Finale" continues to intensify in terms of energy level via increases in tempo, dynamic, and other musical parameters, until the multiple-stopped chords in the violin and the six-octave span between the piano's right- and left-hand gestures are left as the only means of dissipating the tres anime romp of the concluding moments of the composition. (Greg Marion)

Claude Debussy (1862 - 1918). Arguably the most renown of all French composers, Debussy is also one of the most enigmatic. Having been born into a time of great social, political, and economical change, Debussy's music is a mirror for the cultural climate of fin-de-siecle France. Among his best known works are the celebrated Prélude à l'après midi d'un faune (1894), and his single completed opera--there were several aborted attempts at others--Pelléas et Mélisande (1902). To the present all too often regarded as an Impressionist, Debussy's compositional approach was influenced by his avid concern for any number of literary and artistic movements of his day, including Baudelaire's, Mallarmè's and Poe's versions of symbolism.