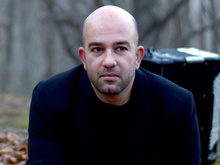 AccordeON – AccordeOFF (2009)
Christos FARMAKIS (b. 1981)
Of two parts, two faces, in which the various sound abilities of the instrument are explored. For the ON side, an insisting rhythm is building up to a full of energy, almost dancing music, followed by the OFF world, where the accordion is breathing out chords created by a simple melody, revealing the lyrical side of the instrument.
Five illuminations (2014/15)
Gundega ŠMITE (b. 1977)
I. Ablaze, unevenly red
II. Airily, transparent blue
III. Dense, tenebrously black
IV. Crystal-clear, quietly radiant, white
V. Thistly, golden
A small circle of miniatures where each of them embodies one colour and a specific character related to it. The piece was commissioned by Panagiotis Andreoglou. Its world premiere took place in Thessaloniki, Greece in May 2015.
L’ Accordéon du Diable (2006)
João Pedro OLIVEIRA (b. 1959)
This work has multiple meanings. It relates to references of devil in the history of music:
Paganini, the “devil’s violinist”;
Tartini who wrote the Devil’s Trill sonata;
The Diabolus in Musica (augmented fourth interval), on which the piece is based.
The idea of the piece and its relation to the listener is to transmit a sense of virtuosity dementia, a vortex of notes and gestures that make an homage to the composers mentioned above. The amplification of the instrument helps to create a more monumental sound and the electronic sounds transform the instrumental sound distorting and expanding it beyond its limits.
The use of unusual sounds in the accordion (breathing, key sounds etc.) tries to transmit the idea of suffocation and extreme tension to the listener.
— Intermission —
Søkk (“Hollow”) (1990/91)
Henrik HELLSTENIUS (b. 1963)
The tape part was made in the electronic studio at the Norwegian State Academy of Music. The piece evolves around five harmonic “hollows” (or Søkk in Norwegian). These hollows are easily identified as the five low pitches that the accordion and the tape reach during the piece. The first hollow ends a long descending harmonic process. Every hollow presents the fundamentals of the harmonic and melodic material that is exposed between them.
The tape and the instrument are exchanging positions toward the harmonic material, sometimes overlapping the same chords, sometimes enlarging the harmonic material. The electronic part is exclusively made from recordings of sounds and pitches from the accordion. Different blending and mixtures between the two is the point of departure for the chamber play between the instrument and the electronic part in the piece. The form of the piece unfolds a gradual process where the two sound-sources go from amalgamation and being merged to contrast and being separated.
The piece is in three parts where the accordion and the tape are closely knit together in the first part. In the second part the accordion grows out of this web on its way towards a solo cadenza. The third part presents the two firstly in a web, then moves into a fragmented play with contrast between the two. Ending in a large unified static harmonic wall.
The Body of Your Dreams (2003)
Jacob ter VELDHUIS (b. 1951)
for piano and boombox
Transcription for accordion: Panagiotis Andreoglou
Jacob TV turned once again to American television, using a cheesy advertisement for a weight-loss product. The presenters enthusiastically demonstrate the Abtronic Pro, an electronic slimming belt, a device whose fine-turned wave transmissions will vibrate fat away: no sweat, no workout! Incorporating elements from rock, jazz and pop culture, the instrumental part follows the soundtrack in great rhythmic precision.

Panagiotis Andreoglou (b. 1980, Greece) focuses on the performance of contemporary music, having given the world premieres of many solo and chamber music works in concerts throughout Europe. Performances of his have been broadcast live by the National Danish Radio and the Greek National Radio and Television.
Panagiotis has studied the classical accordion at the Royal Danish Academy of Music (MMus) and the University of Macedonia (BMus), as well as musicology at the Aristotle University of Thessaloniki (BMus) and the University of Helsinki (Erasmus program scholarship). He has also received the Degree in accordion and the Diploma in piano from the Municipal Conservatory of Kavala, his hometown.
He has won several national accordion and young musicians’ competitions and he has been awarded scholarships during his studies from Denmark and Greece. In Greece, he often collaborates with the Greek Composers Union, the Onassis Cultural Centre, the Contemporary Music Lab of Aristotle University of Thessaloniki and Contra Tempo Chamber Orchestra among others.
Apart from the world of classical and contemporary music, Panagiotis is interested in music for theatre and dance, jazz and improvisation. He has composed and performed music for original theatre and dance productions, collaborating with the theatrical team “Kunst” and the National Theatre of Northern Greece. He also performs with Grigoris Simadopoulos Jazz Trio.
Panagiotis Andreoglou has been awarded the Fulbright Artist scholarship 2016-2017 to implement research on works that combine accordion and electronics at Bowling Green State University, Ohio, U.S.A.
Visit his website at http://www.panagiotisandreoglou.com/