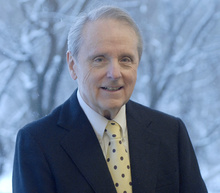 The Center for New Music presents a lecture by

Glenn Watkins’s book, Proof through the Night: Music and the Great War (2003), investigates the variable roles of music during World War I primarily from the angle of the Entente nations' perceived threat of German hegemony. His lecture will explore this issue, largely through the lens of a revived Neoclassicism and the recognition of a new American voice. The lecture will be illustrated by live performances by Stephen Swanson, baritone, David Gompper, piano, Nicha Pimthong and Katie Fang, piano. Technical assistance is provided by Carlos Cotallo-Solares.

Glenn E. Watkins is the Earl V. Moore Professor Emeritus of Music History and Musicology at the University of Michigan and a specialist in the study of Renaissance and 20th-century music.

Serving in the United States Army from 1944-46, Watkins was trained as a Japanese linguist at the Universities of Pennsylvania and Minnesota, and was later stationed in Tokyo with the Allied Translator and Interpreter Section of MacArthur's General Headquarters.

An accomplished organist, he was commissioned by Nadia Boulanger to play the Poulenc Organ Concerto for the composer at Fontainebleau in 1956. His career as a musicologist continued at the University of North Carolina and the University of Michigan, where he taught from 1961-1996.

His first book, Gesualdo: the Man and His Music, with a Preface by Igor Stravinsky (Oxford, 1973, 1990), was a National Book Award finalist. Soundings: Music in the 20th Century (1988), and Pyramids at the Louvre: Music, Culture, and Collage from Stravinsky to the Postmodernists (Harvard, 1994) followed. The first volume to appear in retirement was Proof Through the Night: Music and the Great War (California, 2003), a war in which his own father had served; and his most recent study was a bookend, The Gesualdo Hex with a Preface by Claudio Abbado (Norton, 2010), which traces the composer’s variegated history through the early twenty-first century and positions it within the context of ongoing historiographic debates and controversies.

Watkins's editions of the works of Sigismondo d'India and Carlo Gesualdo have been recorded by numerous international groups, including the Tallis Scholars, the Consort of Musicke, the Hilliard Ensemble, La Venexiana, and Les Arts Florissants. In 2005 he was awarded the Premio Internazionale Carlo Gesualdo and was elected as an Honorary Member of the American Musicological Society.