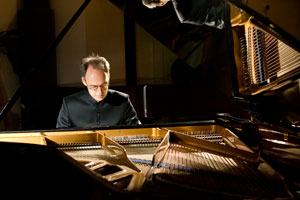 Revelation is approximately 70 minutes in duration without pause

There are moments in every age when a new artistic direction seems to sprout and flourish. We can trace the slow germination and multiple sources that gave rise to it, yet a specific work or artist often comes to symbolize the break with the old. Think of Wagner's Tristan chord, Debussy's Prelude to the Afternoon of a Faun, Schoenberg's Op. 23 Piano Pieces, or Cage's Sonatas and Interludes for Prepared Piano. Each created new possibilities for their day, transforming the musical soundscape far beyond its traditional boundaries. The same can be said of Michael Harrison's music.

This composer, who, like his early mentor, La Monte Young, is deeply influenced by the East, has created an art form that allows the piano to probe territory normally outside of its range: his music exploits the "overtones" generated naturally by vibrating strings -- that is, the series of natural pitches that resonates softly above every "fundamental" tone. Out of acoustical necessity, these are purposely altered (some would say "violated") in the modern piano's tuning. The intricate textures and remarkable effects of Revelation are the result of Harrison's desire to resurrect the pure harmonies that have been lost.

The history of tuning began with Pythagoras and other ancient Greek philosophers, who discovered that the most consonant harmonies are created when two strings vibrate in simple whole number proportions: an octave is produced when the relationship is 2:1; a perfect fifth is the result of tones vibrating in the proportion of 3:2; a pure major third is produced by the proportion 5:4. These relationships are known as “just intonation” (hereafter referred to as “JI”). Michael Harrison returns to this approach, but extends it to numbers beyond those used by Pythagoras and in subsequent historical tunings.

There is a reason that Western music abandoned JI’s pure, enticing sounds: when forced to coexist in a single instrument, they produce a phenomenon known as the “comma” – a dissonant clash. Here is an explanation: A comma is the difference between two intervals with the same name -- a third, for example, or an octave -- that have been arrived at through different means. For example, a major third (Do to Mi) produced by a tuning that has been based on a series of pure fifths (Do to Sol) is wider than one produced by two strings that are in a "pure" major third relationship (that is, one resulting from two strings vibrating in the ratio 5:4). Play these two "major thirds" at the same time and a clash will result.

Therefore, in any instrument with fixed pitches, the strings can be tuned so that they offer consistently pure fifths or consistently pure thirds -- but not both. Attempt to have it both ways, and the keyboard becomes a minefield of dissonances. Western musicians have been avoiding these harmonic collisions for centuries, referring to them as "wolves," because they reminded listeners of the howling of wild animals. Over the course of history, many different approaches to tuning were tried in order to eliminate these inevitable clashes. Our modern tuning, known as equal temperament, does away with them -- but at the cost of losing the purity and color of naturally-produced harmonies.

Instead of avoiding them, Michael Harrison incorporates into his musical texture the clashes that occur when JI intervals confront each other in a piano. However, instead of using commas built on major thirds, Harrison uses what he calls the "Celestial Comma" (a ratio of 64:63) that results from the differences between pure sevenths (7:4 ratio) and pure fifths. In some ways, his vision represents the flip side of Arnold Schoenberg's. Schoenberg broke down conventional harmonic models by "emancipating the dissonance," ordering music through artificially chosen rows of tones rather than through the gravitation of natural tonal movement. Schoenberg freed music horizontally, and Harrison frees it vertically. (Though Schoenberg rejected what had come before and Harrison embraces the distant past; in a way, he has one foot in the ancient world, and the other in the future, since he extends the possibilities of JI well beyond those of its originators.) His music uses harmonies built atop subtle harmonies, with overtones wrestling or reinforcing each other -- often producing a concoction of otherworldly resonances. In other words, Harrison rehabilitates the comma into a newly welcome constituent of the harmonic universe.

The results are often wondrous. In the midst of clouds of dense clusters rapidly drummed in the bass end of the instrument, an astute listener can perceive high ghost tones -- sometimes bell-like, at other times vaporous -- as if a choir of angels were singing along. From Michael Harrison's perspective, the acoustic piano, which had evolved continuously since 1700, has now remained virtually unchanged for 125 years. In each age, composers have transformed the piano according to their needs; and his is the next great step in that development.

A complete performance of Revelation consists of 12 intertwined sections, and lasts about 75 minutes. It was begun in 1999, when the composer was one of four Americans to perform at a festival in Rome (the others were Philip Glass, Terry Riley and Charlemagne Palestine). "The intensive experience of rehearsing and performing my own work, as well as hearing the music of my colleagues was extremely inspiring," he remembers. "As the week progressed, I found myself contemplating the sonic effects that result from working with commas, or very minute, mathematically, and precisely tuned intervals. I woke up on the morning following the last concert with a radical new tuning in my mind. It came to me very clearly, seemingly with no planning or effort, with all of the mathematical proportions worked out in a well-balanced symmetrical configuration. It felt like a gift; however, I am aware that this moment could only have happened as a result of twenty years of working with JI tunings." The resulting work continued to evolve; the present version was 5 years in the making. His original tuning, which can be found on his website, MichaelHarrison.com, uses non-tempered musical relationships in what is technically known as an "extended JI tuning,” and is based on the prime numbers 2, 3 and 7.

Revelation: Music in Pure Intonation is an astounding and exquisite piece. And it may well be one of those seminal works that mark a new direction in musical history. — Stuart Isacoff

__________________________
Stuart Isacoff is a pianist, composer and writer. He is the author of Temperament: How Music Became a Battleground for the Great Minds of Western Civilization (Knopf), and A Natural History of the Piano: The Instrument, the Music, the Musicians—From Mozart to Modern Jazz and Everything in Between (Knopf). Mr. Isacoff is on the faculty of the Purchase College Conservatory of Music (SUNY).

Michael Harrison, composer and pianist, has been called “an American Maverick” by Philip Glass. Through his expertise in “just intonation” tunings, Indian ragas and rhythmic cycles, he has created “a new harmonic world…of vibrant sound” (The New York Times). With a personal style that transcends the ages, his music is both forward looking and deeply rooted in different forms of traditional music. This unique perspective alongside a simple and elegant gift for melody, makes him a composer that can reach audiences of many kinds.

Time Loops CD (Cantaloupe Music), with cellist Maya Beiser, was selected by NPR in the Top 10 Classical Albums of 2012. The feature work Just Ancient Loops (2012), a collaboration with filmmaker Bill Morrison, was premiered by Beiser at the Bang on a Can Marathon and Sundance Film Festival, and screened at film festivals throughout the world. Revelation, Harrison’s first recording for Cantaloupe Music, was chosen by the New York Times, Boston Globe and Time Out New York as one of the Best Classical Recordings of the Year, and received awards from the Classical Recording Foundation and IBLA Foundation. Critic Tim Page wrote, “Say it plainly — Michael Harrison's ‘Revelation: Music in Pure Intonation’ is probably the most brilliant and original extended composition for solo piano since the early works of Frederic Rzewski three decades ago (and no, I am not forgetting Elliott Carter).”

The JACK Quartet premiered Harrison’s new work “Chant” at the Metropolitan Museum of Art in December of 2012, as well as the West Coast premiere at The Da Camera Society of Los Angeles in February of 2013. The Centre Pompidou in Paris exhibited The Bragdon Pavillion, a multi-media collaboration with French artist Loris Greaud, from May-September 2011. As a pianist Harrison has performed his music at the Spoleto Festival, Klavier Festival Ruhr in Germany, Palazzo delle Esposizioni in Rome, American Academy in Rome, Newman Center for the Performing Arts in Denver (with composer/clarinetist Evan Ziporyn), Music in the Morning in Vancouver (with author Stuart Isacoff), Other Minds Festival in San Francisco, and in New York City at Lincoln Center for the Performing Arts, United Nations, Symphony Space, Merkin Concert Hall, Kaufmann Concert Hall at the 92nd St. Y, Wordless Music Series, numerous Bang On A Can Marathons at the World Financial Center, and with Kronos Quartet at Carnegie Hall performing with his mentor Terry Riley on In C.

In the 1980’s Harrison traveled to New York City where he worked closely with La Monte Young preparing all of the specialized tunings and scores for Young's 6½-hour work, The Well-Tuned Piano. In 1987, Harrison became the only other person besides the composer to perform this extended work. In 1986, Harrison designed and created the “harmonic piano,” an extensively modified grand piano with the ability to play 24 notes per octave. Kyle Gann from The Village Voice hailed the harmonic piano as "an indisputable landmark in the history of Western tuning," and the instrument is described in detail in the second edition of the Grove Dictionary of Musical Instruments. Harrison is a disciple of the late Pandit Pran Nath, with whom he studied classical Indian vocals since 1979. He has also performed as a vocalist and on tamboura in numerous concerts and trips to India. Since 1999, he has continued his studies and performs with master Indian vocalist Ustad Mashkoor Ali Khan.

Harrison is the co-founder and president of the American Academy of Indian Classical Music, has taught graduate seminars at the Manhattan School of Music, and was on the faculty of the Bang on a Can Summer Institute at MASS MoCA. Recordings of Harrison’s works have also been released on New Albion Records, Important Records, and Fortuna Records, and chapters are devoted to his work in the books Grand Obsession (Scribner, by Perry Knize), and Temperament (A. Knopf, by Stuart Isacoff). Recent grants and fellowships include the Aaron Copland Fund for Music, Inc. (2012, Time Loops CD), Classical Recording Foundation (2012, Time Loops CD), MacDowell Colony (2012), Djerassi Resident Artists Program (2013), and Ucross Foundation Residency Program (2013).