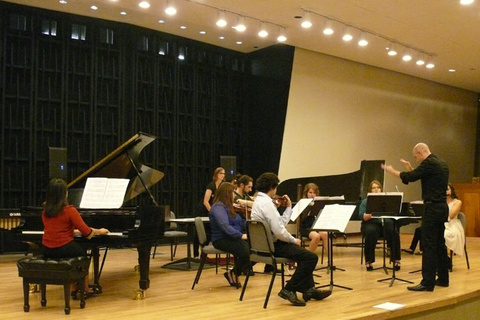 in manus tuas
is based on an earlier motet, in this case that of Tomas Tallis. While there are only a few slices of the piece that reflect exact harmonic changes in Tallis' setting, the motion (or lack of) is intended to capture the sensation of a single moment of hearing the motet as it were by a secular solo cello in a compline service set in a dark candlelit sonorous nave.

Taxidermy
Why “Taxidermy”? I just find the word strangely compelling, and it evokes something grand, awkward, epic, silent, funny, and just a bit creepy — all characteristics of this piece, in a way. The repeated phrase toward the end (“the detail of the pattern is movement”) is a little concept I love trying (and failing) to imagine. It comes from T.S. Eliot’s beautiful and perplexing Burnt Norton (from the Four Quartets), and I’ve used it before in other work — as a kind of whimsical existentialist mantra. 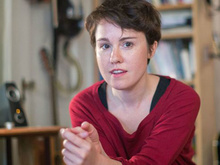 Trained primarily as a violinist from an early age in North Carolina, Caroline Shaw is a Grammy-winning singer in Roomful of Teeth and in 2013 became the youngest ever winner of the Pulitzer Prize for Music, for her enigmatic composition Partita for 8 Voices (also nominated for a Grammy for Best Classical Composition). She will make her solo violin debut in 2015 with the Cincinnati Symphony. She is the inaugural musician in residence at Dumbarton Oaks in the fall of 2014, and she will be the Composer in Residence for two years with Vancouver’s Music on Main. Caroline has also performed with ACME (American Contemporary Music Ensemble), the Trinity Wall Street Choir, Alarm Will Sound, the Mark Morris Dance Group Ensemble, the Knights, Victoire, the Yehudim, and many others.

Effluénces
I wonder how the warp of living memory can affect a musical narrative, which would record the inscription, over time, of the remembered past — e.g. of a musical event — in memorial form. For that purpose, I tried to focus on the moment of recollection and I have envisaged the form as a ‘tree of memory.’ The branches of this ‘tree’ extend in various directions as reconstructions of the past in the light of present, following the tricks memory plays in every step of the way: some of the facts have been switched, others are omitted or added; in some cases, accurate memories are mixed with inaccurate ones and, in other cases, facts are perhaps retained but their source is forgotten.
The pitch structures of Effluénces have been obtained by using algorithmic routines in Super Collider. The routines have been implemented in the frame of the research project Algorithmic Composition in the Context of New Music (2009-10), which took place at the Institute for Electronic Music and Acoustics of the University of Music and Drama at Graz, Austria. Given a limited material as input — usually two or three different ordered pitch cells — linear arrays of cells are formed which are subsequently braided with one another, constantly regrouping into new formations in order to engender inexhaustible variants at the output.
I use algorithmic tools to generate material at a micro-structural and meso-structural level, that is then used for the preparation of instrumental scores. “It takes two to invent anything,” observes the poet Paul Valèry, “The one makes up combinations; the other one chooses, recognizes what he wishes and what is important to him in the mass of the things which the former has imparted to him.” The computer makes up the combinations and I make the choices. 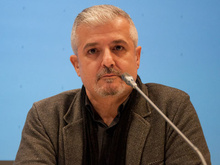 ​Dimitri Papageorgiou was born in Thessaloniki in 1965. He majored in composition with Hermann Markus Pressl and Andreij Dobrowolski at the University of Music and Dramatic Arts at Graz in Austria. From 1998-2002 he held a Presidential Fellowship of the University of Iowa, U.S.A., for a Ph.D. in Composition with Donald Martin Jenni, Jeremy Dale Roberts, and David Karl Gompper. Since 2007, he is appointed as assistant professor of composition at the Department of Music Studies of the Aristotle University of Thessaloniki.
His works have been aired several times by the ÖRF (Austria), the Greek National Radio (3rd Program and 95.8), and several U.S. Radio Stations. He has appeared in festivals and conferences in Austria, Germany, Switzerland, France, Spain, Russia, Greece, Cyprus, Croatia, Turkey and several States of the U.S.A. (NY, CA, FL, MI, IL, IA, OH, GA).
He has received commissions by several institutions and ensembles, such as SCI/ASCAP (U.S.A.), Institute for Electronic Music and Acoustics of the University of Music and Drama at Graz, Austrian National Radio and Literature Forum Graz, Thessaloniki Concert Hall, Ensemble Interface (Germany), Zeitfluss Ensemble (Austria), UMS & JIP (Switzerland), Trio IAMA (Greece), Ensemble Etcetera (USA), etc.
In 2008 he was composer-in-residence at the festival 4020.mehr als Musik Linz and in 2006 the Minoritensaal Graz programed Papageorgiou's composer's portrait. In summer 2012, his work "Effluences" has been heard at the 46th International Summer Course for New Music Darmstadt and in March 2013 Klangforum Vienna performed his work In the Vestige of the Present at the Vienna Konzerthaus.
He appeared in the discography in 2005 with the CD "Musing" by Capstone Records, NY, featuring his work "...d'ogne luce muto". In 2009 his work "In the Vestige of the Present" appeared on the CD "Present Perfect, Vol. 1" by Trio IAMA, which was released by Dissonarnce Records.
He is the co-founder of the dissonart ensemble the first non-state sponsorded new music ensemble in Greece.

Sixty Cycles
I originally planned this piece to celebrate a friend’s sixtieth birthday. Its basic structure was born of my thinking about life’s phases and the frequent disjuncture between experienced time and the temporal grids we use to organize our lives (years, months, days…). Over the course of the piece, several different, albeit not equally distinctive, musical materials are channeled through 60 “phrases” of equal length. These structural zones are each ten beats long—the fixed temporal grid—but they vary in perceived and often clock duration through tempo fluctuations and according to the activity and density of the materials that “inhabit” them.     Each phrase has a focal note that is a component of the harmonic series of a 60 Hz (i.e., 60 cycle) fundamental. The cello’s lowest string is tuned to this low B¼-sharp. The partials of the series—often shifted in register out of necessity—are presented in (nearly) linear descending order. No attempt is made to reference the familiar sound of 60-cycle electrical hum, however; its ubiquity is conceptual.     The cello part requires extremely subtle control and virtuosity. The performer explores and struggles with the instrument as if trying to make sense of its capacities, seeking perhaps—or trying to regain?—the ability to play with conventional beauty, and uncovering other beauties in the process. In the first half of the piece, for example, a substantial amount of the material is fingered not only in the instrument’s highest, less-exploited reaches, but also often on the “wrong” side of the bow. Similar extensions of traditional sound production arise through instability/variability in the way the bow contacts the string, widespread use of left-hand pizzicato, and the significant presence of high harmonics and “multiphonics”, sound objects akin to woodwind multiphonics that consist of simultaneously produced harmonics on a single string.     This piece was composed for the prodigious talents of Kevin McFarland, with the generous support of the Isabelle Zogheb Foundation in Berne, Switzerland. It is gratefully dedicated to one of my earliest mentors, the Swiss composer, pianist, conductor, teacher and new music champion, Jürg Wyttenbach. 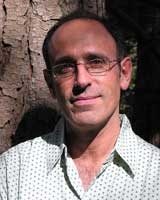 The music of American composer Joshua Levine (b. 1959 in Oregon) has been commissioned and performed by prominent new music soloists and ensembles in venues ranging from IRCAM and the Cité de la Musique in Paris to Merkin Hall in New York, from festivals in Melbourne and Los Angeles to the World New Music Days in Stockholm. His tape piece, Tel, was awarded First Prize (1987) and a Euphonie d’0r (1992) at the Bourges International Electroacoustic Music Competition. Recordings of his works have been broadcast internationally and released on the harmonia mundi and New Focus labels.
Following classical guitar studies in Basle, Switzerland, Levine’s focus shifted to composition under the tutelage of Balz Trümpy. Further studies took him to the Paris Conservatory (1985-86 with Guy Reibel) and IRCAM. He worked for several years in Europe as a free-lance composer and guitarist in such noted new music ensembles as Contrechamps before earning his Ph.D. at the University of California, San Diego under the primary mentorship of Brian Ferneyhough. From 2000-08, he lectured in composition, electronic music, and music theory at San Francisco State University, and was subsequently appointed Assistant Professor of Composition at the Oberlin Conservatory of Music. He has also taught composition at UCSD and Stanford University, as composer-in-residence at the soundSCAPE festival in Italy, and in master classes across the U.S.

Lichtbogen
The title for this work stems from the composer's experience of seeing the Northern lights whilst starting work on writing the piece, this experience also shaped the form and language of the piece. Lichtbogen was the first time Saariaho had worked with a computer in the context of purely instrumental music, this new compositional element led to harmonic material being created by analysing short transitions played with a violin and cello, starting with artificial harmonic sounds and ending up with complex multi-phonic sounds.
The rhythmic elements of this piece were created using a network of computer programmes, allowing the composer to construct interpolations and transitions for different musical parameters, rhythmic interpolations created through sets of musical patterns that are repeated but each time slightly modified in character.

​Kaija Saariaho is a prominent member of a group of Finnish composers and performers who are now, in mid-career, making a worldwide impact. Born in Helsinki in 1952, she studied at the Sibelius Academy there with the pioneering modernist Paavo Heininen and, with Magnus Lindberg and others, she founded the progressive ‘Ears Open’ group. She continued her studies in Freiburg with Brian Ferneyhough and Klaus Huber, at the Darmstadt summer courses, and, from 1982, at the IRCAM research institute in Paris – the city which has been most of the time her home ever since.
At IRCAM, Saariaho developed techniques of computer-assisted composition and acquired fluency in working on tape and with live electronics. This experience influenced her approach to writing for orchestra, with its emphasis on the shaping of dense masses of sound in slow transformations. Significantly, her first orchestral piece, Verblendungen (1984), involves a gradual exchange of roles and character between orchestra and tape. And even the titles of her next, linked, pair of orchestral works, Du Cristal (1989) and ...à la Fumée (1990) – the latter with solo alto flute and cello, and both with live electronics – suggest their preoccupation with colour and texture.
Before coming to work at IRCAM, Saariaho learned to know the French ‘spectralist’ composers, whose techniques are based on computer analysis of the sound-spectrum. This analytical approach inspired her to develop her own method for creating harmonic structures, as well as the detailed notation using harmonics, microtonaly and detailed continuum of sound extending from pure tone to unpitched noise – all features found in one of her most frequently performed works, Graal théâtre for violin and orchestra or ensemble (1994/97).