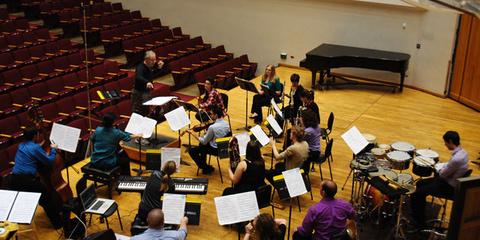 at The University of Wisconsin, Madison

C'è la Luna Questa Sera? [Is There a Moon Tonight?]

was inspired by the moonlight reflected on the surface of Lake Como. After spending a lovely and productive month at the Bellagio Rockefeller Center in 1997, my memories of the evenings there revolve around standing out on the veranda and watching the moonlight dance off the water. Surrounded by the dramatic views of the Dolomite Mountains to the east, and the Alps to the north, the setting was magical, yet mysteriously enigmatic at night, as the purple hue of the Dolomites gave the surrounding visual frame a dark aura of ambiguity. The other side of the Dolomite Mountains was visible only when there was a full moon, and even then the color lent an almost ethereal ambience to the scene. The work was originally for violin, cello and percussion and was transcribed specifically for the Lincoln Trio, to which this version is dedicated.

The first composer to win the American Academy in Berlin Prize, Laura Elise Schwendinger, is a Professor at UW-Madison. Her music, described as "evok(ing), serene mystery and infinite beauty" (Fanfare), "evince(ing) an acute sonic imagination and sure command of craft." (Chicago Tribune), "darkly attractive, artful and moving…" (NYT) and "shrewd composing, the genuine article. Onto the 'season's best' list it goes." (Boston Globe) has been performed by leading artists of our day including Dawn Upshaw, Janine Jansine, Matt Haimovitz, the Arditti and Jack Quartets, Trinity Choir, the Franz Liszt chamber orchestra and the American Composers Orchestra, at venues including Carnegie Hall, the Kennedy Center, Wigmore Hall, the Berlin Philharmonic, the Théâtre du Châtelet, the Ojai, Aspen, Tangelwood and Ravinia music festivals, and Off-Broadway in the acclaimed Sounding Beckett project. Her honors include a those from the Guggenheim, Rockefeller, Fromm and Koussevitzky Foundations, the Radcliffe Institute, two from the American Academy of Arts of Arts and Letters (including a Leiberson Fellowship given to "mid-career composer of exceptional gifts"), the Harvard Musical Association, Chamber Music America, the MacDowell, Yaddo and Bogliasco Colonies and first-prize of the ALEA III Competition. Upcoming performances by the New Juilliard Players, Lincoln Trio, JACK Quartet and Matt Haimovitz's Ucello Ensemble. CDs of her work will be released on Centaur and Albany this coming year.

is a dialogue between the solo oboe and subtle electroacoustic treatments. Each of the three sections of the piece explores different relationships between the instrument and the electronics. The work was commissioned by Ecole Nationale de Music du Pays de Montbéliard (France) and first performed during the festival "Nuie bleue" Besançon (France) by Christian Schmitt.

In May 2003 he completed a doctorate (PhD) with Professor Dr. Jonty Harrison at the University of Birmingham. During the spring term 2003 he was the "Edgar Varèse Gast Professor" at the TU Berlin. Since September 2004 Tutschku has been working as composition professor and director of the electroacoustic studios at Harvard University (Cambridge, USA). He is the winner of many international composition competitions, among other: Bourges, CIMESP Sao Paulo, Hanns Eisler price, Prix Ars Electronica, Prix Noroit and Prix Musica Nova. In 2005 he received the culture prize of the city of Weimar.

was commissioned by the Spectra Ensemble in Gent (Belgium), and first performed in March 2008. While the title refers to the Spectra Ensemble, the harmonies are also derived from spectra. However these are 'fictional' spectra: the spectra are distorted or hybrids, a combination of multiple spectra. More importantly, the duration and timing of the spectra create another dimension upon which the form of the composition is built. This idea: that the form is not only supported, but also directed by the underlying harmonies is an important characteristic of this composition. Of course, many other parameters contribute to the form in various ways, and all together is creates a rich variety in the musical textures.

Spectra is dedicated to Filip Rathé, the conductor of the Spectra Ensemble.

Bert Van Herck is Visiting Assistant Professor at the University of Iowa. He holds a PhD from Harvard University where he studied with Magnus Lindberg, Julian Anderson, Chaya Czernowin, Brian Ferneyhough, and Helmut Lachenmann. With Hans Tutschku, he studied electroacoustic music. In the fall of 2006 he was an exchange scholar at Columbia University, working with Tristan Murail.

His compositional interests include large ensemble and orchestra, electro-acoustic, and microtonal tunings. Recent performances include Sept Chansons and Spectra at the ISCM World New Music Days, Formes Fluides at the Huygens-Fokker Foundation for microtonal organ, and Inner Friction for flute and electronics at the EMM Festival by flutist Rebecca Ashe.

"Talea," in Latin, means cutting. In medieval music this term designates a reiterated rhythmic pattern to which a configuration of pitches called "color," likewise reiterated and coinciding or not with the first, is grafted. In the twentieth century we have rediscovered this dissociation between pitches and durations. The idea of a "cutting" of the initial idea, of putting the various rhythmic structures in phase and out of phase, as well of a structure in two parts in which the second could easily be termed "color", have suggested the title of this quintet to me.

In Talea, I tackle two aspects of musical discourse from which my research on instrumental synthesis, on micro-phonics and on contiguous transformations had estranged me, that is, speed and contrast. Talea consists of two parts linked together without interruption that express two aspects or, more precisely, two auditory angles of a single phenomenon. Thus this single gesture (fast, fortissimo, ascending - slow, pianissimo, descending) is presented in the first part by durations of medium length and gradually eroded to the point of leveling off the contrasts. In the second part, it expresses the overall form and the succession of sequences. It is polyphonic in the first part and homophonic in the second.

From the perceptual point of view, the first part seems to me like an inexorable process, a veritable machine for forging the freedom, which will emerge in the second part. The course of the latter is in fact pierced by more or less irrational emergences, kinds of recollections from the first part, which gradually assume the color of the new context until they become unrecognizable. These wild flowers, these rank weeds pushing up in the interstices of the machine, grow in importance and then overflow until they give the sections unto which they have wormed their way like parasites an entirely unexpected coloration.

Upon completing his studies at the Paris Conservatory in 1972, having studied with composers Olivier Messiaen and Henri Dutilleux, Gérard Grisey (1946-1998) won the coveted Prix de Rome and founded, with fellow composers Tristan Murail, Michaël Lévinas, Hugues Dufourt, and Roger Tessier, a contemporary music ensemble known as l'Itinéraire. This ensemble, and the composers associated with it, became the driving force behind the establishment of an attitude towards composition that has come to be known as spectral music.

Any vibration, according to the work of French mathematician and physicist Joseph Fourier, may be analyzed as the interaction of a number of individual sinusoidal frequencies. In music, this property is evident in the phenomenon of overtones or partials that combine in particular ways to create a sense of timbre. Groups of overtones and their relationships (specifically their relative frequencies and intensities) are known as spectra, and translating these spectra into musical sonorities provides composers with tools for the isolation and manipulation of timbre as the basis for the interaction of musical forces. Spectral composers use these "spectra" along with the refined capabilities of sonic analysis available through modern technology to construct compositional models that are founded on the innate properties of sound.

Due primarily to the use of spectra as compositional models, the term "spectral" has come to be the standard label associated with this music. However, most of its founders have abandoned this term as an overly reductive characterization of a broad aesthetic preoccupation with exploring how the innate properties of sound may be translated into musical processes. Grisey was often at the forefront of this opposition, proposing instead the term "liminal" as a more appropriate label for this attitude towards composition.

Liminality, in the sense of the threshold between two perceptual phenomena, can be seen on every level of a spectral composition. Through its mimetic nature, spectral music in general, and the music of Gerard Grisey in particular, explores the regions between the conception and perception of one-dimensional timbre and multi-dimensional harmony, exact frequency and approximate pitch, precise duration and rhythmic subdivision, and the gradual evolution of musical processes and the precise articulation of musical form.

In order to refine and develop his particular attitude towards composition, Grisey pursued studies in acoustics with Emile Leipp at the Paris VI University in 1974 and further training in acoustic research at IRCAM in 1980. In 1982, Grisey accepted a position at the University of California, Berkeley as a professor of music theory and composition. In 1986, he left Berkeley to teach composition at the Paris Conservatory, a post he held until his death on November 11th, 1998 at the age of 52.  — Christopher Gainey