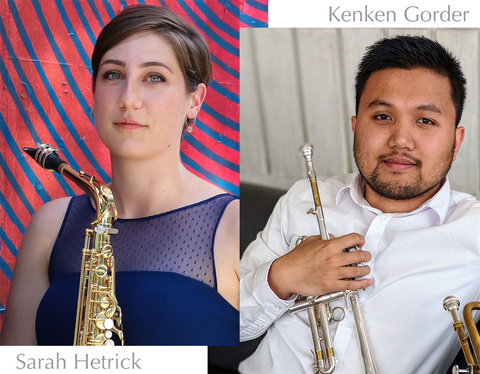 for soprano saxophone & electronics
Highwire features the saxophone as a carrier for soaring melodic lines. While my piece seeks expression within this traditional view of the instrument, I also wanted to explore the saxophone’s unique ability to color the same note in many different ways. Here, a simple melody is intensified by a full range of techniques, from subtle fingering changes to distortion effects made with the reed position.
In much of my artistic practice, I investigate musical details in a visual/ tactile way. In addition to the notions of shading a note, I also sought to create drama through texture. The electronic component in this piece essentially perforates the melodic line, mimicking the pulsations created through instrumental techniques. Rather than altering the sound itself (by changing the pitches, for example), the computer generates a series of little “windows” that allow sound to come through at varying rates. The results range from a very tight tremolo to powerful echoes that intersect with what is being played. In addition, a few pre-recorded samples provide a larger harmonic and timbral context for the soloist. These effects— both acoustic and electronic— create a melody that unfolds in a single direction, and seemingly, with a singular mission. –Tonia Ko

for trumpet & electronics
Live in the moment; Live in the breath was written for Sam Wells, and premiered at the 2015 SPLICE festival in Kalamazoo, MI. When I was asked to write this piece (my first for solo wind instrument), I immediately was drawn to the power that the breath has for this type of performer. Their breath empowers them to do amazing things with the instrument, just as our breath empowers all of us to do amazing things with our lives if we learn how to harness it. This piece focuses on the con- nection between our breath and the greater natural world around us, and begs the listener to always live life to the fullest and make the most out of the time they have here on this earth. -Brian Sears

for trumpet, saxophone*, and fixed media
CLOSE FIGHT for trumpet, trombone (ad lib) soundtrack and video was written in 2014 for Stephen Burns with financial support from the FPK. It is based on interviews with 2 boxers after a match that took place June 22, 2013 at the Barclays Center in Brooklyn, New York. WBA welter weight champion Paulie Malignaggi, hailing from Brooklyn, New York, defended his title against Adrian “The Problem” Broner, from Cincinnati, Ohio. -Jacob TV
*For this performance, the trombone part will be played by saxophone.*

for two instruments and live electronics
you speak lies into my mouth was a collaborative effort between Nathan Nokes, Wilson Poffenberger, and Sarah Hetrick. It was recently performed at the 42nd International Saxophone Symposium in Phoenix, AZ. It was originally written for two saxophones and electronics. This evening, you will hear the piece performed with saxophone, trumpet, and electronics.

for chamber ensemble
The inspiration for Michael’s Spoon was this text from the end of J.M. Coetzee’s 1983 novel The Life and Times of Michael K.
"And if the old man climbed out of the cart and stretched himself (things were gathering pace now) and looked at where the pump had been that the soldiers had blown up so that nothing should be left standing, and complained, saying, ‘What are we going to do about water?,’ he, Michael K, would produce a teaspoon from his pocket, a teaspoon and a long roll of string. He would clear the rubble from the mouth of the the shaft, he would bend the handle of the teaspoon in a loop and tie the string to it, he would lower it down the shaft deep into the earth, and when he brought it up there would be water in the bowl of the spoon; and in that way, he would say, one can live."
Michael’s Spoon was originally written as an all-electronic piece which is the second movement of the five-movement piece The Garden of Cyrus. That piece was released on my 1998 CD, Overstepping. Michael’s Spoon is part of my ongoing project, A Book of Days. –Eve Beglarian

for indeterminate instruments and electronics
Light Heartbreak - For this evening’s performance, you will hear the piece performed by saxophone, trumpet, and live electronics.

open instrumentation
Tierkreis - In 1975, 12 melodies were composed for the work MUSIK IM BAUCH (Music in the Belly) for 6 percussionists and music boxes, one for each sign of the zodiac.
I began to busy myself with the 12 human characters of the ZODIAC of which I had until then only a vague idea. In inventing each melody, I thought of the characters of children, friends, and acquaintances who were born under the various star signs, and studied the human types of the star signs more thoroughly. Each melody is now composed with all its measures and proportions in keeping with the characteristics of its respective star sign, and one will discover many legitimacies when one hears a melody often, and exactly contemplates its construction . . . Each melody is composed in such a way that one should play it at least 3 times. When one wishes to listen to several or all of them one after another, then each should be played 3 or 4 times in succession. -Karlheinz Stockhausen 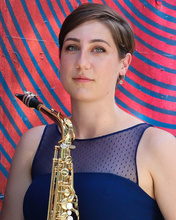 Sarah Hetrick, a Pennsylvania native, is a saxophonist, educator, and arts administrator based in Austin, TX. Aside from teaching in the Central Texas area, Sarah enjoys maintaining an active performing career as a solo and chamber musician in Texas and throughout the United States.
Sarah performs regularly as a member of the Density512 new music collective and has commissioned and worked with composers Angélica Negrón, Tonia Ko, Gemma Peacocke, Alexandra Gardner, Andrew Koss, Shelley Washington, Alexis Bacon, Evan Lawson, and more. Sarah has presented and performed at the The Oh My Ears Festival, with the Blackhouse Collective, and at several national and international conferences including the International Saxophone Symposium, the North American Saxophone Alliance Regional and Biennial Conferences, and the Boulanger Initiative's WoCo Fest. Additionally, Sarah has given recitals and masterclasses at several high schools and universities, including Duquesne University, Youngstown State University, and more.
Sarah is a prize winner of the ENKOR International Music Competition, the North International Music Competition, both the Texas and Pennsylvania MTNA Young Artist Competitions, the Butler Symphony Orchestra Young Artist Competition, and more. Additionally, Sarah is the recipient of the prestigious and internationally competitive PEO Scholar Award, the Presser Graduate Music Award, and the Rainwater Grant for Innovation in Music.
As director of the Elise Hall Competition for Emerging Saxophonists, Sarah oversees the commission, operations, and development of the initiative, which aims to encourage and support the professional and artistic development of young female, trans, and non-binary identifying saxophonists.
Prior to pursuing doctoral studies and serving as the Saxophone Teaching Assistant at The University of Texas at Austin, Sarah earned a Bachelor of Science Degree in Music Education and graduated Summa Cum Laude from Indiana University of Pennsylvania, a Master of Music Degree in Saxophone Performance from The University of Texas at Austin, and completed additional study at Université Européene de Saxophone in Gap, France. 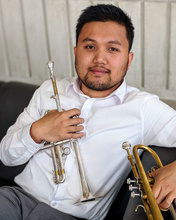 Kenken Gorder, is a highly versatile trumpeter and music educator based in Austin, TX. His skill and expertise have allowed for opportunities to perform in a multitude of ensemble settings including sinfonietta, brass quintet, brass trio, orchestra, wind ensembles, and jazz bands. He enjoys collaborating with both musicians and artists in all the artistic disciplines.
Kenken is an active member of the Density512 and Black House music collectives. This year, he has performed and premiered new works for both collectives at the 2020 Oh My Festival in Phoenix, AZ, and in Austin’s (TX) Big Medium gallery. As an educator, he maintains a large studio of 58 students in Austin and the surrounding area. Students of his have performed at the regional, state, and national levels.
As a performer of new music, he has premiered 16 new compositions by composers within the span of 2-months at the 2019 Oh My Ears Festival in Phoenix, AZ and the 2019 Black House SoCal Intermedia Workshop in Irvine, CA. He also performed music by Sam Wells at the 2019 SPLICE Institute in Kalamazoo, MI. Additionally, he collaborated and recorded an album with François Minaux, an artistic genius and flutist, based in Austin.
Gorder has also commissioned and premiered works by composers Jacob Pallo, Andrew Koss, Tyler Katz, and Helen Hé in 2014, 2016, 2017, and 2019 respectively. Outside of performing new music, he has performed with the Altoona Symphony Orchestra, Muscatine Symphony Orchestra, the HoodleBug Brass Quintet, and the Iowa Brass Quintet. Kenken was a semi-finalist in the 2012, 2017, and 2018 National Trumpet Competition, and a performer at the 2017 and 2018 International Trumpet Guild Conferences. He also served as an ensemble coach at the Interlochen Center for the Arts.
Kenken Gorder earned his Master’s degree in Trumpet Performance studying under the tutelage of Dr. Amy Schendel at the University of Iowa (UI). Prior to his time at UI, he earned a bachelors of science degree in music education from Indiana University of Pennsylvania (IUP). Previous trumpet teachers include Dr. Kevin Eisensmith, Ken Brader, and Kyle Fleming.
For more information, visit: www.kenkengorder.com
Email: kenkengorder1@gmail.com | Cell Phone: (724)-840-8695