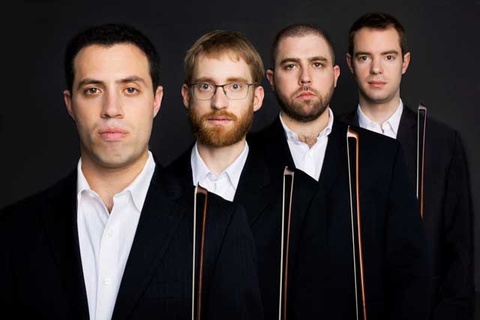 Abrade
Joshua MARQUEZ [BIO]
Abrade juxtaposes, collides, and convolves the transients and resonance of tap dance. I gathered source material by tap dancing on a resonant, wooden platform and performed a spectral analysis on the recordings. Through contrast and interpolation, the material weaves a non-linear narrative from the nexus to the decay of sound. By re-contextualizing the order (i.e. the decay beginning the gesture), the actual sound is brought into question – does it still resemble the source material?  Through abstraction, the source material becomes less rendered.
Vexatious
Joungmin LEE [BIO]
Agony can exist for a number of reasons. Mine is coming from obsession, when it is gone, agony may vanish. The piece is an attempt to express agony, obsession, and serenity. The first two measures represent the main motive, which is illustrating agony. The motive develops in order to discover different angles of obsession as the conceptual and musical elements.  To emphasize the idea of obsession, main motive is developed with regard to function as the main idea or a harmonic figuration for farther musical elements, to highlight the deep level of agony as a part of human insight. Technically, the concept of agony is realized by using a mixture of extreme range variety and micro-tonality, to add a further level of psychological complexity. Toward the end, both agony and obsession are transformed into the unity. This is the time that the heart accepts them in order to embrace the serenity.
Selig Sind
Jared HEDGES [BIO]
I often struggle to express my feelings on hearing certain pieces of music. For some such pieces it seems insufficient to study, write about, praise, or even play them, that none of these responses quite get across the intimate musical experience they give to me. For several years now, Brahms’s German Requiem has proven to be one such piece in my life. I remember vividly the first time I heard it, feeling overwhelmed (for lack of a better word) by the initial entrance of the choir, so piercingly tender, so precisely setting the essence of the text. While I have no delusions of touching the beauty of what Brahms composed, I wrote this string quartet in an effort to echo my experience of his music, and perhaps to more closely express the feelings that those few bars of the Requiem prompt in me as a listener.

EQUILIBRIUM
Nima HAMIDI [BIO]
A state in which, opposing forces are balanced. In other words, the condition of a system exists in such a way that all-competing influences are stabilized, in a wide variety of contexts. EQUILIBRIUM is an attempt to reconstruct a similar situation. The concept of creating a stable unit, using unstable elements, is a feature of this work. Recently I’ve been experimenting with several unstable musical elements including timbre, rhythm, and dynamics, and more specifically, the concept of timbral instability. The notion is influenced by a unique performing practice in traditional music of the Middle East, which reflects an expressive bowing system. Several features including the random positions of bowing, dynamics, and a flexible left hand finger pressure combined with drastic textural changes, range transformations, and a variety of sounds fields all provide unstable states of equilibrium. In order to balance these features, the composition is constructed carefully using proportional relationships, developmental processes, smooth transformations, and careful temporal considerations. EQUILIBRIUM is an auditory experience that tries to compare a stabilized moment along side an extreme number of unstable musical ideas.
Dissolution Parade
Jake SIMMONS [BIO]
Dissolution: The process of dissolving into parts or elements – the undoing or breaking of a bond – death; decease – a bringing or coming to an end; disintegration; decay; termination. Parade: a successive display of things – to exhibit – an array. Dissolution Parade is an exploration of transformation through registral shift and the process of dissolution. From a state of relative suspension, unity, and minimal activity, a descent begins. As development occurs, voices begin to fracture apart – independence increasing primarily through rhythmic development, registral position, and the introduction of new pitch collections. All pitch collections are derived from the first via expansion by various ratios. Likewise, interruptive elements are related proportionately; functioning as a contrasting component to an otherwise interminable texture, and outlining registral boundaries, indicating the initiation of transformation as well as the arrival of a dissolutive state.
Intra-Diffusing
Joe NORMAN [BIO]
Intra-Diffusing is an examination of fluctuating states and juxtaposition, and the irrevocability of transformation. Extreme fragmentation and timbral diversity give way to undulating waves of stabilization and unification, in attempts to return a perpetually transitory pitch language to its origin. Vulgarity interjects and intermingles in order to obscure and obstruct the clarity of transformation. The diffusion of complexity into focus in undermined. The re-centering that attempts to rectify the disbursal of musical material results in a perverse denial of repose.