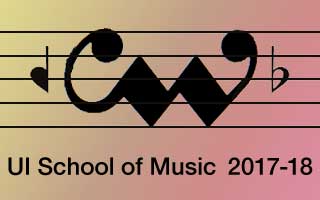 Andrew Willette and Guillermo Najarro, violins
Margaret Allen, viola
Sasha Wemmie, cello
Disquietude attempts to reflect the raw emotions of uneasiness and anxiety. As a result of this inspiration this piece became an exploration of ordered states and disordered states. Throughout the piece we explore transformations from a united state of sound to a state of deviation of musical ideas, rhythmic syncopation, density of sound, & the isolation of silence.
Bernard Short (b. 1979, Harlem, NYC) was raised in Far Rockaway Queens, NY; he earned a BA in music with a focus in composition at Morehouse College in 2007, and a Masters in Music Education at The University of Georgia in 2012. He is currently in the PhD music composition program at the University of Iowa. He was awarded a Dean’s Fellowship, currently; he is working as a research assistant for the Center for New Music, and is studying with Lawrence Fritts and David Gompper.
From 2008-2014 he was the Director of Bands and Orchestra at Cross Keys High School in Atlanta, GA. While Director, he was responsible for the rebirth of both programs, which are thriving today, and the programs awarding of Grants from many organizations, which helped fuel his success; including one from The Grammy Organization. In 2015, he received a commission from The Julien Chamber Winds Ensemble at The University of Dubuque. In 2017, he was commissioned to compose a piece to have its world premier in Mykonos, Greece at the Delian Academy for New Music’s International Summer Academy for Composers and Sound Artists. To Bernard, music is the expression of a person’s soul that is best used as a way to communicate with someone without allowing words to obliterate the message.

Allyson Kegel, oboe
Melanie Long, clarinet
Bethany Wheeler, harp
20th century Iranian poet, Ahmad Shamlou (1926-2000), depicts somebody in this poem (probably the one to whom the poem is dedicated) at an old, quiet house on a warm midday. There is an abstract sense of nostalgia and homeland. The poem consists of three main parts. The first two of them share a closing verse. In the third part, there can be found a lexical development based on what is heard/read in the first two parts. Its closing verse references the first two but is transformed. The music neither follows the poem’s structure strictly nor embellishes it.
Ramin Roshandel (b.1987) started studying the setar (an Iranian classical music instrument) at the age of 14. He completed his Bachelor’s in Iranian Music Performance at the Tehran University of Art, and his Master’s in Music Composition at the University of Tehran. He is currently in the first year of his Ph.D. in composition at the University of Iowa, working with Josh Levine.

Lou Barker, violin I
Tori Cassady, violin II
Anj Droe, viola
Andy Swiston, cello
"snapshots" started with many sheets of paper and on each was a separate snapshot of what the larger piece could be. Upon being combined, each small snapshot aggregates to create one larger, panoramic picture.  Most of what I composed was a framework for improvisation and much of the musical surface is determined by the performers choices and discretion.
Anastasia Scholze is in the first year of her undergraduate degree at the University of Iowa as a vocal performance major. She is currently studying composition with Jeremy Maas.

Benjamin Wolfe, countertenor
stereo fixed media
From the perspective of three characters this piece reflects on different aspects of the armed conflict in Colombia mixing facts occurred along the last 80 years.
The X Train
Carlos Toro-Tobón, a composer born and raised in Colombia, received his MA degree in composition from the Universidad EAFIT in 2011. Since 2005, he has been a professor of music theory and composition at the Universidad de Antioquia, Colombia, where also coordinated the music education program. In 2014 Carlos Toro-Tobón was granted a Fulbright scholarship to study in the U.S., and is currently pursuing a Ph.D. in music composition at the University of Iowa.     His composition teachers have been, Andrés Posada S, Moisés Bertrán, Marco Alunno, Lawrence Fritts, Nomi Epstein, and Josh Levine.

Maeve McGonigal, flute
Christine Burke, clarinet
Paul Downing, percussion
Hongwei Cai, piano
Jenna Ferdon, violin
Will Yager, double bass
Carlos Cotallo Solares, conductor
Within the rigid and static sections (or scenes), foreign actions appear, ultimately overpowering the initial material. These actions are obscene in the etymological sense, meaning that they do not belong on stage. The hierarchy shift is eventually questioned, since the seemingly rebellious actions are reabsorbed into the original structure.
Carlos Cotallo Solares (b. 1989) is a Spanish composer. His work deals with subjects such as the relationship between music and language, quotation, and meter and tempo polyphony. His pieces often focus on a single concept or technique that is interpreted in multiple ways.
Carlos is currently pursuing a PhD in composition at the University of Iowa, completing previously a Master's degree at the Universität der Künste in Berlin and a Bachelor's degree at the Hochschule für Musik Freiburg. He works as a teaching assistant in music theory and composition and is one of the organizers of the concert series iHearIC.

The Way Life is

Kate Weldon, flute
Lauren Laven, piano
"The Way Life is" is a short duet between flute and piano. While the main theme is something I plucked out on a piano almost two years ago, nearly the entire rest of the piece was written over a very short period of time. Seeing as this is the first piece I have written for live musicians, I am very glad to have had the opportunity to work with Kate and Lauren and I cannot thank them enough.
Jack Simpson is currently a freshman at the University of Iowa studying vocal performance under Professor Stephan Swanson and composition under Carlos Cotallo Solares.

Samuel Cho, tenor
Hongwei Cai, piano
A man is in uncertainty. He prays again and again for having certainty. However, the more he prays, the more he doubts existence of god. I am not sure, I am not sure, I am not sure…
Jinwon Kim is a Korean composer. He is currently in a Ph.D. program in composition at The University of Iowa, school of music. Jinwon holds the Master of Music degree in composition from the University of Arizona. Jinwon Kim studied composition with Josh Levine, Daniel Asia, and Seil Oh. His music has been performed in South Korea, Japan, and the United States.

Greta Larget, voice
Gustavo de Carmo, piano
The inspiration for A Winter’s Tale came from a poem by David Herbert Lawrence with the same title. The imagery in the words of two people never meant to be together and the depiction of the wintery scene guided the piece to have a unique interplay between the piano and voice, with each part emulating both the falling of snow and the separation of two lovers.
A Winter’s Tale

Yesterday the fields were only grey with scattered snow,
And now the longest grass-leaves hardly emerge;
Yet her deep footsteps mark the snow, and go
On towards the pines at the hills’ white verge.

I cannot see her, since the mist’s white scarf
Obscures the dark wood and the dull orange sky;
But she’s waiting, I know, impatient and cold, half
Sobs struggling into her frosty sigh.

Why does she come so promptly, when she must know
That she’s only the nearer to the inevitable farewell;
The hill is steep, on the snow my steps are slow—
Why does she come, when she knows what I have to tell?
Greta Larget is a first-year undergraduate student at the University of Iowa, currently pursuing a BM in Vocal Performance and a Certificate in Writing. She has taken composition lessons this past semester under the instruction of Zachery Meier.

Dana Mietus, viola
Inspired by a unique shadow made by a tree on a particularly sunny February day, Overcast is the exploration of the function of melody and stability in music. A melodic line is introduced over the balancing of a drone while the performer demonstrates how the interpretation of the line can change without the note moving. As the melody is interrupted it evolves, a reminder that--like a shadow cast by the sun--it is only temporary, a glimpse of the many forms it takes before the moment dissipates.
Lucas Preuth is an undergraduate at The University of Iowa studying both English and Philosophy. He spends his time reading, writing, and composing music, and he hopes to graduate college with the skills necessary to find a job where he can gleefully employ all three of these hobbies.

Benjamin Wolfe, countertenor
Sabrina Gafrick, percussion (tubular bells, snare, crash)
The feeling of loneliness can be amplified by juxtaposing nature's stark presence with a single individual. Even the most miniature details can lead to a sudden realization of the difference between the two and lead a person to desperately desire familiarity.
Andrew Novitskiy is an undergraduate composer in his Senior year. He has studied with Nima Hamidi and is currently studying with Jean-Francois Charles. He has had works premiered by The JACK quartet, The Laptop Orchestra of the University of Iowa. He has participated in various composer workshops, along with the 24 + 24 concert. He has written for a large variety of instruments and enjoys finding new timbres to express and create new musical ideas.

Entrance at the End

Christine Burke & Zachery Meier, wine glasses
electronics
As with much of my recent work, Entrance at the End is a piece concerned with the interaction of three elements; my own preferences (sound world and a clear formal idea), a performer's agency, and chance. Sound-making is at first governed by independent internal counting (at a rate slower than 60 beats-per-minute), eventually interrupted by an event that begins the final moments. This is a simple piece; I wrote it to consider time, form, and anticipation.
Christine Burke is a graduate from the University of Iowa composition department (MA, 2017). Recent and upcoming performances include the JACK Quartet at NUNC!3, the premiere of Company by the mixed quintet Heavy Air, and a new piece for Alarm Will Sound at the Mizzou International Composers Festival.