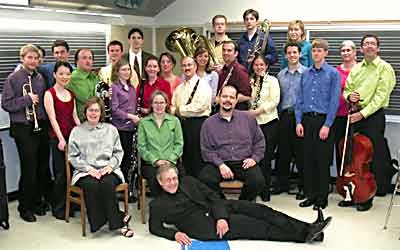 The title comes from two paintings that share a common title, Edge. The paintings, by Phillip Guston and Adolph Gottlieb, face one another on opposing walls in the American Abstractionists room of the University of Iowa Art Museum. (A huge Pollock dominates the space.) I would often go sit in front of these paintings while working on my own Edges. I found the space to be quiet, yet fertile, teeming with creativity. While Edges is not strictly based on either of these paintings, many of the musical ideas came to me while sitting amid, contemplating these fine works of art.

Luke Dahn (b.1976) is in his final year of doctoral studies in composition at the University of Iowa. He holds a bachelor degree in music theory and composition from Houston Baptist University (2000), and a masters degree in composition from Western Michigan University (2003). His principal teachers have included David Gompper, C. Curtis-Smith and Ann K. Gebuhr. He has also studied electroacoustic music with Larry Fritts. In addition to three performances during the Center for New Music tour, Edges will be recorded by the CNM later this spring.

Lem II for contrabass and 15 instruments

This composiition is connected to Lem, for solo contrabass (1983), which in turn is directly inspired by a composition for solo cello called Lame (1982). As Donatoni writes, "Despite being derived from Lame, Lem finds autonomy by developing in opposition. The mutual passages in the two works are absolutely conventional and are suggested by contradictory behaviors and dictated by a compositional conglomeration of musical cells."

Franco Donatoni (1927-2000) - Born in Verona, he began his music education with Bottagisio, and subsequently studied composition with Pizzetti at the Accademia Nazionale di Santa Cecilia in Rome. He took part in the Summer Courses for New Music in Darmstadt four times, and in 1972 he lived in Berlin at the invitation of the Deutscher Akademischer Austauschdienst. The meetings with Bruno Maderna proved an important influence on his artistic development.

Donatoni received many honors during his lifetime. He also made a name as a teacher, lecturing in Turin, Milan, and Bologna, and conducting seminars throughout the world. From 1970 he led summer courses in composition at the Accademia Chigiana in Siena.

For Donatoni, sound becomes the essential element of a work. His works reveal a dramatic, quasi-theatrical sensibility based on a firm comprehension of intervalic relationships, and resulting in rich and contrasting textures. This he achieves by a series of transformations on tiny groups of intervals--employed in rapid succession rather than superimposed, such a compositional process generates varied and differentiated solo lines.

Doublebassist Volkan Orhon's career spans a wide variety of solo, orchestral and chamber music performing and teaching across the country and around the world. He was a finalist and prize winner in the Concert Artists Guild Solo Competition in New York City, and was the co-first place winner of the International Society of Bassists Solo Competition. Mr. Orhon has performed with internationally recognized musicians including Gary Karr and the Emerson String Quartet, and has performed solo with many orchestras.

Mr. Orhon is Assistant Professor of Doublebass at the University of Iowa and principal double bass of the Cedar Rapids Symphony. Born and raised in Turkey, Mr. Orhon began playing the double bass at the age of 12, and spent much of his youth touring Europe with the Mediterranean Youth Soloists. After receiving his bachelor's degree from the Ankara State Conservatory under the tutelage of Tahir Sumer, he became a member of the Ankara Presidential Symphony Orchestra. In 1991, Mr. Orhon came to the United States to continue his studies with Gary Karr at The Hartt School of Music.

Dedicated to his teacher, Arnold Schoenberg, Alban Berg's Chamber Concerto for violin, piano and 13 winds was written between 1923 and 1925, receiving its first performance in 1927. While Berg's previous works (Wozzeck, for instance) had been highly expressionistic, the Chamber Concerto moves decisively towards a more classical style, a scoring suggesting a response to recent work by Stravinsky. The concerto also represented the continuation of a new direction of employing the ordered twelve-tone set. The work relies on the consistent usage of the basic transformation operations of the twelve-tone system -- prime, inversion, retrograde-inversion, and retrograde.

In the "motto", Berg introduces the letters of the names of himself, Schoenberg, and Webern (ArnolD SCHoenBErG, Anton wEBErn, and AlBAn BErG). In fact, threaded through each movement are musical ciphers and numerical analogies that celebrate this partnership. The number three figures prominently in the construction of the piece -- three movements, three principal motives, total number of instruments divisible by three, three principal motives based on the three friends, etc.

The three movements are played without a break--the first movement features the piano, the second the violin, and the third both soloists. The opening movement comprises five variations on a "Thema scherzoso", each of which corresponds to various personalities of Schoenberg's circle, celebrating the idea of friendship. The second movement is dedicated to love: to Arnold Schoenberg's love for his wife Mathilde, who had died in 1923 after a painful illness. The motif of the sequence A-H-D-E permeates the moving Adagio, divided into two halves, the second of which is the retrograde of the first. This juncture is signaled by twelve "bell strokes" sounded on the piano, which in this movement is otherwise silent. The third movement, marked Rondo ritmico, is a recapitulation of the two preceding movements simultaneously. Explained Berg: "It was bringing all these dissimilar components and characteristics together, and finding within them a new movement with a tone completely of its own, that gave the Rondo ritmico its form."

Berg, Alban (Maria Johannes) (b Vienna, 1885; d Vienna, 1935). Austrian composer whose output is among the most influential and important of the 20th century. In 1904 he began private composition lessons with Schoenberg. With his friend and fellow-pupil Webern, he entered the avant-garde artistic life of Vienna.

In May 1914 Berg attended a performance of Buechner's play Woyzeck and determined to make an opera of it. Military service delayed work, but the music was eventually finished in 1922 and was performed in Berlin, December 1925. It caused a scandal but its success with the public was never in doubt, despite critical polemics. By the end of the decade, Berg completed the Chamber Concerto (1925), the Lyric Suite for string quartet (1926), and the concert aria Der Wein (1929). In 1929 began the adaptation of two Wedekind plays as an opera libetto called Lulu. By 1934 he had completed the music in short score and begun full instrumentation. In the spring of 1935 began a violin concerto commissioned by Louis Krasner. Driven by news of the death of the beautiful 18-year-old Manon Gropius, daughter of Mahler's widow by her 2nd marriage, he finished the work in August of 1935, dedicating it 'to the memory of an angel'. Four months later he too died, through blood poisoning from an insect-bite. It has been established that several of Berg's works, including the Lyric Suite, Lulu, and the Violin Concerto, contain musical cryptograms referring to his love for Frau Hanna Fuchs-Robettin (and others). Furthermore, there is recent scholarship that suggests a Berg- Mathilde affair might have existed, and that the second movement is suggestive of such a dalliance.

Berg is still considered the most successful of the so-called dodecaphonic composers. His work is nearer to the Mahler idiom than to the Schoenbergian. In Wozzeck atonality is very freely used and applied to a highly formal structure. From the Lyric Suite onwards, Berg used 12-note procedures nearer to, but still significantly different from, the Schoenberg method. Technical methods notwithstanding, however, it is the emotional content of Berg's music which has awoken a ready response in listeners, particularly the Violin Concerto, which quotes the Bach chorale Es ist genug at its climax.

Originally from Minnesota, violinist Katie Wolfe joined the string faculty of The University of Iowa in 2004. She enjoys a diverse and exciting career as a soloist, teacher, chamber and orchestral musician on the national and international stage. Ms. Wolfe received degrees in violin performance from Indiana University and the Manhattan School of Music. Her principal teachers were Miriam Fried, Sylvia Rosenberg, Mary West, Joey Corpus and Mary Budd Horozaniecki. Immediately after finishing her studies, Ms. Wolfe received the prestigious Fulbright Lecture Award to teach and perform in Bolivia. Prior to teaching in Iowa, Ms. Wolfe taught violin, viola and chamber music at Oklahoma State University for five years, as well as serving as Associate Concertmaster of the Oklahoma City Philharmonic.

Pianist Kazuo Murakami was born in Tokyo, Japan, and has performed as a soloist and chamber musician throughout the world. He studied at Kyoto City University of Arts, New England Conservatory and the Cleveland Institute of Music. He is currently a doctoral candidate at the UI School of Music studying with Uriel Tsachor.