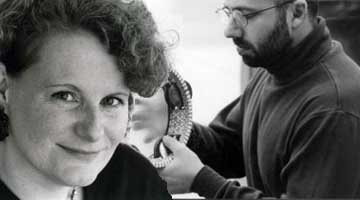 Sole Nero, based in Madison, Wisconsin, is committed to exploring and programming new and existing works for piano and percussion duo. In an effort to contribute to the repertoire of this diverse medium, the duo has engaged in an extensive commissioning/premiering project resulting in ten new works since 2002. Sole Nero has performed extensively in the United States and has appeared in Shenyang and Beijing, China. In addition, the duo has performed at the Percussive Arts Society International Convention, the Society of Composers National Conference, and the MTNA National Conference.

In recent years the Sole Nero's repertoire has included works involving multi-media, including Across a Distance, a theatre production for soprano, deaf actor and video images with piano & percussion duo. Currently, the duo is performing John Luther Adams' Red Arc/Blue Veil with a video created specifically for the piece by Daniel Zajicek. In 2004 the duo released its first compact disc recording on the Equilibrium label titled Music per Due and is currently recording newly commissioned works for their second release.

is the first work in a projected cycle exploring the geometry of time and color…what Kandinsky called "those inner sounds that are the life of the colors." As in all of my recent music, I imagine the ensemble as a single instrument, and the entire piece as a single complex sonority. The computer-processed sounds are derived directly from the acoustical instruments. Red Arc/Blue Veil was commissioned, premiered and first recorded by Ensemble Sirius.  —John Luther Adams

When I think of Alaskan composer John Luther Adams I think of snow, and lots of it. His music contains the temporal qualities of nature, the slow rate of plants growing, or the sun moving across the sky. So nature, or naturalness, became an important theme to me. Because of this, you may recognize some familiar images, like leaves, tree branches, and the sky. In addition, I hoped to put together something that addressed the 'red' and 'blue' contained in the title of this piece, so I tended to color things, or choose images that emphasized those colors. Last, was the static energy of the work. This I borrowed from the wind, and complimented with my own motion as I viewed my natural surroundings.  —Daniel Zajicek

When Gérard died, I was working on a piece for piano and vibraphone of a playful nature. The immense grief that suddenly overwhelmed me led me to abandon the project, of which nothing but the instrument names remained. How better could I pay homage to Gérard, other than writing my very own music, with no reference to his, no signs of his influence? Nevertheless, it was the very violence of the Vortex temporum solo that started my piece off. It was imperative not to study the score, and yet to retain its force and use it as a possible metaphor. I had never had to confront this type of work before. The piece took on the appearance of a ritual, and the vibraphone player found himself with extra instruments such as cow bells, Thai gongs, crotales and woodblocks - all to 'disturb' the piano without actually putting it out of tune, as Grisey had done. For the first time ever, my music will not be objective. I had great difficulty in evaluating the material, and my momentary yielding to complete intuition might not have pleased the dedicatee. The piece is, however, imbued with Grisey's spirit, and could not have seen the light of day without him. "In the end we are all part of society, however we look at it. We have but little, count for so little of what we could call our own, in the purest sense of the term. We, all of us, must accept and learn, both from them who came before us, and from those who are with us now." (Goethe by Eckermann 17-2-1832 in Gespräche mit Goethe)  —Philippe Hurel

Composed for the Madison-based piano and percussion duo, Sole Nero, Musica per Due (Italian meaning "Music for Two") is a two-movement work with a brief, meditative interlude. As a composer I find the vast variety of percussion instruments culled from Latin America, Africa and Asia to be an inspiring addition to those instruments from the Western musical tradition. In Musica per Due I have integrated a small sampling of instruments from the domain of world percussion with the harmonic and melodic sonorities of the most ubiquitous instrument of Western music, the piano. The composition was premiered on the Summer Concert Series of the First Unitarian Society in Madison, WI on July 12, 2002.  —Joseph Koykkar

Equatorial Jungle was commissioned by and dedicated to, Jessica Johnson and Anthony DiSanza of Sole Nero and was inspired by the Henri Rousseau painting by the same name. In 2006 I was lucky enough to see a retrospective of Rousseau's work at the National Gallery of Art in Washington D.C. What struck me about Rousseau's paintings was how beautiful the canvasses were but how incredibly naïve his jungle world really was. Created solely from his imagination, his fecund, large leafed jungles bare no resemblance to any true jungle on earth.

In my piece, Rousseau's busy jungle world opens up to a view of a smoky salon scene in Paris. With veiled hints of the early jazz from the Montparnasse milieu of Rousseau's life, the musical jungle of my work, literally metamorphisizes into a scene from the bar. Once the musical change has happened, the business of the jungle music never quite loses its jazzy side. Still, more aspects pulled from my memory of Rousseau's art are incorporated into my Equatorial Jungle, they are, the rigidity of the subject within the apparent looseness of the actual canvass, and a certain poignancy, which captures for me, Rousseau's personal longing to be accepted into an artistic world that he never quite achieves. Ultimately, there is a sadness that permeates my piece as well as it paradoxically permeates Rousseau's otherwise seemingly vibrant and wild canvasses.  —Laura Elise Schwendinger

is a single movement for piano and marimba/vibraphone combination in three sections lasting about 15 minutes. Various works of art depicting insomnia and sleep have always fascinated me, from Elliott Carter's piano solo Night Fantasies to James Joyce's book Finnegans Wake. As an insomniac myself I know too well the experience of fitful sleep, the techniques to rest one's mind to get to sleep, and the things that harangue the process. The chiming unisons that open and permeate Night Voyages should be interpreted by each listener differently, but for me they are that certain thing that keeps one awake and that must be resolved before moving on to sleep. An obsessive thought, an actual sound indoors or outdoors, even a light. Throughout the "voyages" of the mind on this nocturnal journey this unison idea metamorphoses in its own right, becoming melodic, or working into the fabric of its surroundings. It never really goes away, but becomes accepted. The three sections proper are contrasting musical journeys, each a little shorter than the one before, each taking a different approach to this over-riding concept of uninvited repetition.

I composed this work for Robert Crutchfield (percussion) and Maria Guénette (piano) who premiered the work March 1, 2010 at University of Texas at Tyler. Robert and I were classmates in percussion at the North Carolina School of the Arts, where my composition teacher was Sherwood Shaffer, to whom this work is dedicated. Shaffer's masterful nocturnal music and special relationship with the night-as-muse were but a couple of reasons I thought of him in composing Night Voyages.  —Evan Hause

Composed for Sole Nero piano and percussion duo in 2004, Sojourn is a Korean folk drumming inspired piece. The rhythmic cycles used for the piece, such as 8+9+10+10+9 or 10+6+10+10 are combinations of patterns that are common in folk drumming, especially folk ritual music of traditional Korea. Within cycle, groupings between 2 and 3 are constantly changing to create an active and evolving energy flow. And the large recurring rhythmic cycle produces a distinctive groove. Above this groove of percussion, the piano flows more freely, singing, telling, and chanting a story. It is to give the listeners a chance to sojourn into rural Korea.  —Serra Hwang