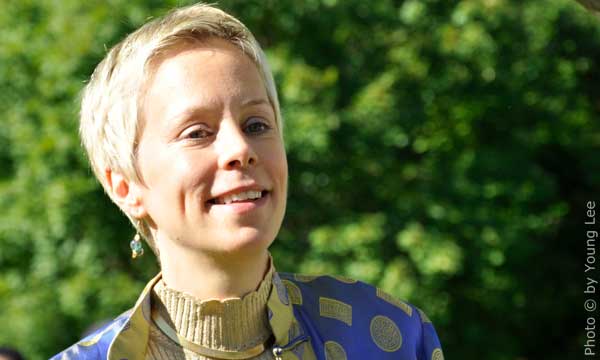 Capricci "Hummingbird Romance" for flute and clarinet
is a whimsical, fanfare-like revelry of five minutes duration, which was made as a wedding gift for Michelle Pellay Walker and Paul Pellay. The world premiere performance was presented by Ensemble Dal Niente, Constance Volk, flute and Katie Schoepflin, clarinet, on May 11, 2014 in Chicago, Illinois.

Twilight Butterfly
I have set many texts over the years as the basis of vocal and choral works, as well as using titles of compositions that offer poetic images. In writing Twilight Butterfly for light lyric soprano and piano, I began with a mental picture — a little story. I wanted to portray someone, viewing a butterfly fluttering on a deep summer evening beneath the twilight moon, whose heart is awakened as she looks skyward. This imagery became so specific that writing my own lyrics was almost inescapable.
The musical score uses many adjectives and descriptive phrases to communicate the character and spirit of the music. There is a sense of eternal resonance and timelessness throughout, as the sustain pedal is never lifted. I have kept in mind several musical considerations beyond the evocative, impressionist nature of the piece. Dynamics are incredibly nuanced (only six dynamic levels are used!), and every minor gradation is sculpted and finely notated. I even encourage multiple realizations ("chose your own dynamic shape"), all in an attempt to provide a comfortable performance environment for the singer.
The musical texture subdivides into three layers that weave together throughout the entire song. Loud, bell-like resonances occur in the lower staff of the piano part. The soprano's vocal line occupies a middle layer, and elegant and sensuous arabesques appear in the top two staves of the piano part. Throughout Twilight Butterfly, the three layers "trigger" one another in a very mobile, flexible and changeable relationship. Piano and singer never do anything together; the constant give-and-take allows even more collaboration because there is no direct synchronization of parts.
Twilight Butterfly was commissioned by Ravinia Festival President and CEO Welz Kauffman, Program Director Kevin Murphy and Ravinia's Steans Music Institute in honor of the institute's 25th Anniversary in 2013. The world premiere took place at Ravinia on August 12, 2013. Twilight Butterfly is dedicated with admiration and gratitude to Kristin Lancino.
— Augusta Read Thomas

Passion Prayers
Commissioned and premiered in 1999 by The Network for New Music in Philadelphia, Jan Kryzwicki conducting with Scott Kluksdahl as solo cellist, the micro-concerto, scored for soloist and 6 instruments, has a duration of 9 minutes. The music falls loosely into 3 parts that are played without a pause: moderate, slow, fast.

Sun Songs — Three Micro Operas
If there's one thing Emily Dickinson knew for sure, it was what a good poem should do. "If I feel physically as if the top of my head were taken off, I know that is poetry," she wrote. Dickinson was attempting to describe for her sister-in-law the power of poetry to envelop and even to devastate the reader (or listener). Her physical description was an effort to convey that successful poems are not weakling, tiny delightful breezes or passages or bookish exercises; they are chillingly theatrical and annihilating.
Composing for voice is my first passion in life, and as a result the largest part of my catalogue is music for voice: solo voice, chamber opera, small groups of voices, small or large choirs, with and without orchestral or other kinds of accompaniments. For me, the human voice ‹ possibly the most subtle, complex, and fragile yet forceful, flexible, seductive, and persuasive carrier of musical ideas and meanings ‹ has always been an inspiration for and influence upon my entire musical thinking. I sing when I compose. I adore reading poems, and cherish the opportunity to set them to music; and I believe that text plus music (1+1) must equal at least 24. If 1+1=2, there is no need, for me, to set the text to music.
Emily Dickinson's poems are intensely personal, intellectual, introspective, and offer a meditation on life, death, and poetic creation; her poems share a close observation of nature as well as consideration of religious and philo- sophical issues.
Poetry, the Belle of Amherst knew, is that form of communication in which words are never simple equivalents of experience or perception. The words themselves, the words as words, have a life as sounds, as images, as the means for generating a series of associations, and as such are very inspiring. Poets insist on seeing and hearing words as if each is a multi-faceted gem has, in the hands of the skillful artist, the capacity to resonate and to go in multiple directions at once.
Sun Songs — Three Micro Operas, for Mezzo-soprano (or Soprano or Countertenor) and 3 Percussion was commissioned by DePauw University School of Music. Amy Barber and her colleagues presented the world premiere performance on 26 February, 2006. The Three Micro-Operas, all setting poems about the sun by Emily Dickinson, are colorful, varied, and last a total of about 8 minutes.
— Augusta Read Thomas

Bassoon Concertino
Commissioned by and dedicated with admiration and gratitude to The Danish Chamber Players and bassoon soloist Gunnar Eckhoff, Bassoon Concertino was premiered on April 6, 2014 in Copenhagen in Tivoli Concert Hall and has a duration of 10 minutes.
The work is in three parts (fast, slow, faster,) is based on beautiful works of art, and offers homages to three Danish composers.
Part #1: Paul Klee: Rope Dancer: Homage to Hans Abrahamsen;
Part #2: Wassily Kandinsky: Sky Blue: Homage to Bent Sørensen;
Part #3: Joan Miro: Ladders Cross The Blue Sky In A Wheel Of Fire: Homage to Poul Ruders.
It is rare that we get to hear a work that showcases the bassoon player. This Concertino requires exceptional virtuosity of the soloist featuring playing of all kinds - rhythmic, athletic, punchy, lyrical, delicate, jazzy, whimsical, capricious, elegant - and celebrates the amazing artist and beautiful instrument in all its colors.

Grammy winning composer, Augusta Read Thomas’s impressive body of works embodies unbridled passion and fierce poetry. The New Yorker Magazine called her "a true virtuoso composer." Championed by such luminaries as Barenboim, Rostropovich, Boulez, Eschenbach, Salonen, Maazel, Ozawa, and Knussen, she rose early to the top of her profession. Later, as an influential teacher at Eastman, Northwestern, Tanglewood, now she is the 16th ever University Professor (one of five current University Professors) at The University of Chicago. Former Chairperson of the American Music Center, she has become one of the most recognizable and widely loved figures in American Music.
Thomas was the longest-serving Mead Composer-in-Residence for Daniel Barenboim and Pierre Boulez with the Chicago Symphony from 1997 through 2006, a residency that culminated in the premiere of Astral Canticle – one of two finalists for the 2007 Pulitzer Prize in Music. During her residency, Thomas not only premiered nine commissioned works, but was central toward establishing the thriving MusicNOW series. Upcoming commissioners are from the Boston Symphony, the Utah Symphony and the Tanglewood. She won the Ernst von Siemens Music Prize and many other awards.